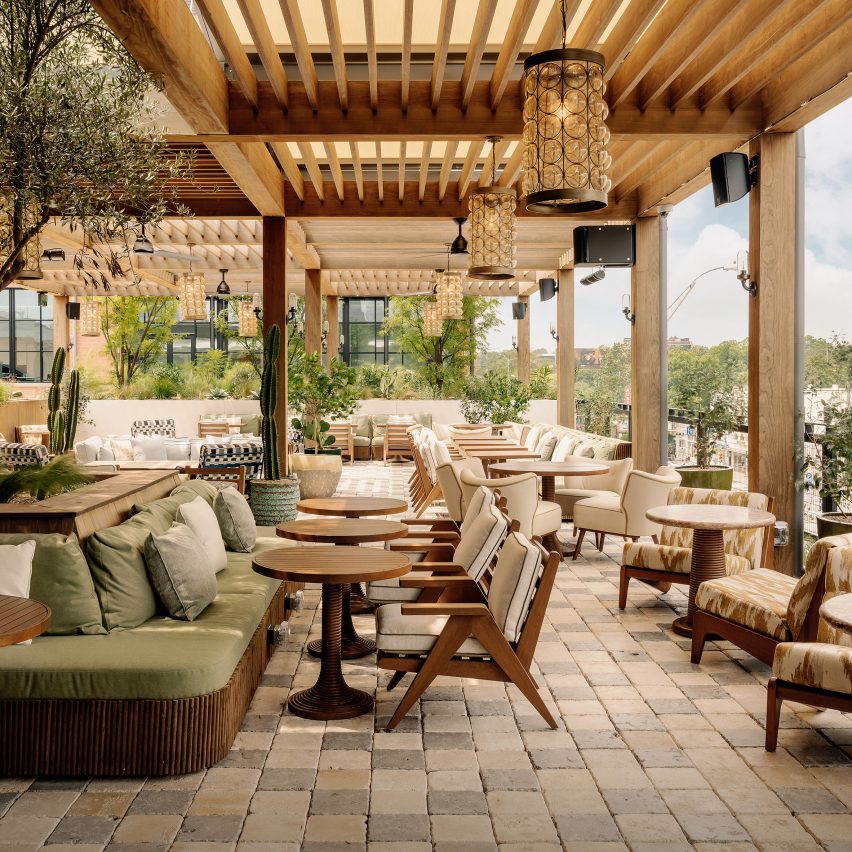 Members club Soho House has opened a location in Austin, Texas, with interiors influenced by regional styles and pieces sourced from local craftspeople.

The newest addition to the roster of clubs and hotels around the world, Soho House Austin occupies two floors of a new development called Music Lane on the city’s trendy South Congress Avenue.

Restaurant, bar and lounge spaces opened to members on 25 May 2021, while phase two – a 46-room hotel and a variety of event spaces – are due to welcome guests later this month.

Throughout the spaces, the team at Soho House Design has employed colours, patterns, materials and motifs that embody the spirit of Texas modernism, a style that blends modernist forms with materials and designs indigenous to the region.

Spanish influences – also commonly found across the southern US state – are woven into the interiors as well, in the form of limewash walls, vintage furniture and sisal floors.

“Our House in Austin is the first Soho House in the southern states,” lead designer Harriet Liley told Dezeen. “Located in a new building, we worked hard to bring authenticity to the design. We have created a space that feels aged and loved instantly, from the material selections to the furniture style and artwork.”

All visitors enter via a reception area at ground level, where reclaimed timber flooring, an oversized sofa and linen curtains set the aesthetic tone for the spaces beyond.

To the right is a bar and lounge for enjoying snacks and drinks before showings in the adjacent screening room, in which members can relax in velvet armchairs and get cosy in cashmere blankets.

Two floors up, a terrace wraps the perimeter of the building and accommodates an outdoor dining area, part of which is covered by a wooden pergola that has a gap for a large tree to grow through.

Banquette seating and low-slung chairs are upholstered in pale fabrics that complement the wood furniture, planting, and limestone tile flooring.

The checkered tiles extend inside to the club area that features a central bar with a carved wooden front, along with stone tables and leather seating. Linen lanterns hang from a dark reclaimed-timber ceiling.

Local ceramicist Keith Kreeger was tapped to create a series of large lamps, and artworks by Austin natives like Deborah Roberts and a host of young emerging talents pepper the interiors.

Murals created specifically for the site include one in the inner stairwell by Hayley Mitchell that takes cues from ancient mythology as depicted in modern art.

A second mural by Desireé Vaniecia can be found beside the rooftop pool and “employs a figurative practice to challenge stereotypes and tell stories of African American women”.

“We built atop our base palette to bring the house to life by layering local Austin artwork, statement vintage furniture and rugs sourced in Texas, a mix of natural linens, aged leather, colorful tribal prints, and beautiful ceramic collaborations,” said Liley.

The pool area is reached by a cacti-lined pathway and is surrounded by loungers upholstered in a Texan-influenced print.

“Our pool bed fabric was a design by Clarence House that we fell in love with, inspired by Mexican heritage,” Liley said. “We loved the fun nature of the motif, sitting against the bright checkered floor below.”

Bedrooms are spread over the upper two levels, and are decorated with tiled floors, sisal rugs, linen drapes and headboards, and lime plaster walls to add a Spanish flavour.

Wardrobes are either formed from exposed metal frames or carved out from the walls and disguised by a curtain.

Larger bedrooms have access to outdoor terraces populated with lounge furniture that sits on terracotta flooring.

Soho House Austin also has a music room for hosting member events and live performances, and an adjacent green room with its own entrance.

Over the past decade, Austin has evolved into a creative hub and a popular tourist destination, with the South Congress area forming a commercial heart for restaurants and hotels.

Places for visitors to stay include Hotel Magdalena and the Austin Motel – both a stone’s throw from Soho House.

Meanwhile, options across the river in the Downtown neighbourhood include the Austin Proper Hotel and Residences with interiors by Kelly Wearstler, and the Line Austin in a renovated mid-century tower.

Soho House was founded in 1995 in London, but has grown into a network of members-only spaces that spans Europe, America and Asia. Some of its most newest clubs include Downtown LA, Brooklyn and Mumbai, while Tel Aviv, Paris and Rome are all slated to open in 2021.

Photography is by Chase Daniel unless specified otherwise.