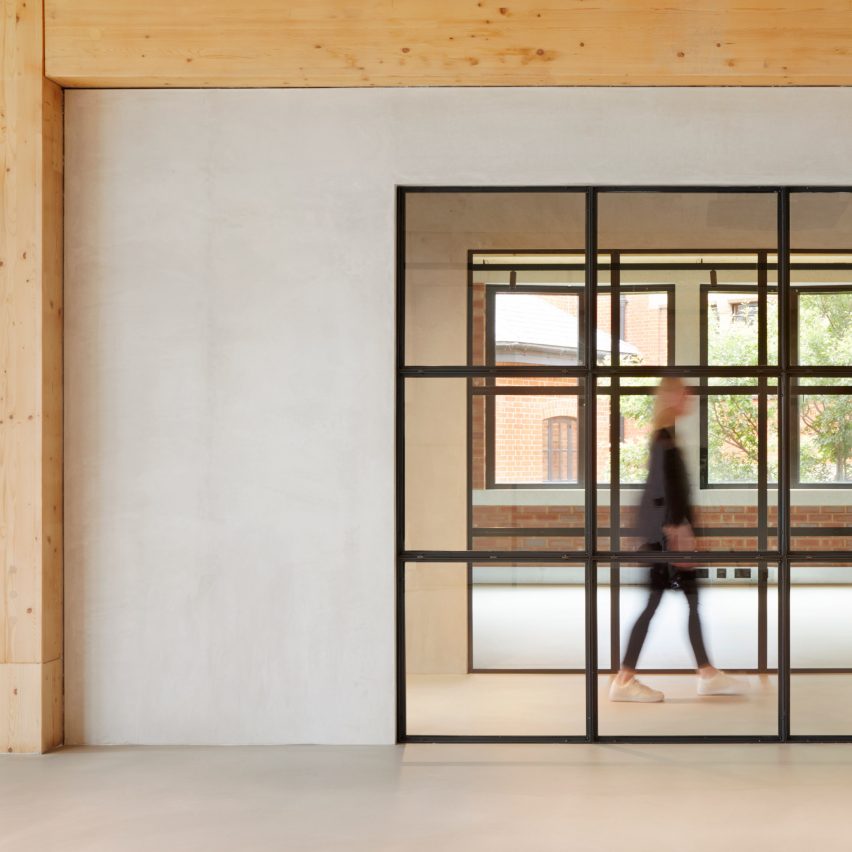 Architecture studio Squire and Partners has added a co-working facility to its own London office, in a new building framed by cross-laminated timber.

The Department Store Studios is a five-storey building offering flexible workspace along with facilities that include a movie screening room, a bar and a restaurant.

It adjoins the former Bon Marche department store in Brixton, a previously abandoned building that Squire and Partners converted into its own workspace back in 2017.

With this new addition, the architecture firm hopes to support the burgeoning local creative scene. Co-working residents can potentially make use of facilities in both this new building and the converted department store.

According to Tim Gledstone, partner at Squire and Partners, the intention from the outset was to create a culture of cross-collaboration between the firm’s employees and other artists and designers based in the area. The company will operate the entire facility itself.

“We’ve created a whole business here,” he told Dezeen during a tour of the building. “In many ways, it was just building on what we already had with The Department Store.”

“As soon as we opened The Department Store, people started asking if they could have some desk space,” added Maria Cheung, the studio’s head of interior design. “So we knew the demand was there”.

Conscious of the environmental impact of a new-build structure, the architects chose to use mass timber for the building’s primary structure. The building boasts a cross-laminated timber (CLT) frame that offers natural soundproofing and airtightness.

The design challenge was finding a way for this material to feel at home alongside the raw and characterful aesthetic of the old Bon Marche building.

“Our clients who would come to The Department Store would almost invariably say, this is a pretty fabulous place, but you could never do this with a new building,” said senior partner Michael Squire. “Because really, the magic you’ve got is what you’ve revealed.”

One tactic that the designers employed was using textured brickwork for the building’s facade. Some of the bricks were snapped by hand and laid to face outwards, giving an uneven quality to the building’s exterior.

Inside, the CLT structure was left exposed wherever possible and pared with industrial finishes like screed flooring. Faceted bay windows with dark frames echo the style of the Crittall windows in The Department Store, while lighting and electrical fixtures are left on show.

“CLT was the best technical choice, and with that came immediate soul, warmth and nature,” said Gledstone. “We’re celebrating this structure inside the building.”

The Department Store Studios is located on the north side of the original building, with access via Bellefields Road. The two buildings don’t join, although they share a courtyard where an established oak tree was recently planted.

The ground floor of the building accommodates a members’ lounge and the Bellefields bar and restaurant, where terracotta pendant lights, marble-topped tables and wooden dining chairs help to create a Mediterranean-inspired feel.

The four floors above contain a mix of different workspaces, including open-plan co-working for individuals and private studios for between six and 72 people.

Phone booths and bookable meeting rooms are dotted throughout, along with kitchen spaces and lounge areas. The aim was to create spaces that facilitate different types of working, inspired by the way that spaces are used in The Department Store and other Squire & Partners projects like the Ministry of Sound co-working.

This thinking extends to the interior design, where the colour palette and furniture choices reflect different times of day and different moods.

“One thing we’ve learned from our workspace experience is to design for moments in time and states of mind,” said Gledstone.

“We’re using colour for its psychosomatic energy, either to calm or excite, and we’re linking it to seasons or moments in the days in different rooms,” he continued.

“So even though some meeting rooms sit in the same place above each other, some are muted with calm evening tones and relaxed furniture, others are designed for breakfast.”

A communal terrace can be found on the third floor, while the fourth floor – expected to be let to a single tenant – has its own roof terrace.

The screening room can be found in the basement, allowing the space to be used as a mini cinema. This floor also includes bike storage, lockers, showers and changing areas.

As well as the paying members, Squire and Partners has created a residency programme offering 12 month of free workspace to two local entrepreneurs. The first residents are Gabriella Lafor, who helps find media careers for Black British talent, and textile designer Coco Cripps.

“It’s really a place where people can work in their own space, but also be part of a community,” said Cheung, “and that’s a sense that we really want to amplify and encourage.”

The post Squire and Partners uses mass timber to add co-working facility to its London office appeared first on Dezeen.