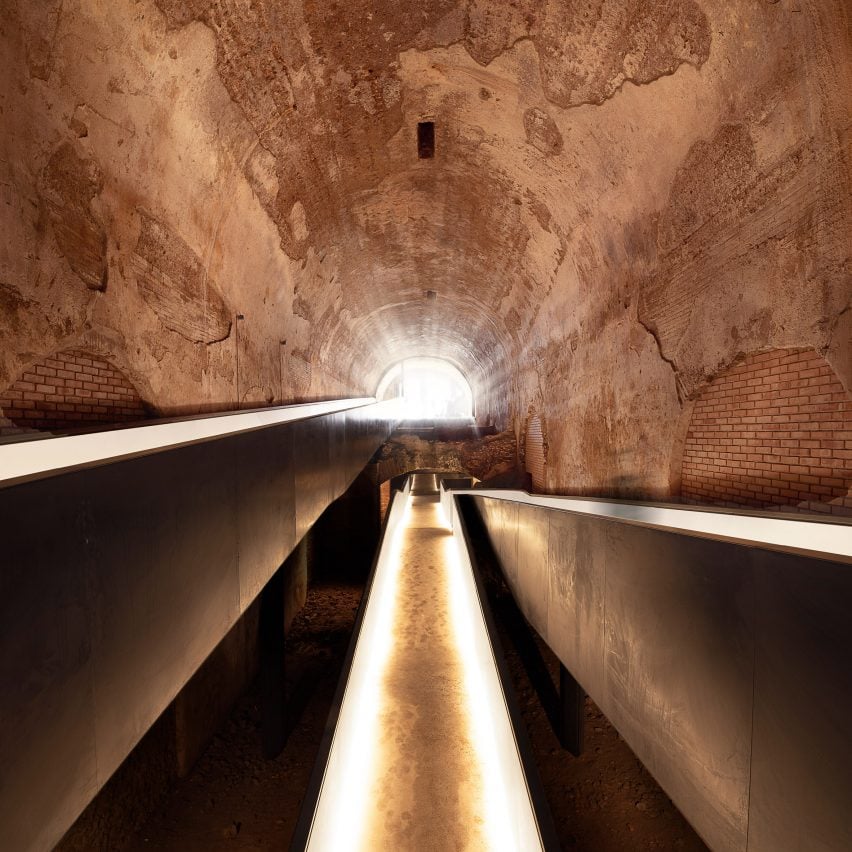 The new entrance is situated within Oppian Hill Park and connects with the walkway that leads to the spectacular Octagonal Room almost six metres below.

The palace built by Emperor Nero after the great fire in 64 AD is one of Rome’s most important historical sites. The interventions developed by Boeri’s Milan-based studio slot in around the existing ruins without disturbing them at all.

“The project of a new entrance to the Domus Aurea and of a pedestrian walkway to access the Octagonal Room represented an extraordinary opportunity […] to bring back to the attention of the city one of the most evocative realities of history and Roman architecture,” claimed Boeri, “allowing each visitor to descend directly into the heart of Nero’s Domus.”

The Domus Aurea’s excavated passages, vaults and hundreds of rooms require regular restoration and have been closed to the public for much of the past several decades.

Following the latest restoration phase, the Domus Aurea planned to reopen in 2020 with an exhibition dedicated to the Renaissance artist Raphael, who was inspired by paintings discovered at the site in the late 15th and early 16th centuries.

The exhibition scheduled to coincide with the 500th anniversary of Raphael’s death was postponed due to the coronavirus pandemic and eventually opened on 23 June 2021.

The exhibition is presented in the Octagonal Room and five adjacent rooms, which are the culmination of the new entry experience.

Visitors enter from the park into a vestibule housing a ticket desk and bookshop. Screens made from galvanised and black-painted steel with bronze details mark the new entrance and can be closed to secure the site.

The vestibule space incorporates an arched window overlooking the walkway, which descends gradually through a dark, vaulted gallery displaying layers of construction unearthed during the excavations.

The walkway is supported by steel beams concealed behind panels of galvanised and painted sheet metal that lend the structure a robust and monolithic appearance.

LED lighting incorporated along the full length of the walkway highlights the white-resin path and illuminates historical elements along the route.

The interventions are designed to sit within the existing walls and Trajan vault without touching them or compromising their structure in any way.

The self-supporting framework was constructed manually without the use of machinery or welding equipment that could have damaged or altered the microenvironment within the Domus Aurea.

“The decision to carry out a light intervention gives users an immersive space, a unique opportunity to observe the ruins from above, up close and even to cross them, reaching the final point of access to the Octagonal Room,” added Boeri’s studio.

The walkway leads into the Octagonal Room, which was originally Nero’s banquet hall and is topped with a concrete dome and oculus.

The architects inserted a vertical screen into one of the arched portals surrounding the space, which conceals a lift and the final section of the walkway.

The screen, which follows the proportions of the opening it is located within, can also be used in conjunction with exhibitions as a backdrop for projecting images and videos.

Architect Stefano Boeri is perhaps best known for his Vertical Forest concept, which involves incorporating planters for trees and other vegetation on tall buildings such as the Bosco Verticale towers in Milan.

The system is also being applied to apartment blocks in Egypt’s new administrative capital and a tower in Tirana, Albania, that will be planted with colourful and scented flowers and herbs.

Boeri is also acting as curator for the upcoming Salone del Mobile furniture fair in Milan. He set out his vision for the event in an interview with Dezeen earlier this year.