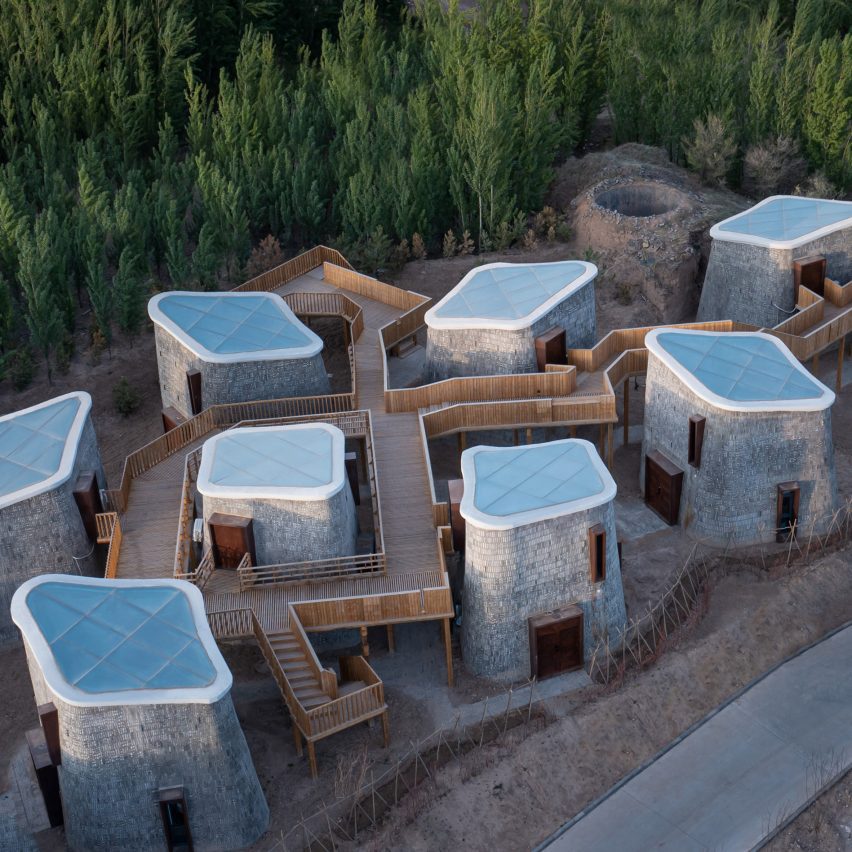 Studio Avoid has completed a retreat in China‘s Hebei province comprising a series of cave-like brick-clad pods connected by a raised walkway.

The village of Xiyaotou in the Zhangjiakou prefecture contains a network of traditional cave dwellings, which provided the inspiration for the interconnected vertical pods forming the Grotto Retreat Xiyaotou.

“The design concept starts with the radical difference between the rural and urban interpersonal networks,” said Macau-based Studio Avoid, “and reinterprets the native cave dwellings of the site as vertical ‘grottos’.”

“By flowing the bridge of connectivity in between the private grottos, the design attempts to realise a community in which public and private coexist.”

The hostel’s pods are arranged according to a four-by-six-metre grid based on the length-to-width ratio of the original cave houses. Their seemingly irregular placement and organic forms complement the natural properties of the surroundings.

Each unit rises to a height of seven metres and features curving walls made from a double layer of grey brick.

The pods are topped with large skylights that enhance the verticality of the spaces by drawing the eye upwards, while also allowing sunlight to warm the interiors.

The double-layered brick walls help to retain warmth during the colder months, while the shape of the structures and the position of windows creates a chimney effect to help discharge heat in the summer.

Openings scattered across the surfaces of the accommodation units emphasise their irregular forms. These doors and windows feature pre-weathered steel reveals, chosen to complement the naturally patinated material palette.

Bricks that protrude from the elevations at certain points mark the position where the bricklayers’ scaffolding was supported during the construction phase.

A wooden bridge structure raised above the ground on pine columns weaves between the pods and connects the entrances at first-floor level.

The elevated walkway provides views across the landscape and, along with the void between the accommodation pods, can be used as a space for hosting workshops, markets or exhibitions.

The hostel was developed as part of a programme aimed at revitalising rural villages in China that have been affected by migration to newer residential areas.

The programme supports the redevelopment of abandoned villages by transforming them into hubs providing accommodation, local cuisine and activities for visitors.

Grotto Retreat Xiyaotou’s separation into a cluster of individual units means the programme could be adapted in the future according to the community’s evolving requirements.

Other recent projects in rural China include a lantern-like artwork by MAD founder Ma Yansong and a group of shingle-clad pods nested in a forest.

Photography is by Guo Zhe.