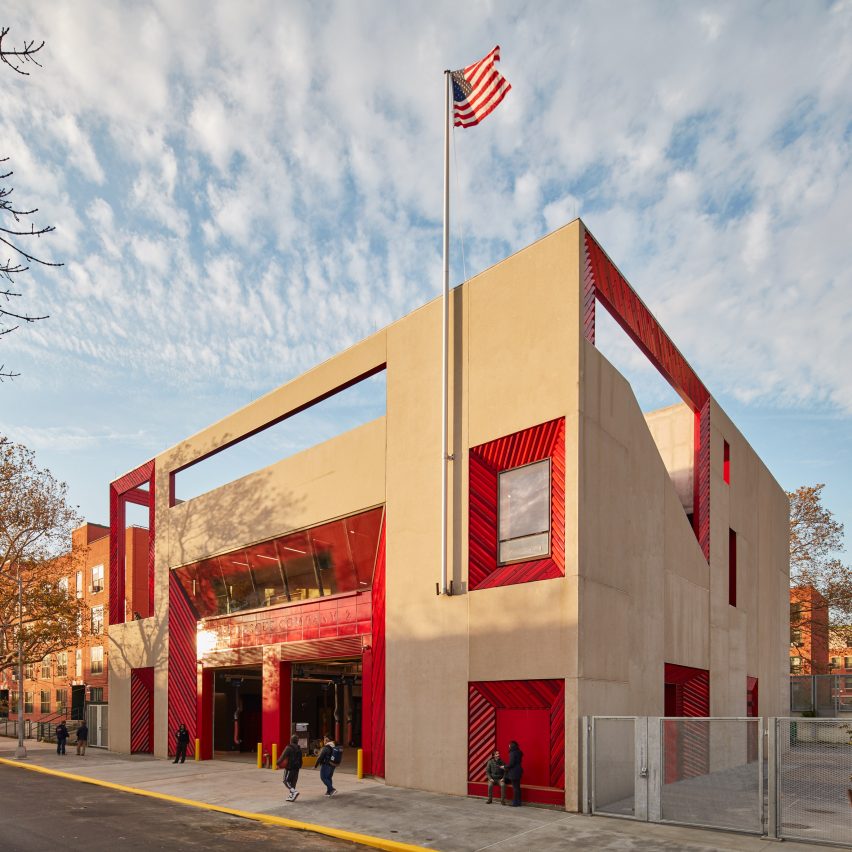 Studio Gang has completed a fire station for Brooklyn’s elite force that doubles as a simulation and training facility for extreme rescue situations.

The new headquarters for the FDNY’s Rescue 2 unit is located in Brownsville, Brooklyn. Each of New York’s five boroughs has a dedicated Rescue team.

These teams are highly specialized in extreme conditions that include rappelling down buildings, navigating collapsed structures, and even deploying for underwater rescue operations.

The building serves as the elite unit’s headquarters, where the firefighters sleep, train, and coordinate their operations.

“The rescue company is trained to respond to various emergency scenarios, from fire and building collapses to water rescues and scuba operations,” said US firm Studio Gang.

“The new Rescue Company 2 facility is designed as a tool for training, enabling FDNY’s elite force of specialized rescue workers to stage and simulate a wide range of emergency conditions in, on, and around the building,” the studio added.

The building is organized around a three-storey-tall volume that is meant to accommodate firefighters’ rappelling training. On the exterior, various anchor points similarly allow the firefighters to practice using the building itself.

“The void enables the team to practice rescue scenarios that mimic conditions common to the city, using its height and associated elements of balconies, bridge, doorways, ladders, and stairs,” Studio Gang explained.

“At the same time, it introduces natural light and fresh air, improving the quality of everyday life within the building,” they added.

The ground floor contains two garage bays for fire trucks, which are flanked by the classic firefighter poles, as well as easy-access storage for a wide variety of tools and building materials that may be needed in an emergency.

At the back, facing a courtyard, the architects included a kitchenette and conference room, where on-duty firefighters spend their time between operations. 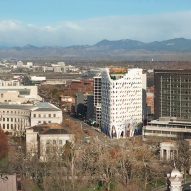 The top two floors contain a range of rooms for the normal operations of the unit, including bunk rooms, a gym, and administrative offices. On the roof, the architects included planted areas and a space for the firefighters to enjoy the outdoors.

The concrete building is fronted with terracotta tiles that recall the red colour typically used for fire engines. These colourful accents line the surroundings of the windows, drawing attention to the building’s function from the exterior.

“On the exterior, red glazed terracotta panels surround a smaller-scale series of voids (windows and doors) with highly crafted details animating these points of connection between the facility and the community it serves,” the architects explained.

Studio Gang is headquartered in Chicago and has offices in New York City, San Francisco, and Paris. Other notable projects by the American studio include an expansion to the American Museum of Natural History, and a twisting residential tower in San Francisco dubbed Mira.

The photography is by Tom Harris.