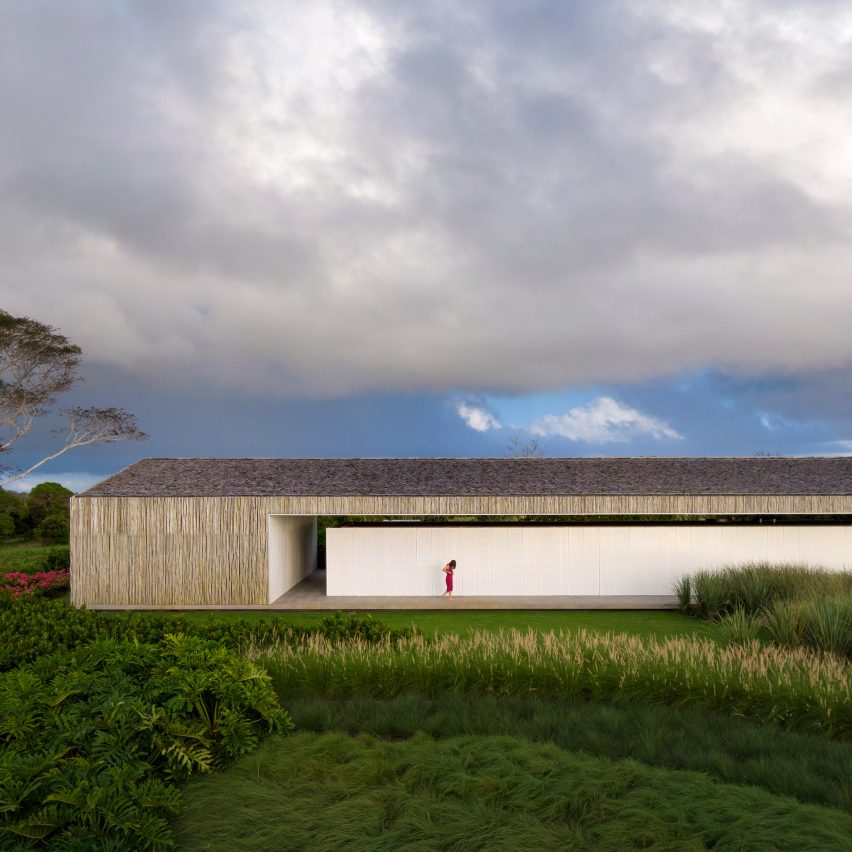 Studio MK27 has designed a Brazilian seaside villa with wide openings to frame views of the surrounding landscape “like a wide-angle camera”.

Vista House is located in Trancoso, a tranquil seaside town in Brazil’s Bahia province. Studio MK27, which is led by architect and filmmaker Marcio Kogan, completed the 8,343-square-metre home in early 2020.

The residence home sits on top of a 46-metre-high cliff above Transco’s sea escarpments, which are “sculpted by the lagging and constant action of Bahia’s waters” according to the firm.

The position and view of the ocean heavily influenced the design, as did the material palette of the tropical environment.

“From a bird’s perspective, the elongated volume aims to frame the landscape like a wide-angle camera,” said Studio MK27.

The home is made up of a low-slung, gabled roof that is roughly 15 metres wide, 3.5 metres tall, and 60 metres long.

This impressive span is only enclosed at either end, where MK27 placed the kitchen and primary bedroom, respectively. The outside of the structure is wrapped in eucalyptus staves, while the roof is sheathed in hand-carved wooden shingles.

The remainder of the home is conceived as an indoor-outdoor living space.

“Its horizontal proportions are delineated by the extrusion of a cottage elemental section, which generates a 60-metre-long wooden roof,” Studio MK27 explained.

“Rooted by closed volumes in its edges, which contains the master suite and the kitchen, the house opens itself to the colours surrounding through an immense wide-screen span overlooking the infinite blues,” added the architects.

In addition to the primary bedroom, the home has four additional bedrooms contained within a smaller volume that is inset from the exterior walls.

The material used to build this the interior envelope is known as Viroc, which the architects explain is a wood-and-cement composite panel.

“Under the roof, an open-air veranda permeates the span, connecting the gardens on either sides and surrounding a white lower box,” said Studio MK27. “Independent of the main structure, this inner house can open itself completely as the Viroc panels work as folding screens.”

The architects chose a restrained palette of creamy tones and wood for the interior walls and furniture.

These polished interiors contrast the softer, organic look of the exterior. 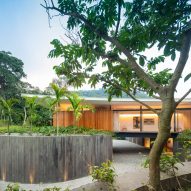 The team also gave careful consideration to the interaction between Brazil’s strong sunlight and the materials.

The use of the perforated Viroc and the spindly eucalyptus sections creates interesting shadow patterns throughout the home, and the expansive overhanging roof ensures that the residents can enjoy the outdoors in any weather condition.

“The outside views swoop inside the interiors spaces through soulful textures that refract and reflect light, creating a dance of light and shadows on each surface, specially through the biriba slats and the Viroc perforated walls,” said Studio MK27.

Other projects by the São Paulo-based firm include an off-grid residence in the rural region of Catuçaba, and an apartment in São Paulo for a family with three children that hosts guests frequently.

The photography is by Fernando Guerra.