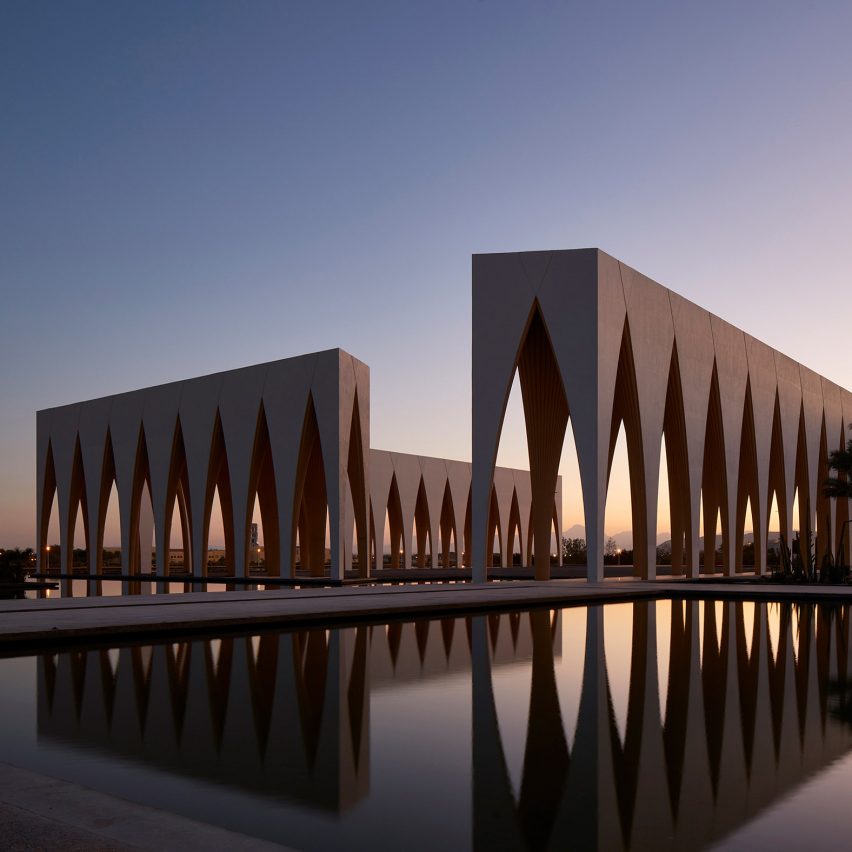 London-based Studio Seilern Architects has enclosed the Gouna Festival Plaza in the Red Sea resort of El Gouna, Egypt, with a trio of colonnades.

Built within an artificial lagoon, the plaza is the first stage of the Gouna Conference and Culture Centre, which was designed to be a landmark cultural destination for the resort town.

“Our client wanted to put El Gouna on the map, culturally speaking, and commissioned us specifically to create an architectural vision that achieved this,” said Christina Seilern, principal of Studio Seilern Architects.

“The idea was to give Gouna a cultural venue that would unify the town in a strong urban gesture, and give it a new point of focus with a captivating cultural venue,” she told Dezeen.

The plaza was developed for Egyptian-Montenegrin businessman Samih Sawiris, who owns the resort town and previously commissioned Studio Seilern Architects to design the Andermatt Concert Hall in Switzerland, as the first stage of the cultural complex.

A 600-seat concert hall and a conference centre, also designed by Studio Seilern Architects, will be built within the plaza over the next couple of years.

It was designed to be a multifunctional space that will host the annual El Gouna Film Festival, sporting events and concerts as well as functioning as a public plaza between events.

“We wanted to create a beautiful new public space with a dual function,” said Seilern.

“It will act as a venue for a wide range of major cultural events, and the ground for a concert hall and conference centre, the next two phases of the project,” she continued.

“It should feel like an awe-inspiring and captivating public space for events such as the Gouna World Squash tournament or the film festival, or feel intimate and welcoming for a wedding or festive gatherings, while also acting as a tranquil and wonderful place to visit when not in festive use.”

Set on a series of artificial islands, a trio of spaces is enclosed by three L-shaped colonnades.

The concert hall will be built within the central plaza and the conference centre in the southern area, with the northern section left as a flexible space. 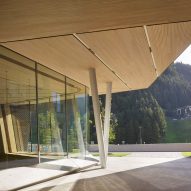 The 20-metre-high colonnades, which are the tallest structures in El Gouna, were designed to define the complex architecturally while providing shade from the sun and shelter from wind.

“We want the visitor to feel awe and wonder when they arrive,” said Seilern. “The scale of the colonnade is counteracted by the softness of the internal cladding of the colonnades.”

The staggard and interconnected columns were made from glass-reinforced concrete, with a sand-coloured interior profile and a white, flat exterior.

“The warm sand-like colouring of the column cladding is evenly lit at night, appearing as a large sculpture reflected in a mirror-like body of water,” Seilern continued.

“The effect that we sought is one of absolute peace – a space for reflection which can turn into a festive place for gathering.”

Studio Seilern Architects aimed for the architecture to draw on the grandeur of ancient Egyptian buildings along with Moorish influences.

“We are contextualists and were keen to create an architecture that reflects the impressive architectural legacy of ancient Egyptian architecture,” explained Seilern.

“We were keen that the design emerges from a language that relates to the history and culture of the site,” she continued.

“The use of the arch was generated from the notion that the arch is a Moorish invention. Combined with the monumental scale of Egyptian architecture, such as is seen in Luxor, we played with this idea by oversizing the perimeter columns.”

Studio Seilern Architects has previously created a restaurant on top of Mount Gütsch in the Swiss Alps, a charred-timber performing arts centre in Berkshire and a house on a rocky ledge above an African dam.

The photography is by Paul Riddle.