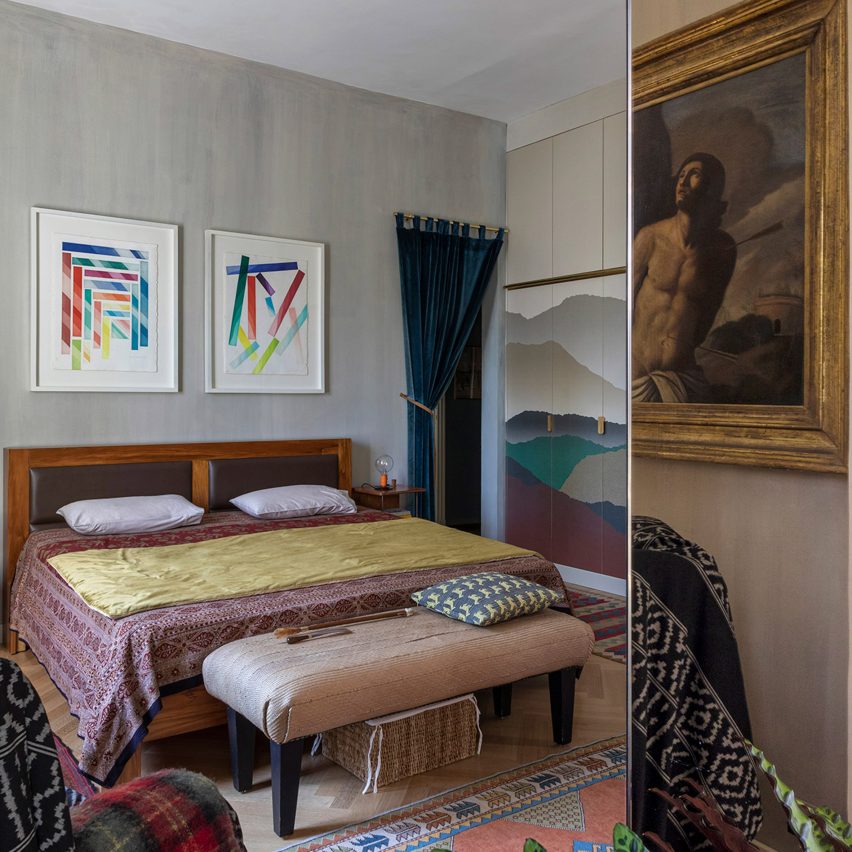 Antique and mid-century furnishings are combined with sleek contemporary cabinetry in this intentionally unfinished apartment in Rome, designed by local architecture and interiors studio 02A.

The one-bedroom flat belongs to a stateless diplomat, who asked 02A to turn his home into a sanctuary that he could return to at the end of his frequent work trips.

The owner also wanted a place to display the extensive collection of furniture and craft objects he has accumulated during his travels.

“The client has given us a wider opportunity to reflect on the concept of home as a place of belonging, even more so when it is not lived in on a daily basis,” said architect Marco Rulli, who co-founded 02A together with Thomas Grossi.

“The project was a journey into his memory and aspirations through a constant and free dialogue.”

The apartment takes up 130 square metres on the ground floor of an early twentieth-century building in Rome’s Flaminio district, a few steps from the National Gallery of Modern Art and the MAXXI Museum.

It has a generous garden and is surrounded by nature, nestled between the eastern bank of the Tiber river and the urban vegetation of the Monti Parioli hills.

The apartment’s entrance opens onto the living area, where a glass wall cuts through the decorative barrel-vaulted ceiling.

In the adjacent kitchen, this ceiling is painted terracotta red and paired with brushed granite worktops alongside white and yellow wall units that complement the building’s original flooring.

Engraved on the backsplash of the scullery is a phrase written in Esperanto, a universal language developed for international communication in the late 19th century.

Translated to English, it reads: “he who is firm in his ideas is noble, but he who is able to change them is even nobler”.

Next to the kitchen, the lounge features restored parquet flooring made of solid oak, which serves as a backdrop for a couple of leather sofas, French art deco armchairs from the 1940s and an antique Venetian lantern, alongside a selection of photographs and sculptures.

A set of French doors opens out onto the home’s private garden, which is shaded by a huge palm tree and surrounded by shielding vines and Swiss cheese plants. 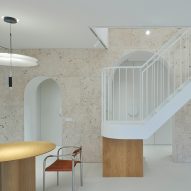 An arched passage with a custom integrated bookcase leads from the lounge to a more intimate dining area, where an Illan birch pendant lamp by Luceplan hangs above a glass-surface table set with 1950s chairs.

The apartment’s bedroom, study and two bathrooms are separated from the rest of the plan by a small doorway.

This sleeping area was the main focus of the project, according to 02A. The bedroom was conceived as a suite with a small open bathroom, which is screened off from the rest of the space by smoked mirrored screens.

The bathroom’s reflective walls create what 02A describes as an “immaterial cubic volume”, camouflaging the ensuite while diffusing the light streaming in from the three large windows that run along the apartment’s southwest side.

One side of the bedroom is lined with made-to-measure wardrobes covered in Ukiyo wallpaper by French design brand Nobilis, which was informed by traditional Japanese woodblock prints.

Next to the bathroom is a study furnished with upholstered vintage theatre chairs and a projector mounted on the ceiling. The room is completed with a writing desk by Italian brand Desalto and a Serbelloni armchair, created by the late industrial designer Vico Magistretti for De Padova.

“We tried to play with the concept of time,” said 02A. “We didn’t want a finished house. We were interested in giving space to the unfinished, to the imperfection that would contain the vital force of curiosity.”

The idea of creating an intentionally imperfect or unfinished interior is popular among designers. Peeling plaster, raw concrete and dangling wires give character to these spaces, which look as though they’ve been abandoned halfway through decorating.

The photography is by Serena Eller.

The post Styles and eras mingle inside "unfinished" diplomat's home in Rome by 02A appeared first on Dezeen.