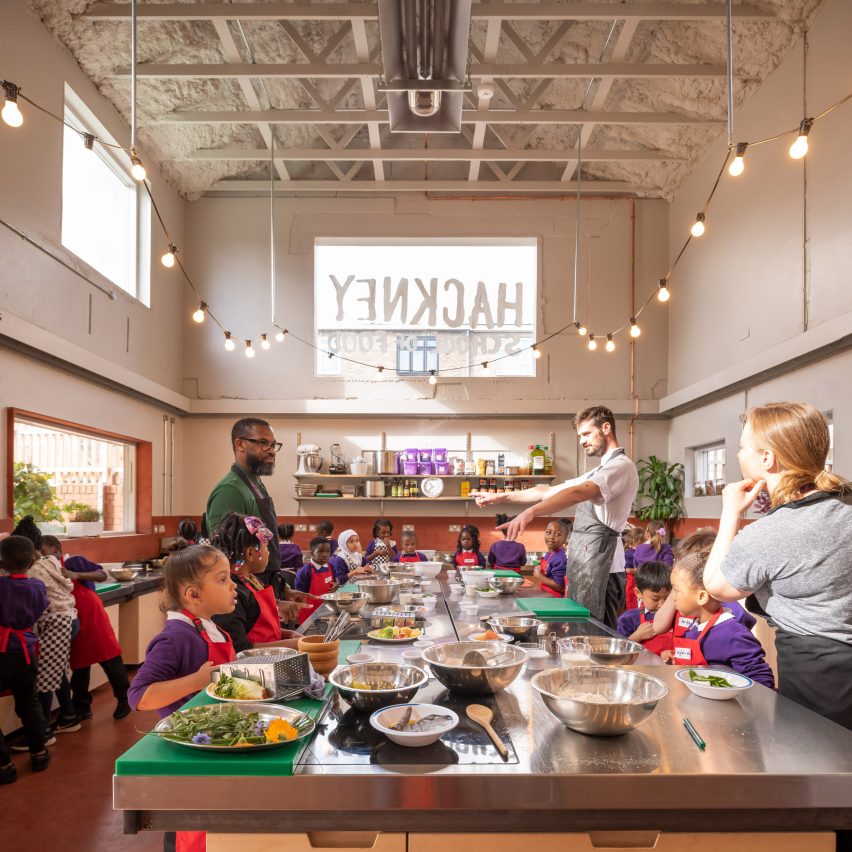 Architecture studio Surman Weston has created a teaching space for children to learn about food in Hackney, London, which has been awarded the Stephen Lawrence Prize 2022 by the RIBA.

Named the Hackney School of Food, the project occupies a red-brick house adapted by Surman Weston into a community hub for the area in east London.

The project was chosen for this year’s Stephen Lawrence Prize in recognition of the impact it has had, which “is not limited to this one site”, according to the Royal Institute of British Architects (RIBA) jury.

“The architect and client have developed an inspirational blueprint to teach others how to regenerate and enliven their own communities in a similar way,” chair of the judging panel Matthew Goldschmied.

“This bold and inventive investment exemplifies the power of architecture to transform not only the building it touches, but the community it serves.”

The Stephen Lawrence Prize is awarded annually by the RIBA to celebrate emerging architectural talent and projects with a construction budget of less than £1 million.

It was established in 1998 in memory of Stephen Lawrence, a student architect who was murdered in a racist attack five years prior.

The award-winning Hackney School of Food was built within a disused red-brick house once used by the school keeper at Mandeville Primary School.

While its exterior has been preserved, Surman Weston removed the first floor to convert its interior into a voluminous double-height space that can accommodate a class of 30 students. 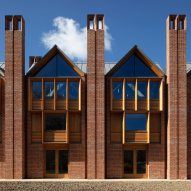 The studio made the decision to adaptively reuse the existing structure due to a limited budget and site area. The result, it said, is a “robust, unfussy and joyful” building.

Outside, unused gardens have also been transformed into spaces for the children and community to eat, cook and grow food, while a blank street-facing elevation has been animated with a picture window and a mural by illustrator Jean Jullien.

“We know that the educational and wellness benefits of Hackney School of Food will be transformative for the community,” said Surman Weston’s director Percy Weston.

“The architecture is an enabler for a great cause, and it’s been a pleasure to contribute our expertise to a project with far-reaching impact.”

This year’s award panel included chair Goldschmied, the managing trustee of the charity Marco Goldschmied Foundation, along with Stephen Lawrence’s mother Doreen Lawrence and the winner of last year’s prize Mike Tonkin, who is co-founder of Tonkin Liu.

Surman Weston were revealed as the 2022 winners last Thursday at an award ceremony at the RIBA, during which the recipient of the prestigious Stirling Prize was also revealed.

The Stirling Prize 2022 was given to Niall McLaughlin Architects for its design of The New Library at Magdalene College at the University of Cambridge. It was the fourth project by the studio that had been shortlisted for the award, but the first to win it.

The post Surman Weston uses architecture as "enabler for a great cause" at Hackney School of Food appeared first on Dezeen.