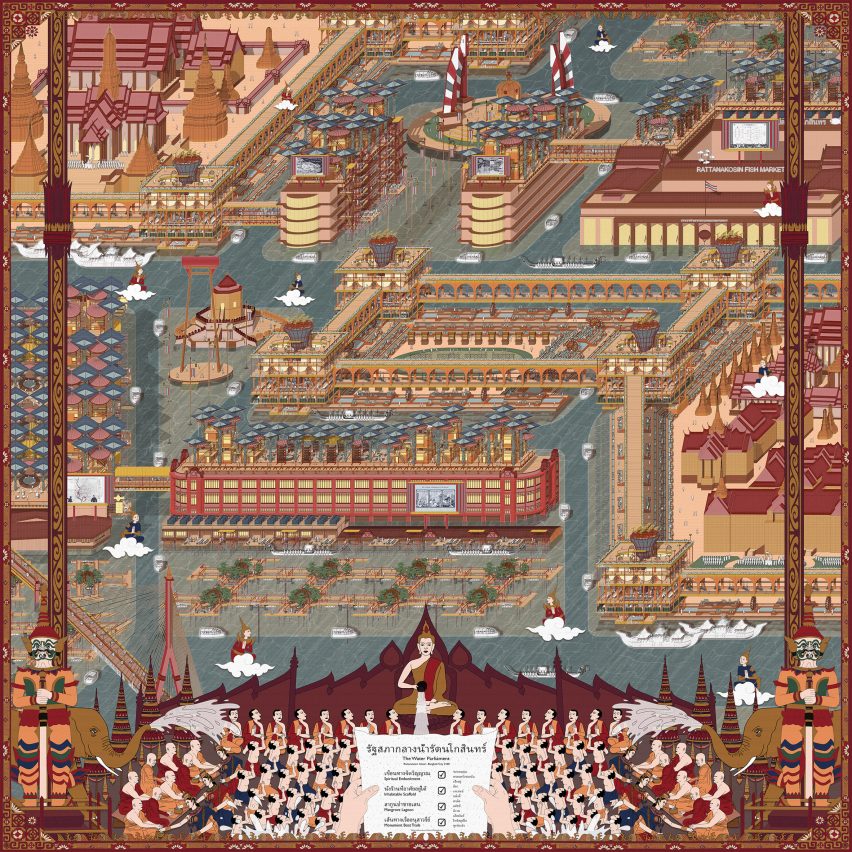 A floating fish farm and a water-based Parliament for Bangkok in 2100 are included in Dezeen’s latest school show by students at National University of Singapore.

Also included is a project to repurpose telephone exchange buildings as infrastructures of counter-surveillance and a park with architectural inventions added to recreate the spatial language of cruising.

“The NUS M.Arch Show 2021 showcases the thesis projects of the graduating Master of Architecture students from the National University of Singapore; a collection of bold questions and propositions displaying the expertise obtained in architectural education. A year-long undertaking, the thesis is an arduous yet joyful journey, where conversations, critiques and references gently nudge students towards certain contemporary and relevant trajectories, organically converging into communities of practice where the works collectively resonate with one another.

“Convergence occurs along five discursive threads, which form the five clusters of the show: Critical Architecture, History & Heritage, Sociopolitics & Geopolitics, Technologies and Urbanism & Environments. Each cluster is uniquely positioned to probe the limits of the discipline, and to respond to the demands of wider society.

“Critical Architecture interrogates the discipline itself. The thesis work in this cluster seeks to identify and challenge architectural convention, forming propositions of design that provoke, satirize, or gently disturb the expectations of architecture and what the field encompasses.

“History & Heritage gathers sites and stories that were lost in the pursuit of rapid development and urban progress. The theses of this cluster anchor onto overshadowed historical and cultural artefacts; through this they consider a spectrum of strategies and positions that navigate the tricky entanglement between the oft-conflicting demands of the past and present.

“Sociopolitics & Geopolitics deliberates on architecture’s capacity to contribute to the public good, at the crossroads of policy, ideology and society. Fieldwork and research bring to light fissures in the built environment that emerge from manifold agendas. The theses take aim at these socio-spatial injustices. Alternative hierarchies, boundaries, notions of work, welfare, and education are imagined – potential futures in which these status quo might be destabilised through optimism and design.

“Technologies argues that architecture, entwined with making, doing and craft, cannot be divorced from the techie which influences it. Thus, technology, no longer mere device for representation, has become a tool for thinking, optimising and materialising ideas into form. The theses featured in this cluster capitalize on these advancements, offering a window into architecture’s future.

“Urbanism & Environments takes the position that architecture is inherently ecological, mediating an extensive network of relationships beyond our immediate, perceptible senses. The cluster recognises the need for new economies to emerge; its propositions suggest new ways of living amidst large scale forces such as increasing urbanisation, the pandemic and global warming.

“Moving through the five exhibitions of our show, the five threads intersect and overlap, creating a hazy cloud of interrelationships and connections that we find as interesting as the individual work themselves. As thesis projects turn into continuous research embarked by the authors, it is also paramount that these ideas flow and are made public, to be reinterpreted and to exist in the future work of others. Our show will gather people and audiences through several events for this purpose, and we hope that the conversations that avail will appeal and excite the community.” 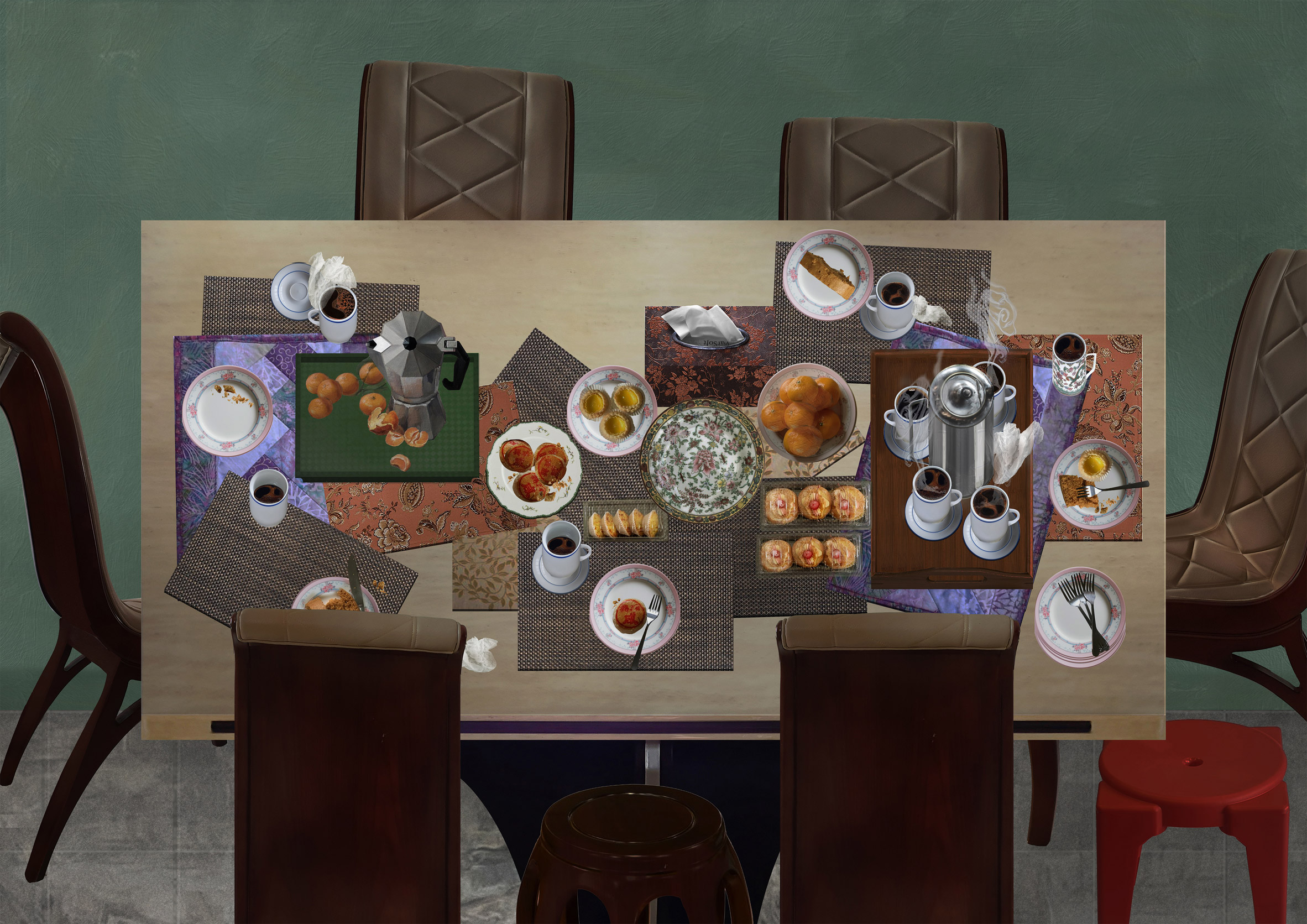 How To Live With Another

“This thesis begins at home, with my grandmother and her helper Asri. It ends by testing the potentials of architecture – its epistemological and professional capacities to address the production of space speaking to social and class-based proximities.

“Presented from occupants’ perspectives through photography and ethnographic videography, how to live with another is politically gendered in its concerns for architecture’s intersection with, and manifestation of, equity and voice.”

“This thesis treats the banal practice of architecture as an aesthetic project. Through the simple set-up of a game, three scenarios in practice are played out, mainly focusing on the performance of client and architect in the design of a residential programme.

“Normal Architecture reveals the compromise, friction and fighting activity hidden behind the perfect facade of architecture. This performance is a simulation of practice, a team sport rather than an artistic activity, taking shape directly to impact form and aesthetics. By exaggerating these moments into strange details, the entangled stories of architects, clients, and engineers are told.” 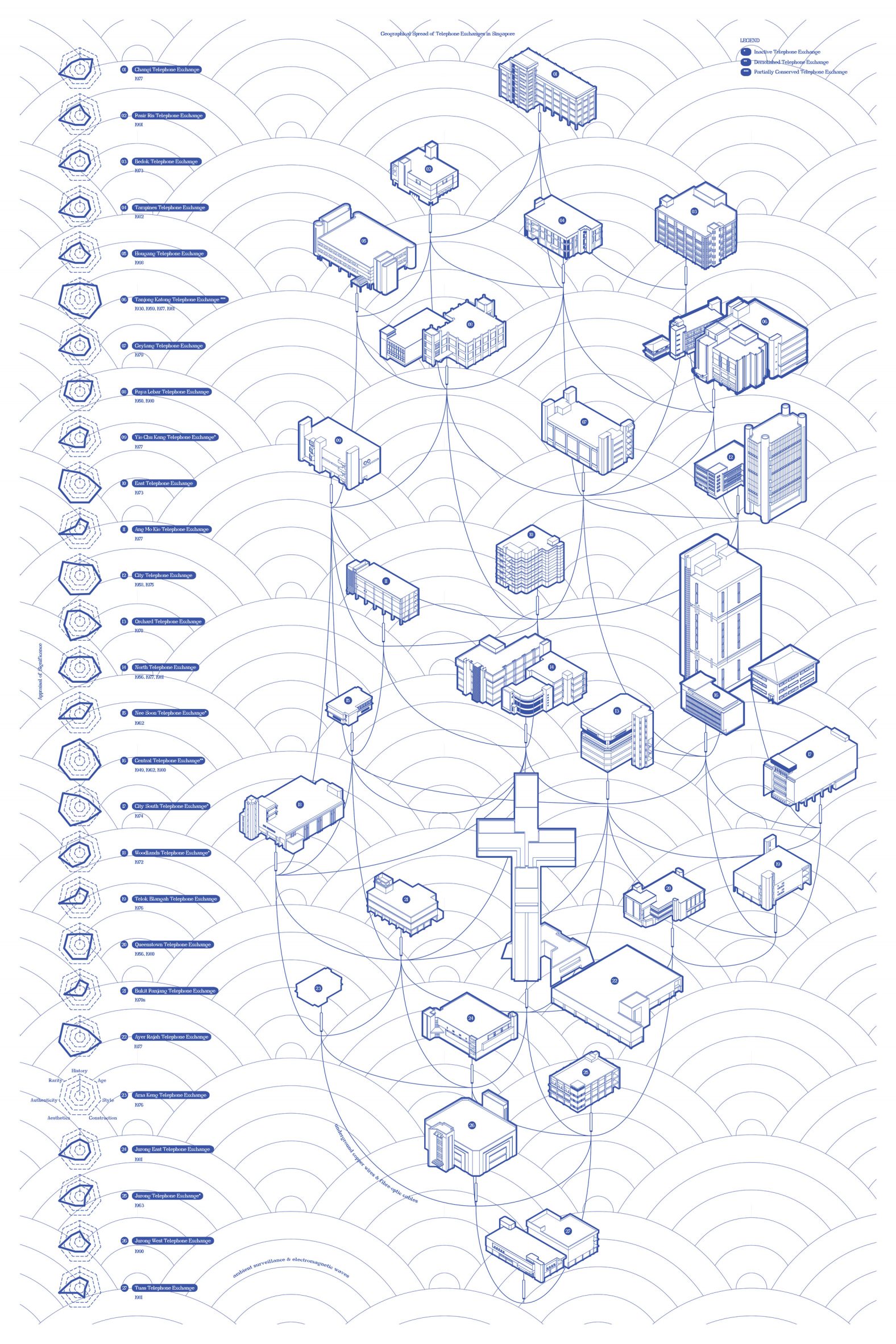 “A Higher Calling is an attempt to repurpose telephone exchange buildings as infrastructures of counter-surveillance. The improvement of telecommunication technology has led to the demolition of telephone exchanges despite their architectural rarity and heritage significance.

“While these infrastructures heralded in a new era of mass communications, they also expedited the onslaught of unwarranted and widespread surveillance. Building upon their characteristic architecture – island-wide geographical placement, visual inconspicuity, underground inter-connectivity, and windowless disposition – the thesis argues that networks of telephone exchange buildings should be conserved and repurposed as spaces of refuge and avenues for recourse, against an increasingly inevitable surveillance climate.” 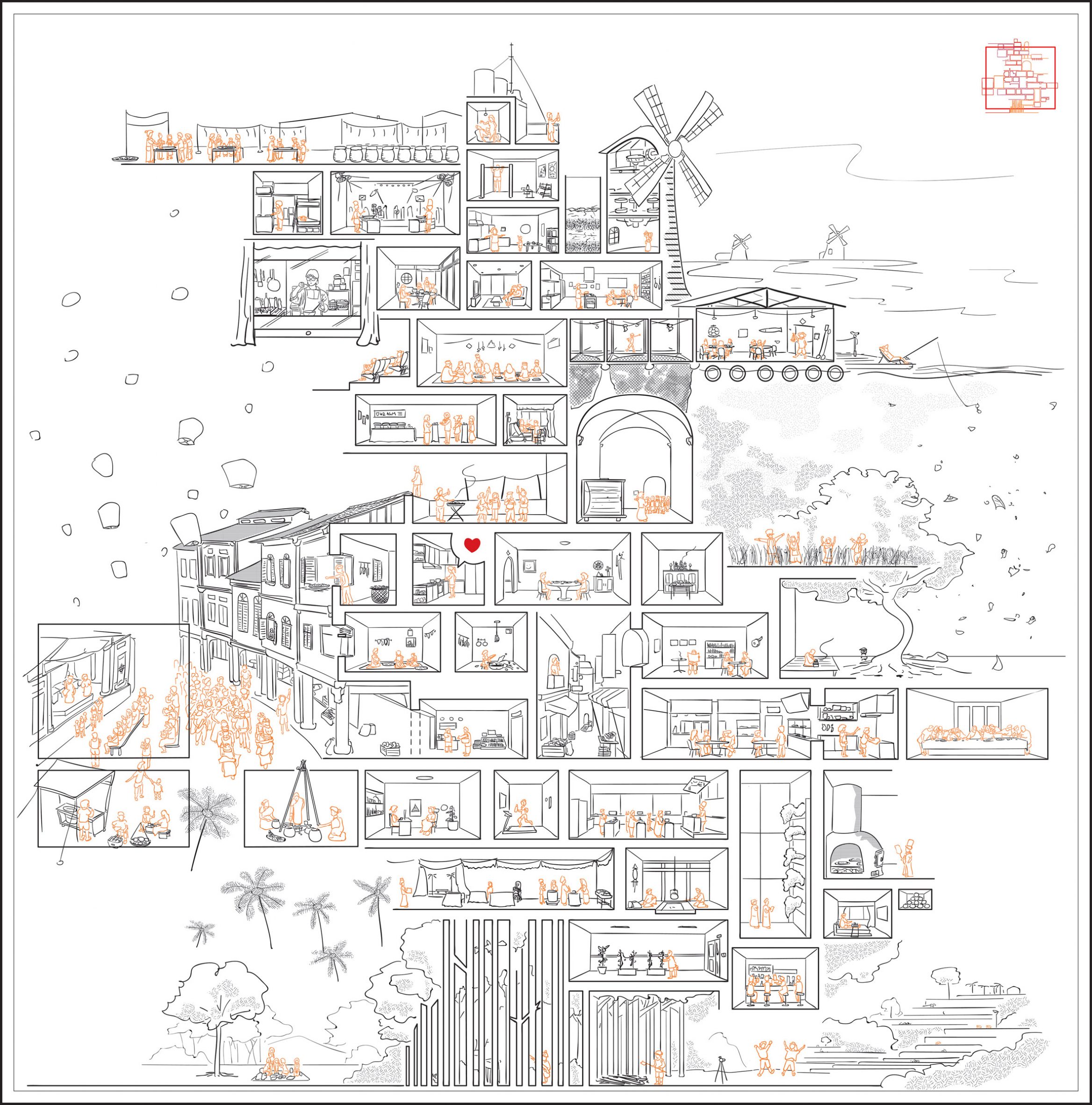 To Food, With Love: Architecture of an Intangible Culture

“Despite being intangible, hawker culture is indeed very much dependent on the spaces used to produce, distribute, prepare, and consume food. But what does it mean for the architecture when what is deemed as important heritage is not the building, but the activities contained within?

“Culture is not static, and neither is our culinary landscape made from just kitchens and dining tables. Yet we remain fixated on an idealised physical manifestation, the hawker centre, as the sole space of hawker culture, disregarding other spaces and processes. What then, is the scope and role of architectural design in conserving hawker culture?” 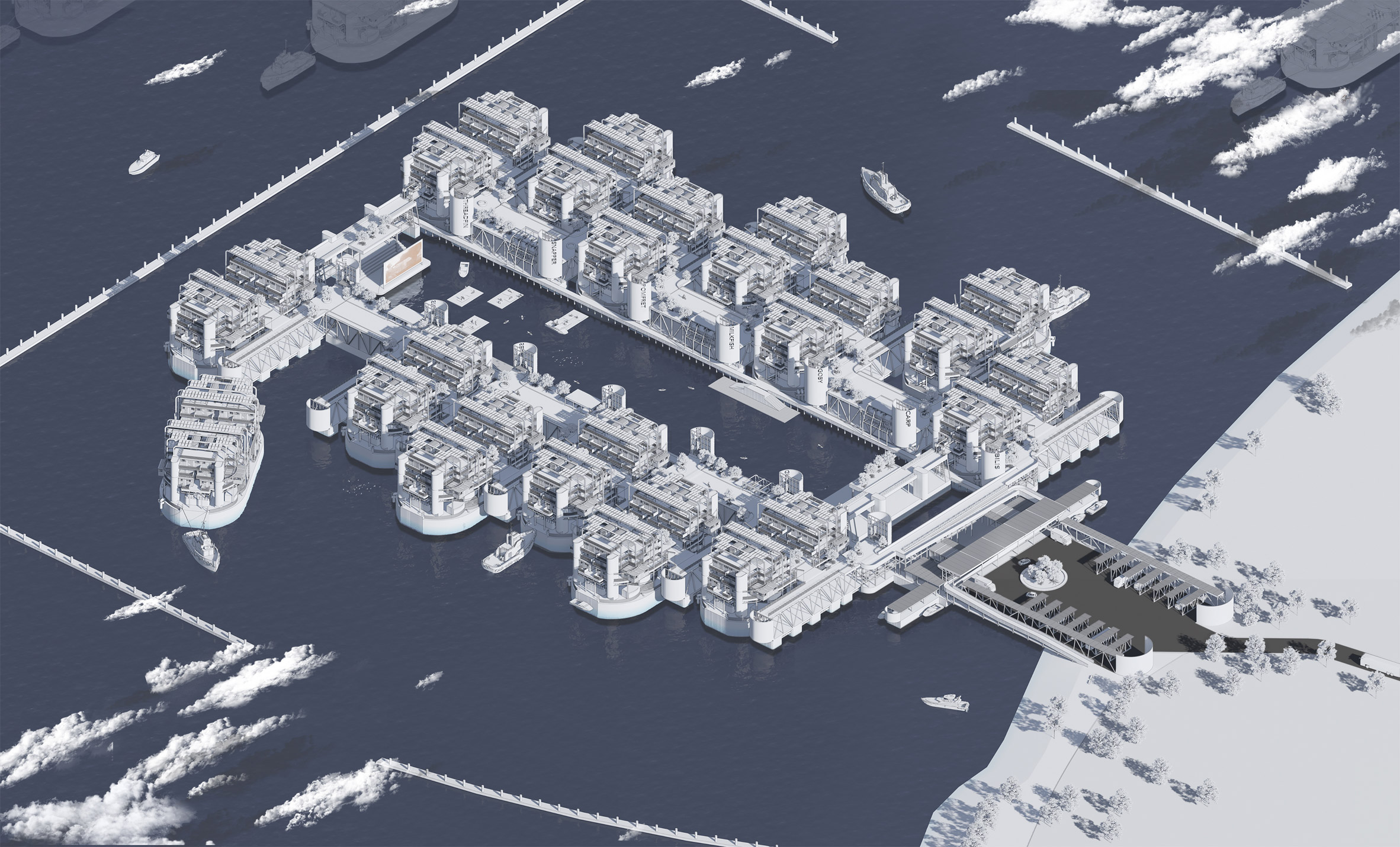 “The transient nature of workers housing and the growing demand for locally farmed fishes in Singapore provide temporal considerations to this architectural exploration. The co-location of worker dormitory and a fish farm on a floating platform is a hybrid architecture that capitalized on the coastal environment, mutualism as well as time-sharing arrangement of space to rethink better dwelling for the workers.

“As the demand for migrant workers in Singapore decreases in the future, spaces in these floating platforms can be transformed for fish farming or redeployed for other sea-based economic opportunities.” 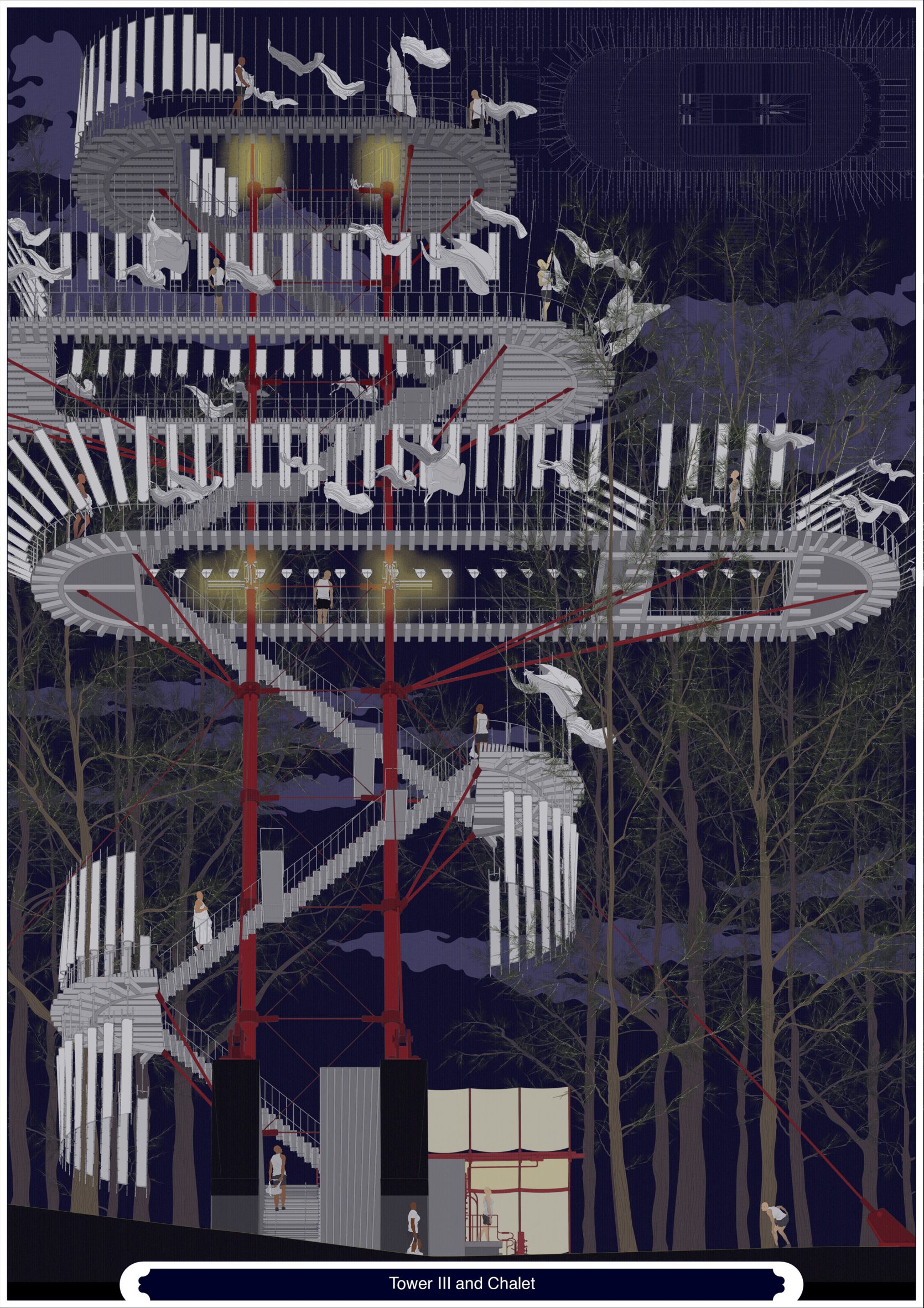 “The Pleasure Fields is a park that negotiates queer space and time in Singapore. Research into local cruising spaces concludes that the queer body’s existence depends on its spatial and temporal context. Thus, the project proposes a counterpoint to how the body is state-programmed to reproduce future citizens via the heteronormative family unit.

“On an urban scale, the proposal experiments with how architectural interventions could ally with the site’s trees and topography to gradually de-closet the queer body. Five architectural typologies then illuminate the spatial language of cruising through layering and appropriating spatial configurations previously known only to the cruiser.” 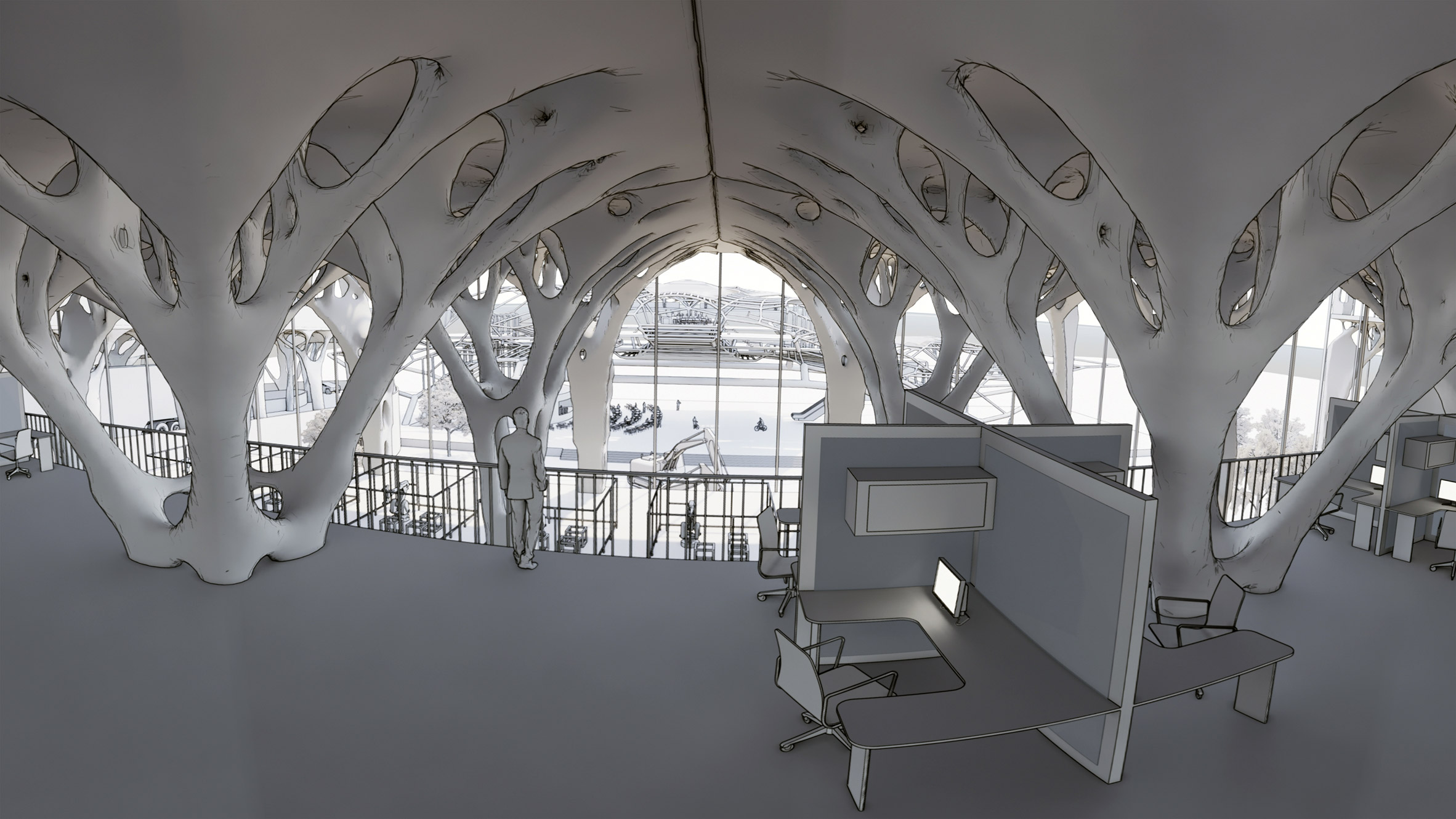 “Deconstruction / Reconstruction is a thesis that attempts to relook at architecture through the lens of structural optimization and digital fabrication. Reacting to the zeitgeist of the Fourth Industrial Revolution and Carpo’s Second Digital Turn – the thesis deconstructs architecture into its elements, applying breakthrough structural optimization methods to the process of their design.

“Through a study of Topology Optimisation, Evolutionary Structural Optimisation (ESO), Graphic Statics, and Stress Line Analysis through recent work by Block, Xie and Akbarzadeh – the thesis studies how current design processes could be augmented with these structural toolkits and fabricated using digital fabrication methods such as 3D printing with the aim of reducing the material utilized in construction.” 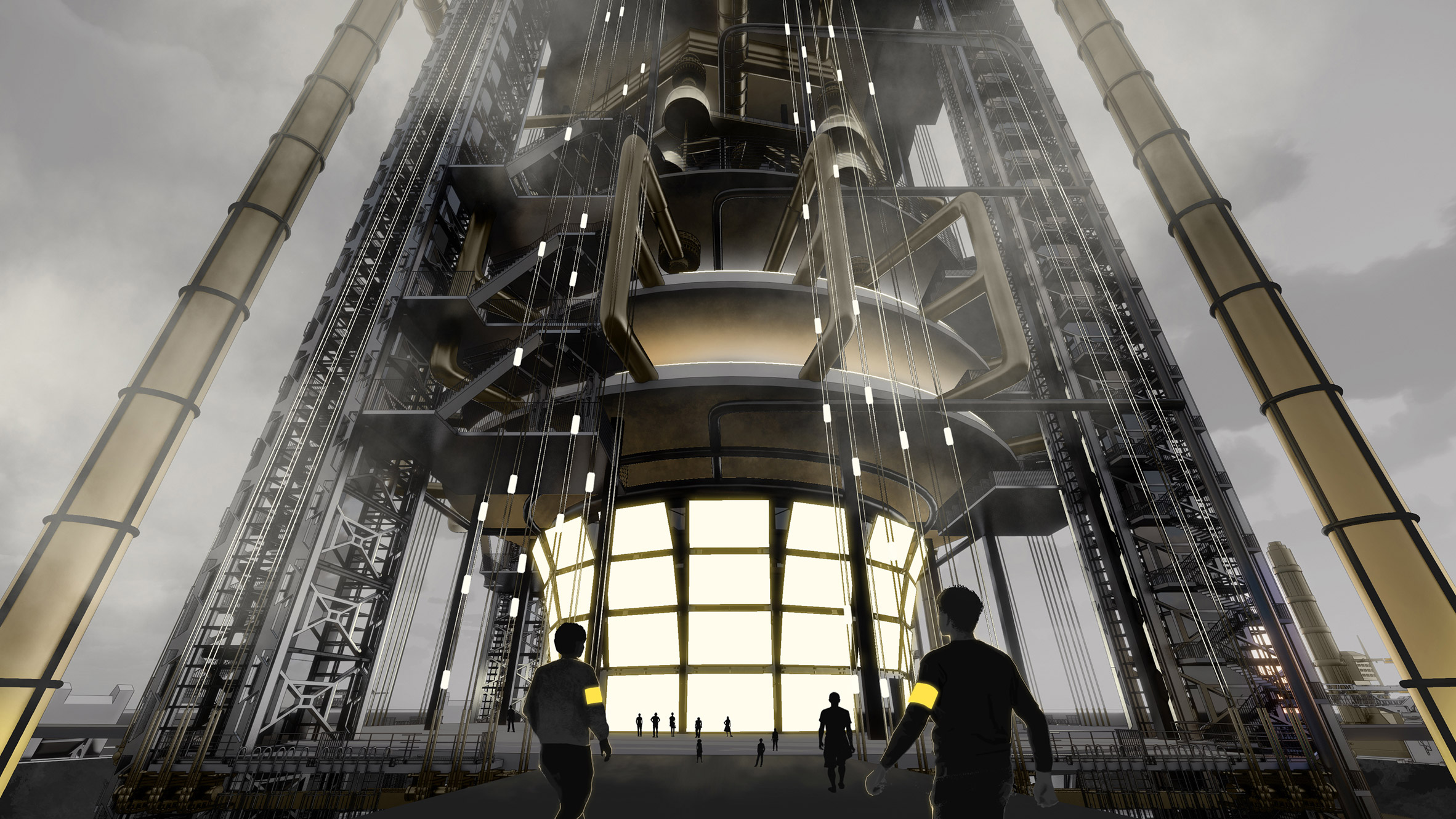 “The project tackles the issue of the emerging ‘Useless Class’ in China. The Useless Class, coined by Yuval Harrari, are low-skilled factory laborers that are being replaced by robots and AI. The project proposes a new way of spatial and social design approaches that helps the ‘Useless class’ to embark on a new beginning in life.

“Instead of monetary gains, the residents accumulate social credit through participating in game-like e-waste recycling quests which gradually help them to rebuild their sense of purpose and fosters community bonding.” 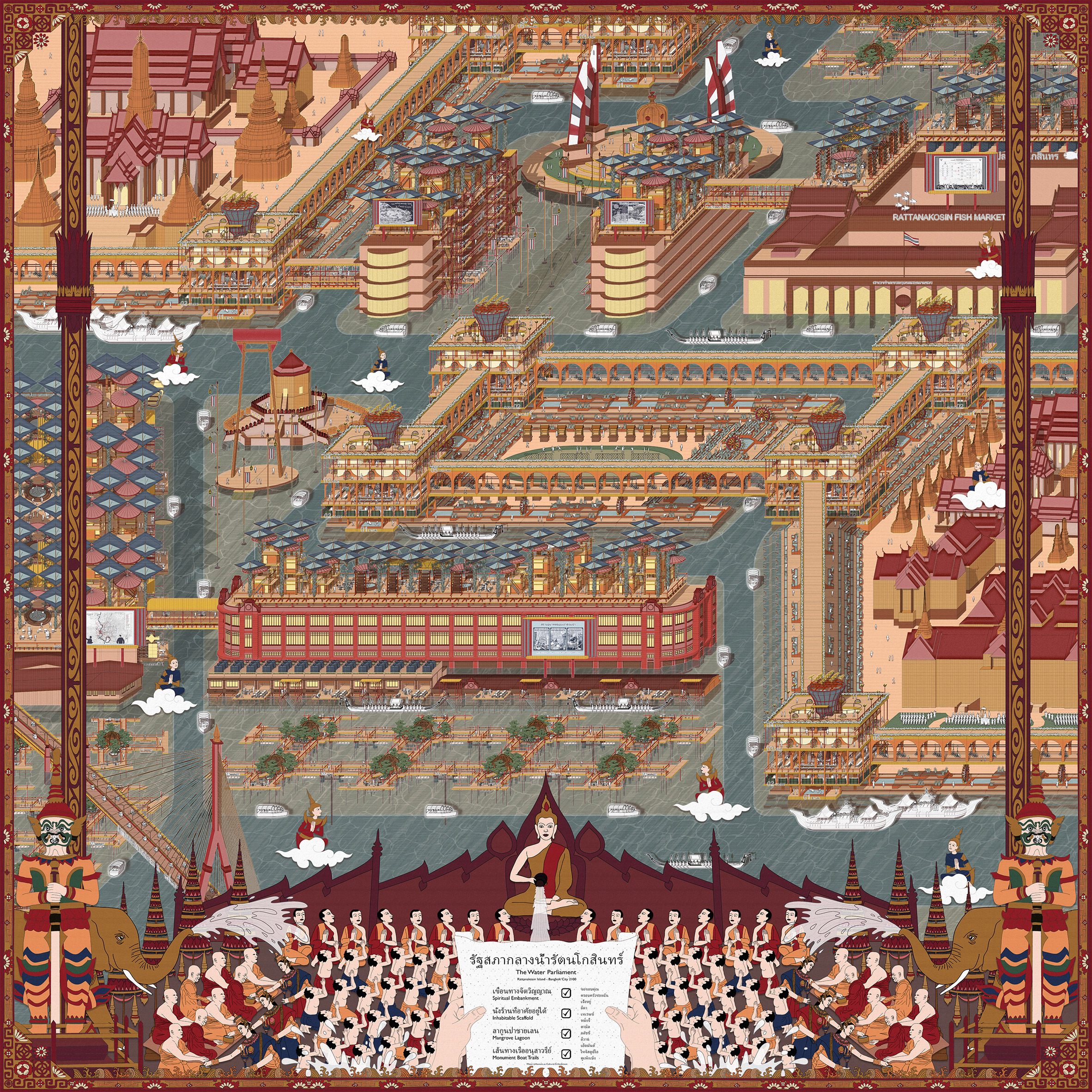 “The thesis is built around a fictional realm of the inhabitable landscape of Bangkok city in the year 2100 where a new Water Parliament is situated at the ancient Rattanakosin Island that pertained to the commons of water and subjected to the groups of people living on the island that represents the culture and people of the Thai city.

“It celebrates a different aspect of water and engages the traditional water culture with more advanced technology and infrastructures. It demonstrates that the environmental crisis of sea-level rise is potentially a new opportunity for them to reshape the city through participation.” 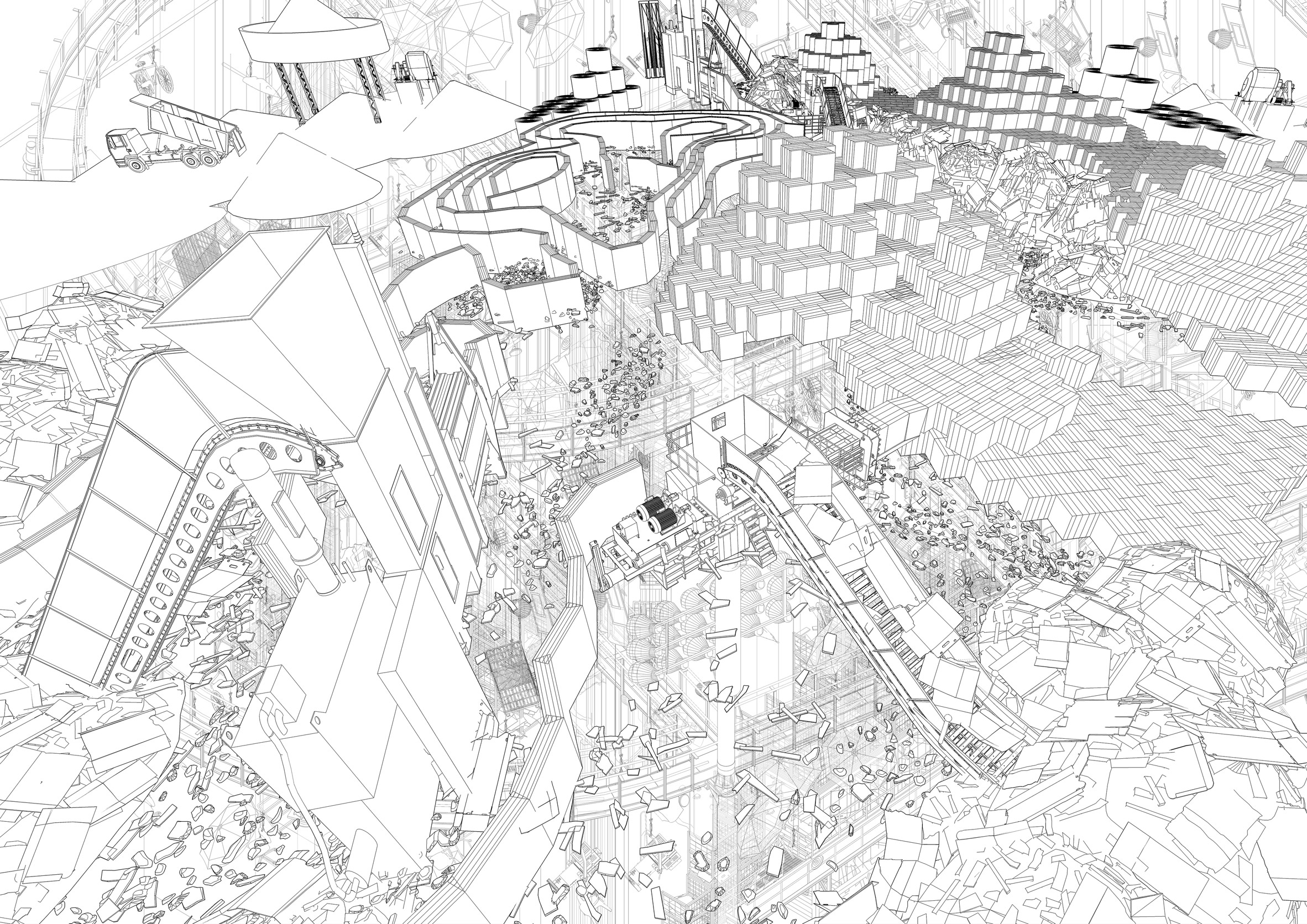 “This thesis originated from an investigation of assemblages in informal cardboard collecting – culminating in a study of how material assemblages gradually reconstituted themselves across different scales. Expressed architecturally as a recycling centre, the thesis seeks new emancipatory findings and possibilities for man, architecture and informal recycling through object-oriented perspectives.

“Specifically, studying how these objects exist, aggregate and affect the body across different scales yields new understandings and approaches to architecture as a mediator between body and object. It suggests a direction to look at architecture from the material itself first, rather than asking first how it serves us.”

This school show is a partnership between Dezeen and the National University of Singapore. Find out more about Dezeen partnership content here.