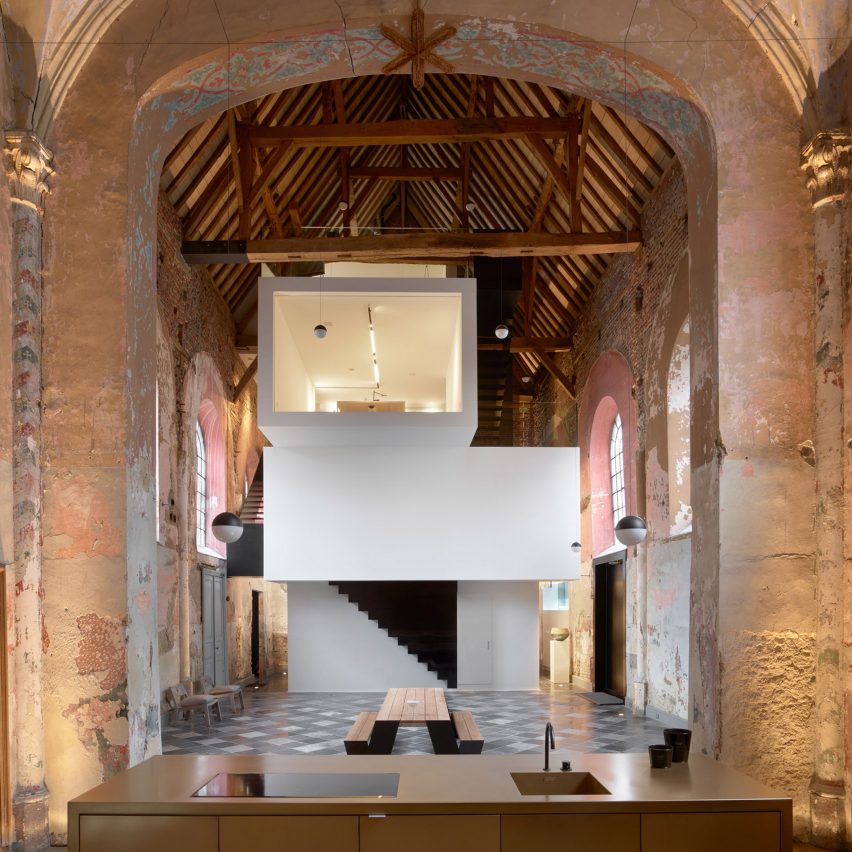 From a forest cabin to a converted chapel, our latest lookbook features ten workspaces from the Dezeen archive that were created by architects and designers for their own use.

Highlights include Benjamin Hubert‘s design for his studio Layer, the Lisbon practice of Portuguese architects Aires Mateus and a colourful couple’s office for the duo behind interiors firm 2LG Studio.

Architecture practice Aires Mateus restored four storeys of an 18th-century building in Lisbon to create its studio, retaining and restoring many original features including the decorative plasterwork and elaborate ceiling murals.

The converted office contains two model-making areas as well as several work- and meeting spaces. These include the grand Noble Room, where simple wooden chairs and a pared-back workbench made from pale timber contrast with the otherwise elaborate interior.

Ya Vsesvit, Ukraine, by Yakusha Design

Black brick partitions divide up the monochromatic studio of Ukrainian designer Victoriya Yakusha to create a number of smaller offices, the grandest of which is centred on a chunky desk crafted from a single block of sandstone.

Most of the furnishings and ornaments in the interior were made by Yakusha’s furniture brand Faina, allowing it to double up as a showroom.

Find out more about Ya Vsesvit ›

Office in the Woods, Spain, by SelgasCano

Set in a woodland near Madrid, the office of Spanish architecture studio SelgasCano (top and above) is semi-sunken into the forest floor, with a transparent north-facing wall providing views of the tree canopy above.

Parallel banks of wall-mounted desks are lined up on the other side of the tunnel-like space, where they are shielded from the direct sun.

Find out more about Office in the Woods ›

Venetian practice AMAA inserted a steel-framed two-storey glass volume into an abandoned plumbing factory in Italy to house its own office, which accommodates not just workspaces but also a small library.

A sunken level that was once used for pump testing now houses a wood-fronted staff kitchen that can be accessed via a poured concrete staircase, designed to be in keeping with the building’s industrial material palette.

Find out more about AMAA › 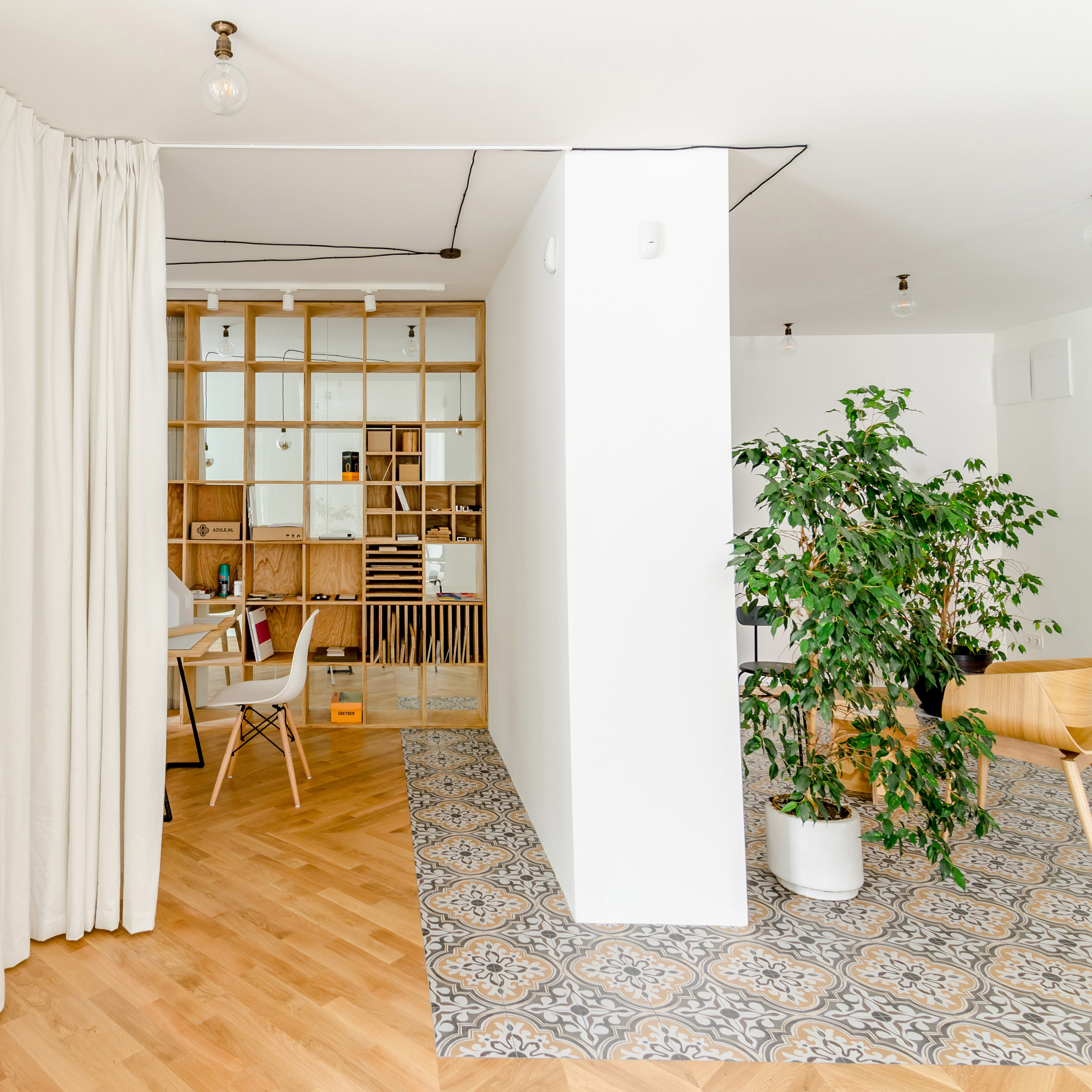 Another Studio, Bulgaria, by Andrey Andreev and Petya Nikolova

In a bid to encourage teamwork, Another Studio removed all of the non-bearing walls in its office in Sofia and replaced them with customised plywood shelving, which maintains sightlines throughout the office while providing crucial storage.

Translucent white cotton curtains can be used to further divide up the space, while removable boxes integrated into the storage system provide additional seating and side tables when required.

Find out more about Another Studio ›

The Waterdog, Belgium, by Klaarchitectuur

Klaarchitectuur left the original walls of this heritage-listed chapel in Limburg largely untouched when converting the space into a studio, choosing instead to insert a number of crisp white boxes into the interior.

Find out more about The Waterdog ›

Sauerbruch Hutton renovated a former Prussian military uniform factory in Berlin and added a third floor to its roof to accommodate the practice’s office alongside a studio for conceptual artist Karin Sander.

Roof lights allow sunshine to filter into the new top floor, which accommodates a reception and conference room, as well as a gallery leading to a library and a series of smaller offices and meeting rooms.

Married design duo Russell Whitehead and Jordan Cluroe of London’s 2LG Studio managed to integrate a shared workspace into their four-bedroom home by knocking down the walls around their kitchen.

The resulting open-plan office area is centred by a pill-shaped jesmonite table that the studio made in collaboration with artist Olivia Aspinall, surrounded by velvet chairs from Danish furniture brand Menu.

Find out more about 2LG Studio › 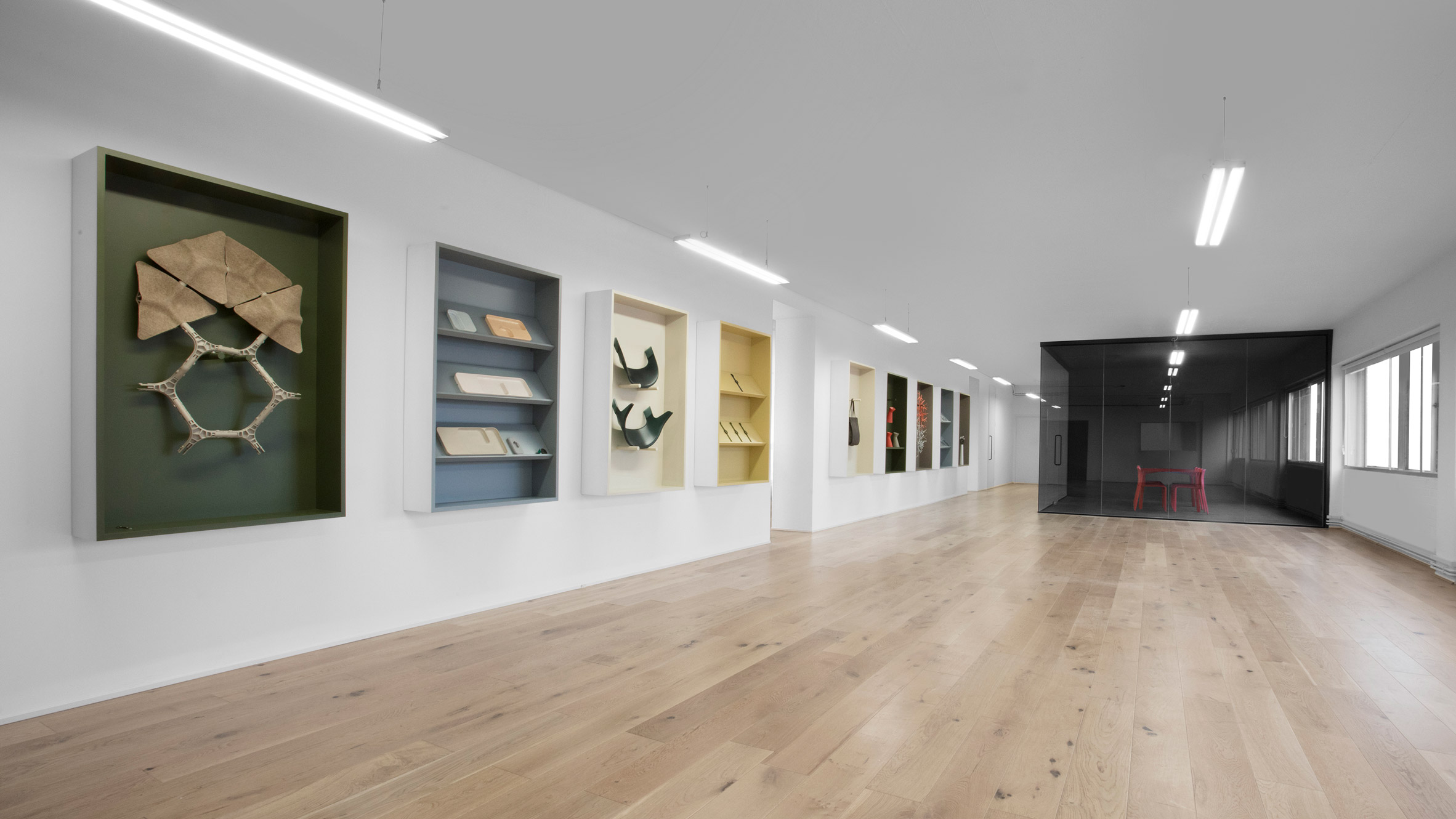 The converted warehouse that is home to London design studio Layer functions not just as a workspace but also as a gallery, with recent product designs, samples and prototypes on show in colourful display boxes to serve as inspiration for the team.

All rooms are open-plan save for a translucent black plexiglass cube that functions as a private conference room and is centred on a bright red Ripple table, designed by the studio’s founder Benjamin Hubert for Canadian manufacturer Corelam.

Find out more about Layer studio ›

Nestled into a tree-covered slope behind his house in Adelaide, Australian architect Max Prichard has built a six-metre-tall cylindrical cabin to house his own mini-studio.

The structure is clad in sheets of locally sourced hoop pine, while dark hardwood batons laid across the walls and floors mirror the radiating roof beams and line up with the wall of built-in storage.

The post Ten self-designed studios by architects and designers appeared first on Dezeen.