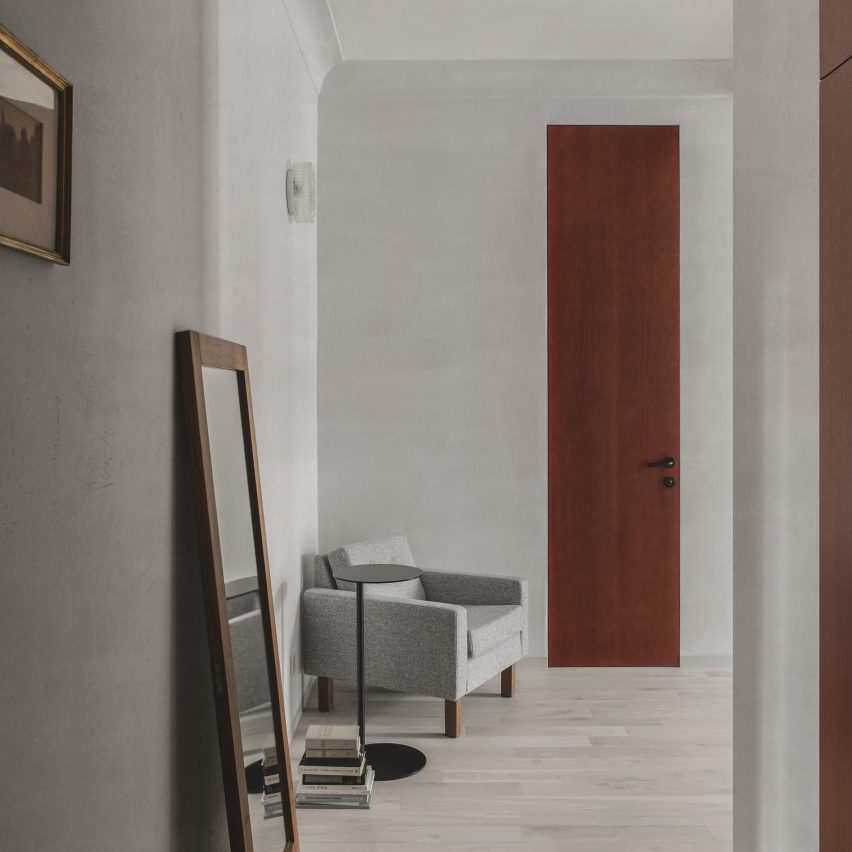 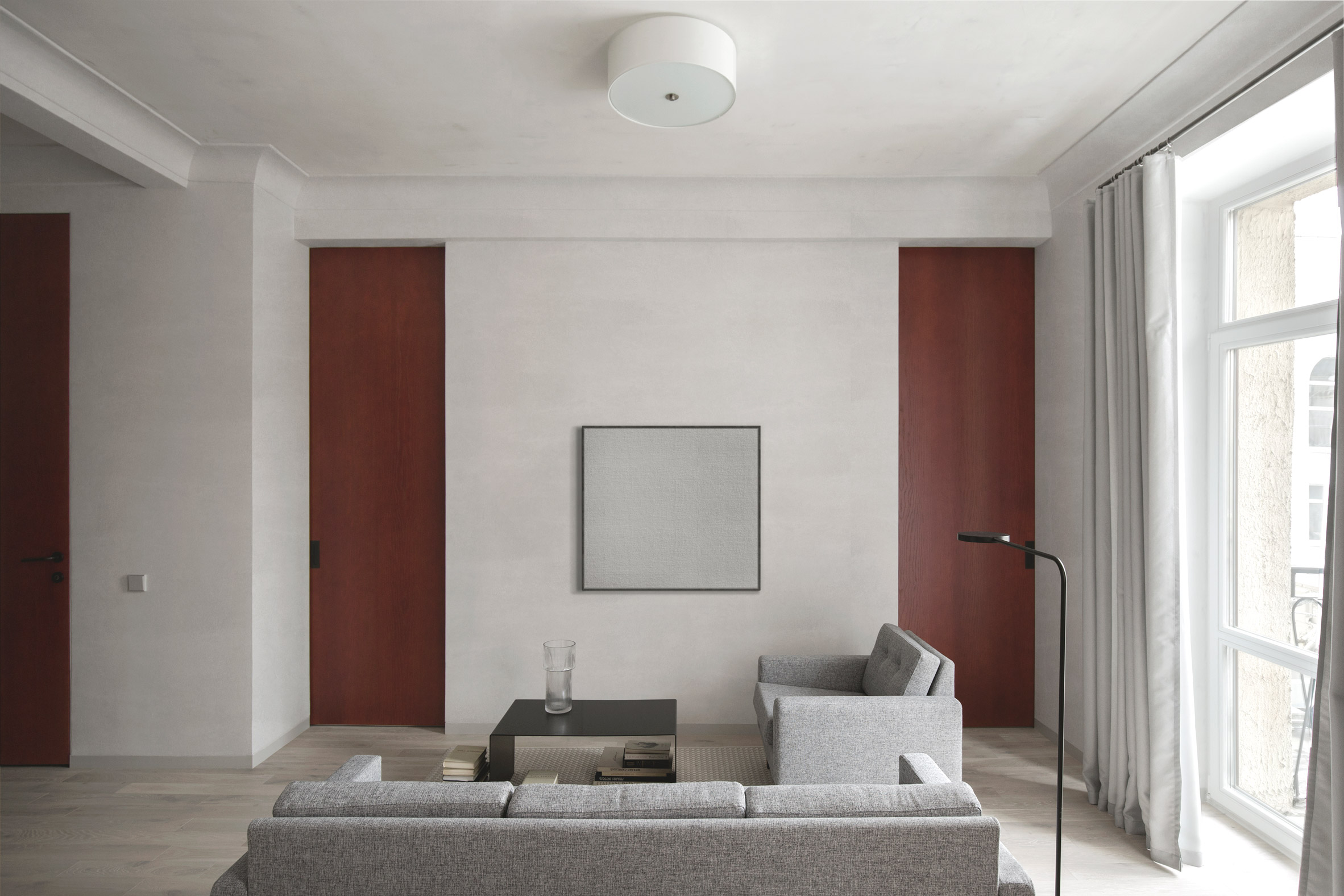 Thirdwave Architects opted for restrained colour and material palette in their overhaul of Apartment in Minsk, which is set within a 1950s residential block.

“We always aim to ‘set materials free’ so that they could demonstrate their original nature and engage with one another,” the studio told Dezeen. 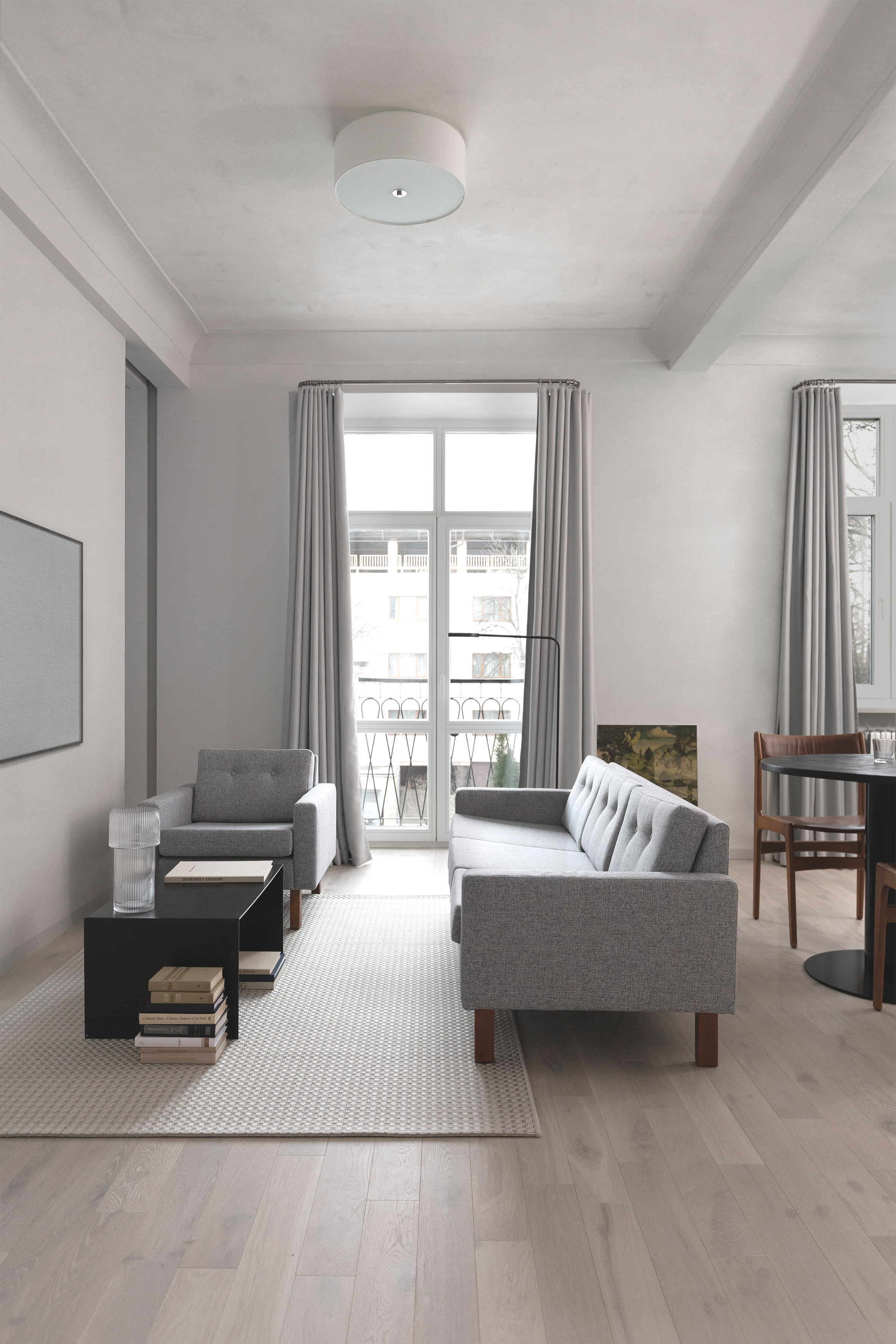 The apartment’s owner had initially approached Thirdwave Architects to make the interiors more accommodating so that the home could be rented out to tourists visiting the city.

It had previously featured a dark and “cellular” layout where rooms were only accessible via a single corridor.

The floor plan now comprises a single open-plan living space – one half plays host to the sitting room, while the other has the kitchen. A double bedroom is set off to one side. 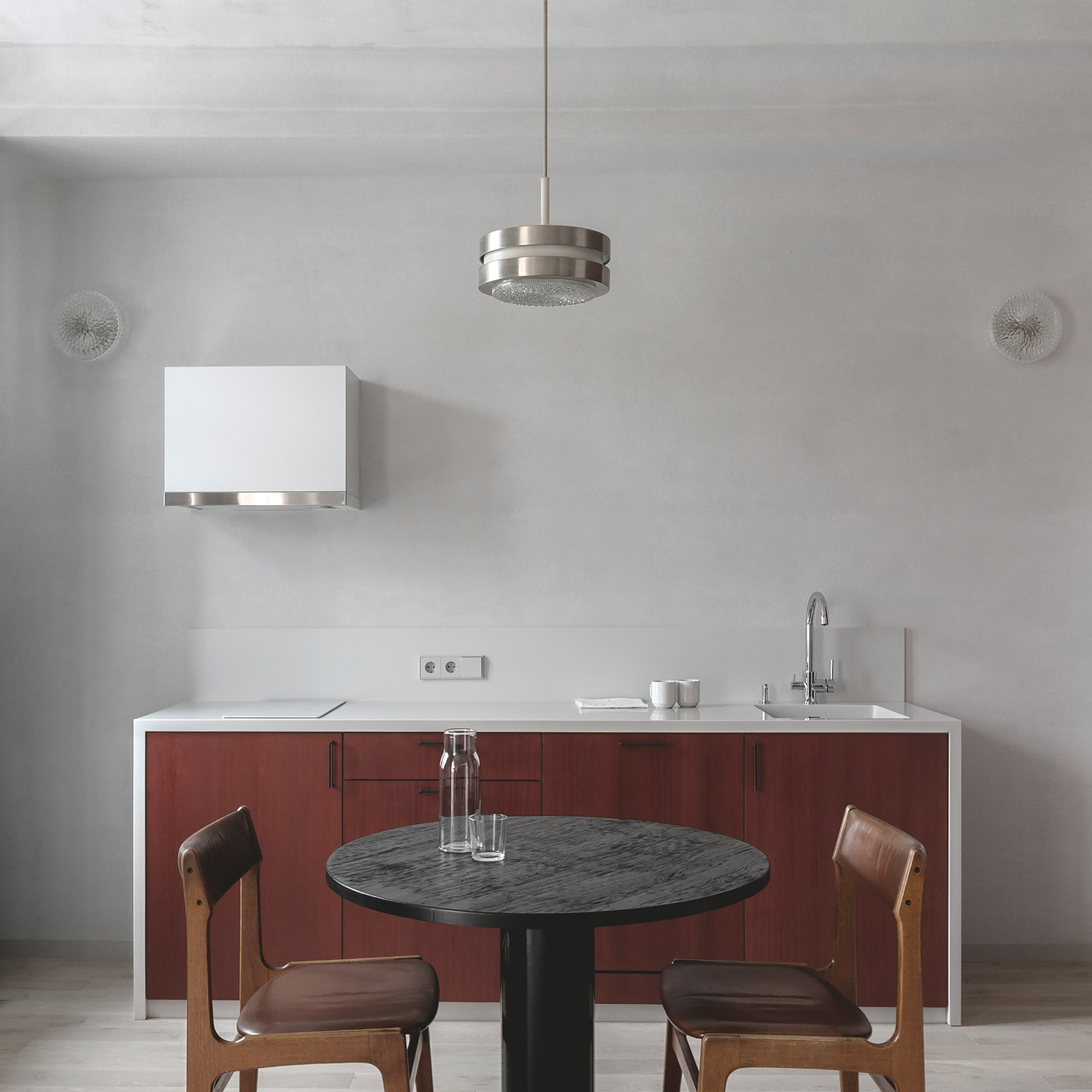 Walls are covered with ash-coloured plaster, complemented by pale grey soft furnishings and sheer curtains that are hung in front of the street-facing windows.

Wood veneer with an oxblood-red stain features on kitchen cabinetry and two sliding doors that slide across to give additional privacy to the bedroom. The wood was also used to create the wardrobes and headboard in this room. 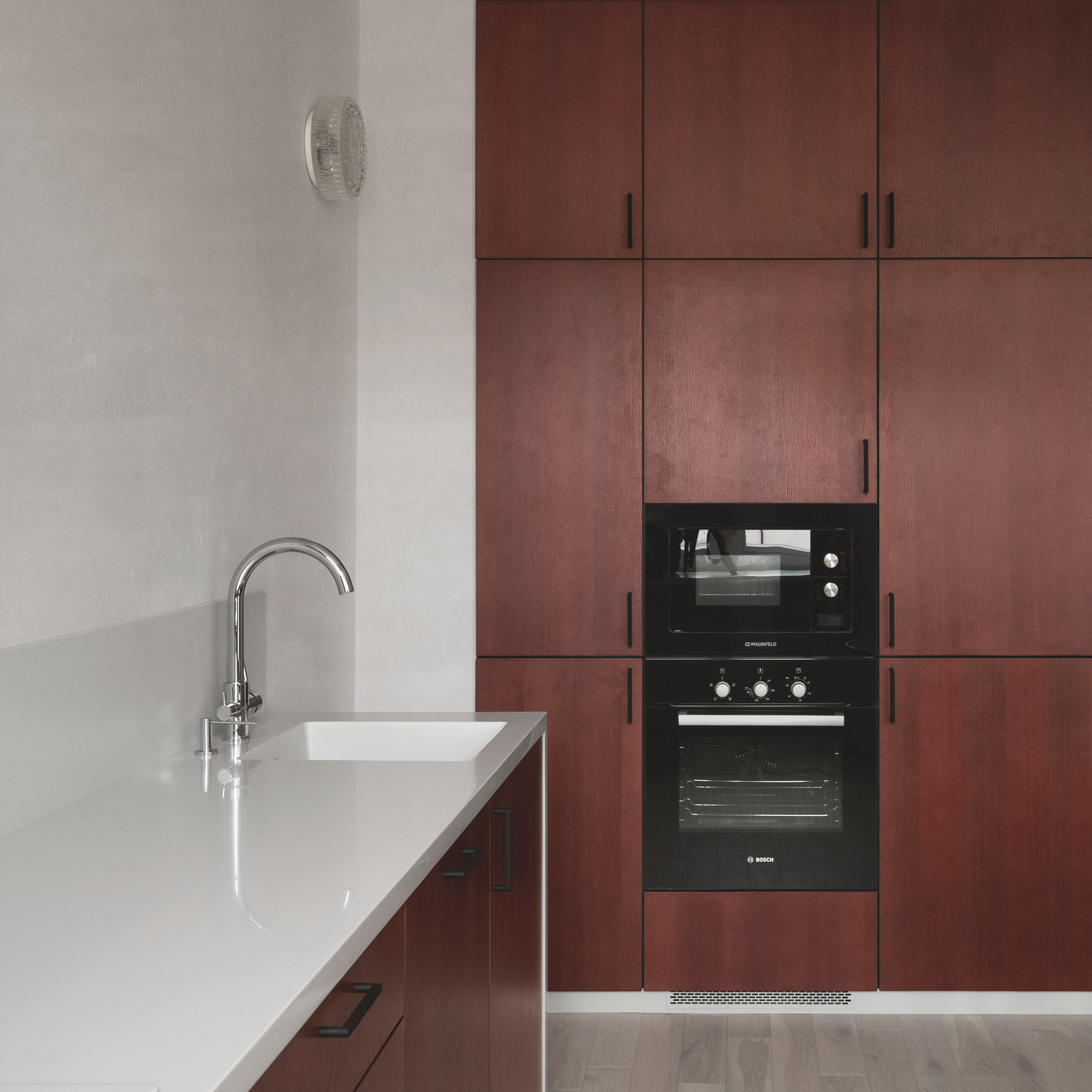 There are a few touches of metal, in the steel tap faucets and a pendant lamp that is suspended above the dining table.

Two artworks, which the studio feels represent the dichotomy of the apartment’s colour scheme, help to dress the space. One is a grey-hued abstract piece, and the other is a fragment of a rich-toned Baroque portrait mounted in a gold frame. 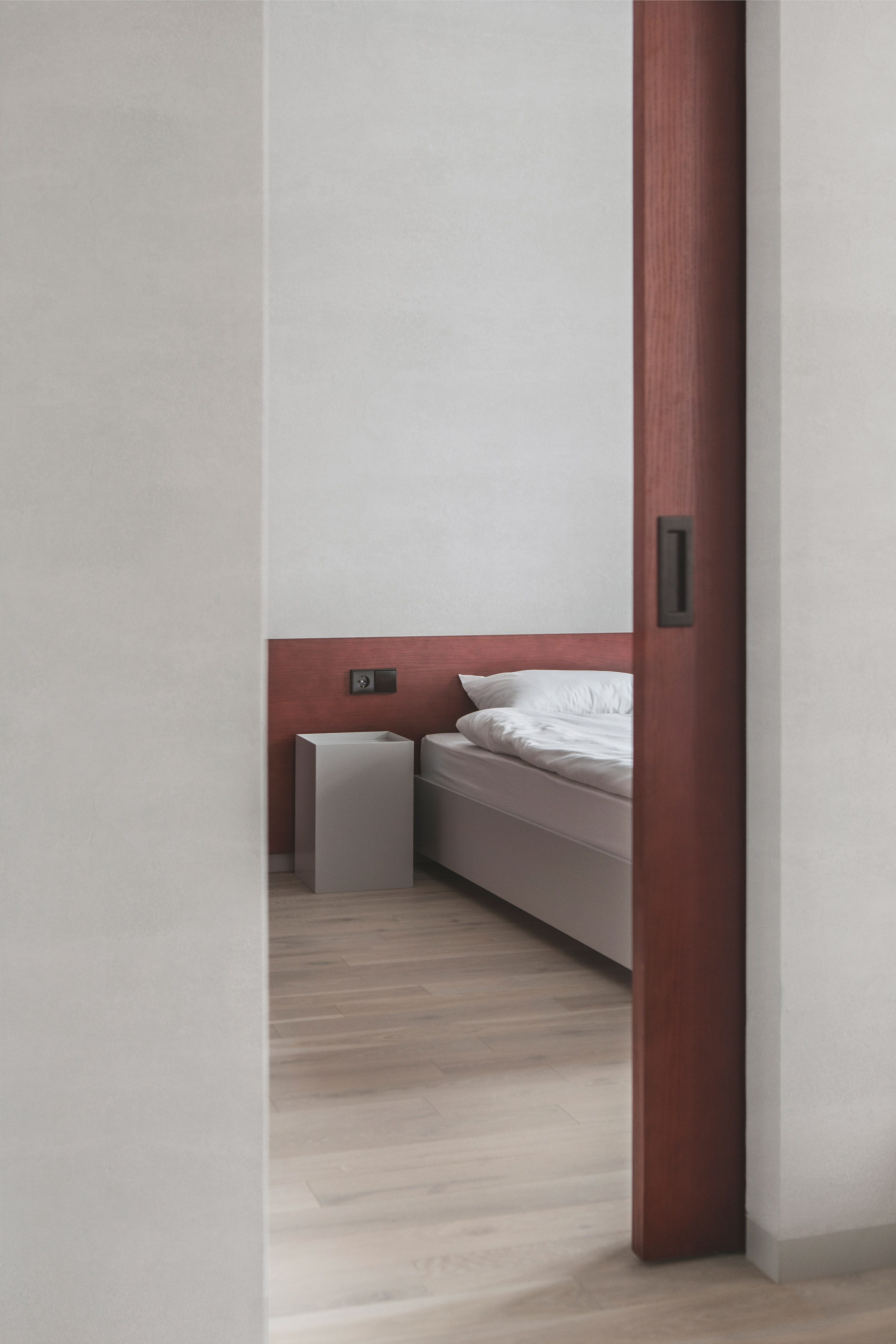 The bathroom set in the corner of the apartment, along with a partition wall with integrated storage cupboards, help delineate an entryway.

“The coherence of vertical elements forms a clear orthogonal system of space,” the studio added. 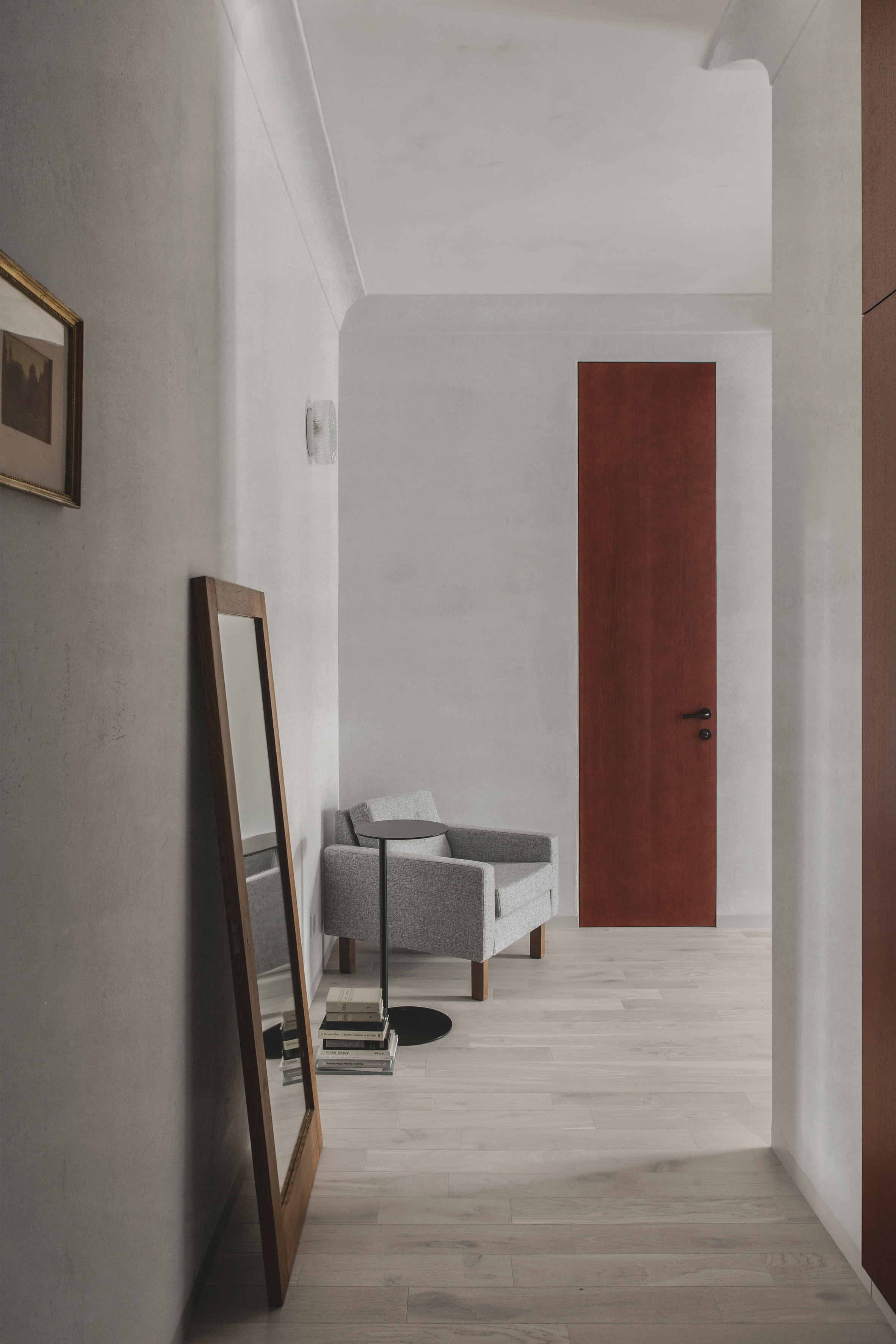 Thirdwave Architects is headed up by Alexandr Zhmakin, Galina Mikhailova and Lizaveta Shylichava.

It isn’t the only studio to have used coloured cabinetry to add character to a space – Club Marginal Architekten integrated floor-to-ceiling sage-green storage units to a flat in Berlin, while Fala Atelier added peacock-blue cupboards to a Porto apartment’s kitchen.

Photography is by Alexandra Kononchenko.