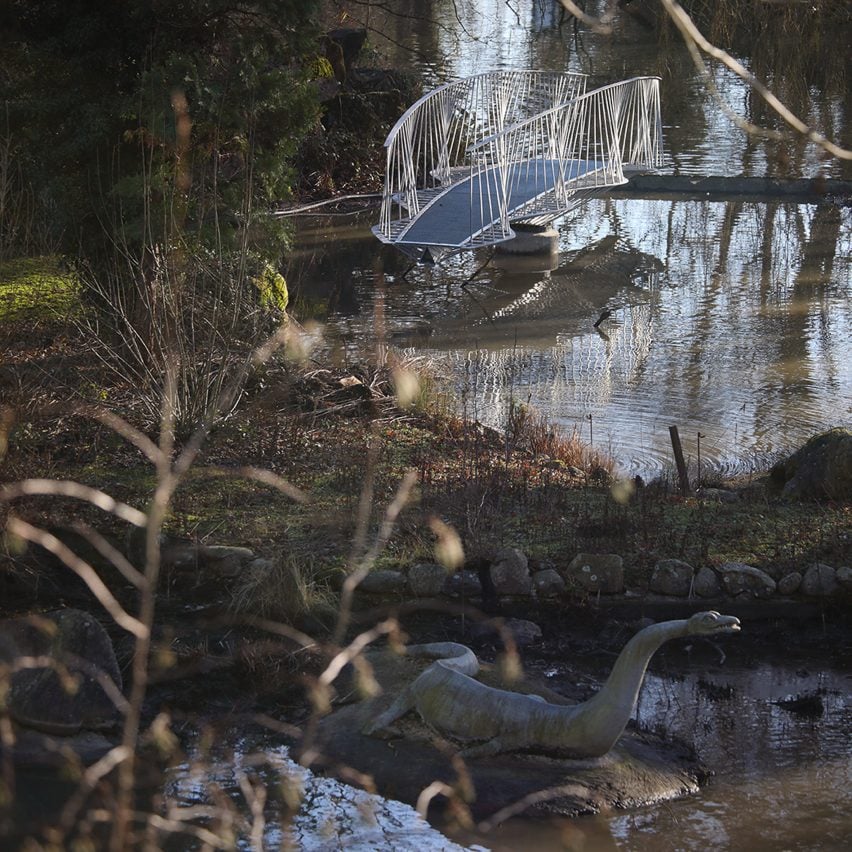 Built to replace a structure that was removed in 2017, Tonkin Liu‘s swing bridge provides access to a group of 167-year-old concrete dinosaurs on an island in Crystal Palace Park.

Believed to be the first dinosaur sculptures in the world, the concrete structures were built at the same time as the Crystal Palace structure that held the Great Exhibition was moved from Hyde Park to south London.

The pivoting bridge was designed by Tonkin Liu, with structural engineering by Arup, and built by local fabricator Cake Industries for charity Friends of Crystal Palace Park Dinosaurs, which maintains the sculptures.

It will only be swung to connect the banks when needed for staff to maintain the dinosaurs or lead educational trips to the island.

When not in use the bridge, which is supported on a single central column, was designed to be a sculptural object set within the lake.

“It provides a floating sculpture when the bridge is not in use and negates the need for a bulky lockable gate,” he told Dezeen.

“This is a 21st-century structural artwork that has grown out of the unique circumstances and the spirit of the 19th-century dinosaur sculptures.”

Supported by the central support column, the bridge’s main structure is a central beam with a triangular cross-section.

The undulating form and structure of the bridge’s deck were derived from geometric shapes found in nature to provide the bridge with strength and stability.

“For many years now we have been immersed in the study of geometry,” said Tonkin. “A number of inspirations synthesised: the skeletal structure and the undulating movement of the bony fish that propels it forward,” he continued.

“The undulation’s push-pull force is reflected in our undulating balustrades, enabling it to act as struts and ties, in the most optimal way.”

To save money and reduce the amount of material used for the bridge’s deck, supporting struts and balustrade supports were all made from 10-millimetre thick plates of steel that were laser-cut using a skeletal comb structural technique.

On each side of the main beam, a steel plate the length of the bridge was cut with multiple incisions to create a shape that resembles a comb with multiple teeth.

These teeth were cut to different lengths to create the deck, support the balustrade and form struts connecting to the lower edge of the central beam.

Every third tooth was left in place to become the deck, with the remaining lengths of steel either folded up to support the handrail or down to be attached to the main beam.

Tonkin Liu is a London-based architecture studio run by Mike Tonkin and Anna Liu. The studio previous converted a barn in Yorkshire into a house with a double-height library, created a solar installation in Hull, and designed a prototype stent that adapts to a patient’s throat for use after tracheal transplant surgery.