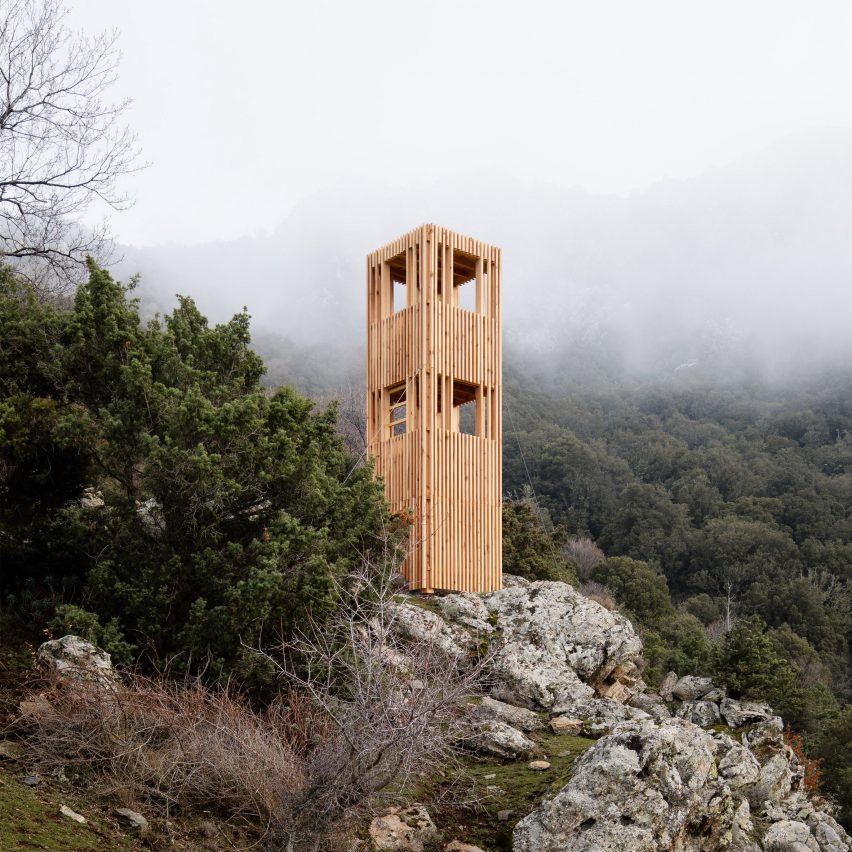 Orma Architettura has built three matching wooden viewpoints in the mountains of the Mediterranean island Corsica, for people to observe native red deer from.

Named Corsican Deer Observatories, the structures are located within the Regional Natural Park of Corsica, a wildlife protection zone that covers nearly 40 percent of the island.

The viewpoints, designed by Orma Architettura, form part of the park authorities’ plan to raise awareness of the red deer, which were recently reintroduced to Corsica.

“The population of Corsican red deer, an endemic species that disappeared in 1969, is now in the process of increasing thanks to a reintroduction program led by the Natural Regional Park in 1985,” explained architect Jean Mathieu De Lipowski.

“This very successful program is now entering a second phase, aimed at raising people’s awareness regarding the fragility of the species, with the help of the observatories.”

The three Corsican Deer Observatories are elevated on outcrops within St Pierre de Venaco, Castifao and Quenza, three communes where the deer can be commonly sighted.

Built by local artisans, the viewpoints all have matching rectilinear forms that resemble tree trunks, but are adapted to suit their specific locations.

They are elevated on top of the rocks and made from evenly placed slats of wood, designed to provide panoramic views of the landscape without the occupants being seen by the deers.

“We thought of the use of the observatories, and wanted to create a space where people can see everything,” added De Lipowski.

“Thanks to the spaces the slats of wood have created, people can do this without deterring the deers on the outside.”

The viewpoints in St Pierre de Venaco and Quenza occupy a single storey, and are accessed by externally placed ladders that blend into their facades.

Their bases are unevenly finished, where the slats extend down to slot precisely over the rockface, and echo the appearance of undergrowth.

Meanwhile, Castifao’s observatory sits on a mountainside, and occupies two storeys joined by an internal ladder, designed to optimise views further away.

Other wooden observation decks on Dezeen include architect Lars J Berge’s accessible hide for bird watchers at the tip of Askøy, a low-lying island off Norway’s west coast, and a lakeside pavilion by OOPEAA that doubles as a giant periscope.