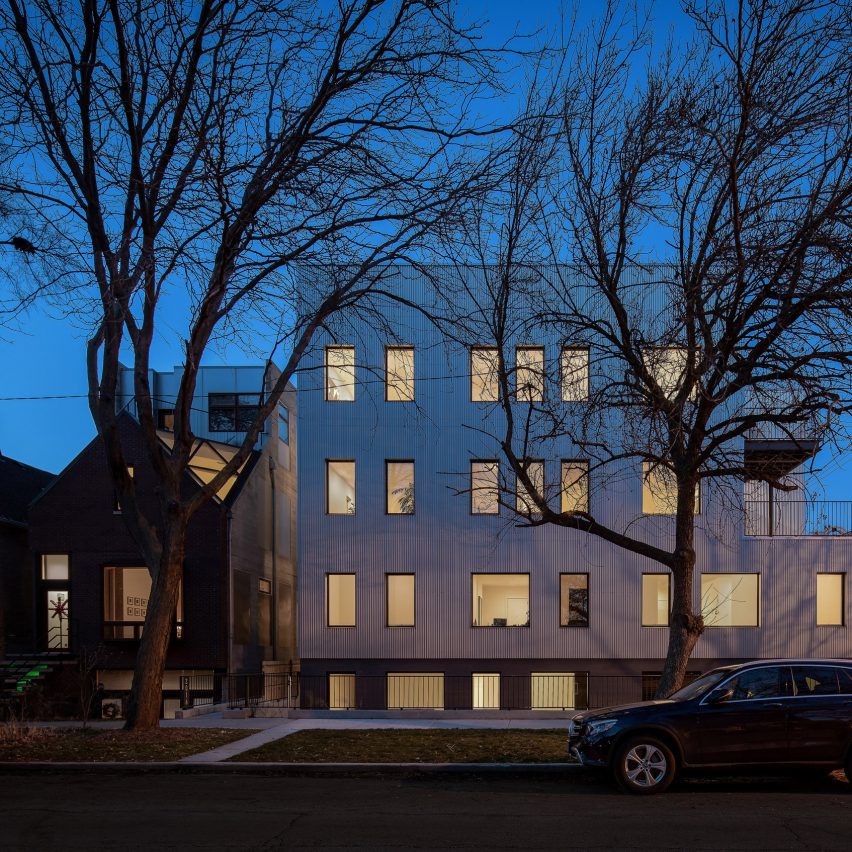 Vladimir Radutny Architects has created an apartment block at 2016 W Rice in Chicago that is clad in corrugated steel cladding broken by terraces.

Containing eight apartments, the studio designed the block was to maximise the buildable area while creating homes that had natural light and outdoor spaces.

“Tasked with maximising the buildable area, the question was how do we make all of the individual units desirable, regardless of orientation,” explained Vladimir Radutny Architects founder Vladimir Radutny.

“Natural daylight, connection to the outside, outdoor spaces and ability to simply open a window for cross ventilation is how we provided that answer,” he told Dezeen.

Four duplexes, each with a terrace on the ground floor, were placed on the lower two floors of the block. Above this, the upper two storeys are each divided to create four further apartments.

Vladimir Radutny Architects created two voids on the upper floors that contain terraces and balconies for the second and third-floor apartments and contain fire escape stairs.

“The outward appearance of this project is a direct result of the strategic interior planning, with two large cubic voids defining large terraces on the second floor,” said Radutny.

“In these voids, the articulated steel balconies and stairs are nested, echoing Chicago’s infamous fire escapes and adding visual relief at the south-east and north-west corners of the site.”

Each of the duplexes contains a living area and a master bedroom suite on the lower floor and two additional bedrooms above, while the single-floor apartments each have two bedrooms.

Along with the outdoor spaces, all of the apartments have large windows that are punched through the block’s corrugated metal cladding, which gives the building a uniform exterior appearance.

“Wrapped in one contiguous metal skin we desired for the building to be more performative,” said Radutny.

“The exterior reflective cladding produces a play of light and shadow across the facades, highlighting atmospheric changes brought forth by the seasons and throughout the day,” he continued.

Overall Radutny hopes that the building can demonstrate what can be achieved on a small urban site.

“2016 Rice attempts to mark its place in time, demonstrating a progressive stance and spatial opportunities contemporary architecture can offer for both its inhabitants and the neighbourhood that it resides within,” he said.

“We are optimistic that projects of similar qualities and approach will elevate the bar for future small scale developments, promoting higher design standards for all residential work within our city’s fabric.”

Radutny established his Chicago-based studio in 2008. Previous projects include the renovation of an apartment in the iconic 860-880 Lake Shore Drive complex by Ludwig Mies van der Rohe and the overhaul of an industrial loft apartment in Chicago.

Photography is by JC Buck and Mike Schwartz.