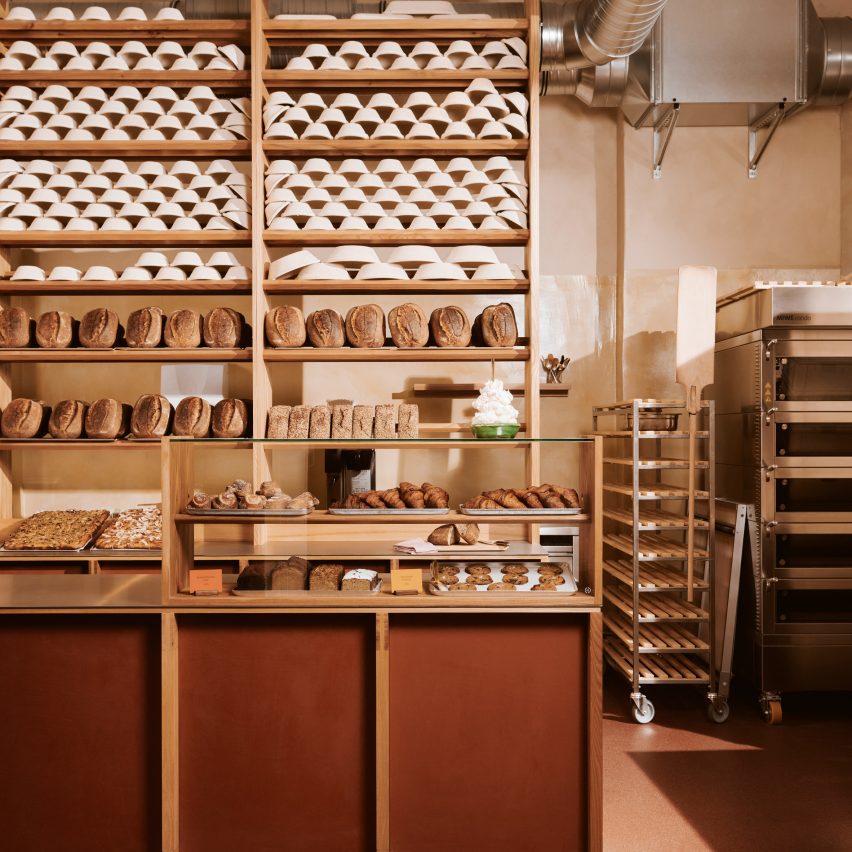 The layout of this craft bakery in Berlin, designed by Danish architects Mathias Mentze and Alexander Vedel Ottenstein, revolves around an open kitchen that showcases the beauty of the bread-making process.

Located in the courtyard of a restored brick factory in the city’s Scheunenviertel quarter, Sofi is a craft bakery that makes bread and cakes using grains sourced from small, organic farmers in Northern Europe.

The project is a collaboration between Danish chef and restaurateur Frederik Bille Brahe and Design Hotels founder Claus Sendlinger.

As well as making baked goods using organic ingredients and low-intervention techniques, the owners’ ambition is for Sofi to serve as a community hub and to supply fresh bread to a selection of local restaurants.

Its interior was designed by Mentze and Vedel Ottenstein in collaboration with Augsburg-based interior design studio Dreimeta.

“We were introduced to the project last summer when Frederik Bille Brahe approached us about a new bakery he was working on in Berlin,” Vedel Ottenstein told Dezeen.

“Like Frederik, we are based in Copenhagen and have frequented his existing cafes and restaurants. So he brought us on to ensure that there would be a distinct Copenhagen feel to his first endeavour outside of Denmark.”

“When we first visited the site in July 2020, the former tenant — which was a famous bagel shop — had just vacated the space. From the beginning, it was quite easy to imagine that this could be an amazing project, as the space itself has a lot of nice qualities,” he recalled.

“The double-height ceiling as well as the connection to the inner courtyard bring both light and a certain curiosity to the location. The space needed a lot of work but we felt the assignment was more to bring forth existing qualities instead of inventing new ones.”

The new floor plan revolves around an open-plan kitchen that sits at the centre of the space. Conceived as a “production floor”, this allows guests to watch Sofi’s small, international team of young bakers rolling out dough and working the ovens.

“Making bread is a highly technical skillset with all these different steps and we wanted this process to be the generator of the plan layout,” said Vedel Ottenstein.

“A bakery has a very clear narrative in which the oven is the heart of the place and so we wanted to place the oven in the exact middle of the space,” he continued.

“It’s like a choreography and we wanted to showcase the beauty of the process to all of the customers – from mixing the flour and water all the way to stocking up the bread shelf with freshly baked goods.”

A red vinyl floor and walls painted in a delicate yellow hue are intended to reflect the colours of the bricks in the courtyard outside.

Peg coat racks and shelves wrap the walls while a 3.5-metre-tall bread shelf and long communal table fill up the centre of the space.

All are made from solid elm with walnut detailing, with larger pieces such as the counter, bread rack, work table and shelves fabricated by a German carpentry firm. Smaller, movable items including the stools and benches were crafted by Rammelisten, a small woodwork studio based just north of Copenhagen.

“This was so that we could be more hands-on, follow the production and do alterations to the designs if we discovered issues,” explained Vedel Ottenstein.

The huge wicker pendant lamp that hangs over the communal table was handmade by French studio Atelier Vime and has been decorated with a flower display by local artist Danh Vo.

“The flower arrangement installed inside the shade is made from bast and hops flowers as a nod to the leftover waste from beer production that Frederik intends to use in the bread-making at Sofi,” explained Vedel Ottenstein.

“The installation is a seasonal piece, where Danh Vo will bring in new flowers and plants according to the season from his farm north of Berlin, called Güldenhof,” he continued.

“He wishes to challenge the typical idea of a flower arrangement by using unexpected plants and weeds such as flowering leeks and lettuces.”

A tall, open shelving unit separating the bakery and guest area displays a range of the team’s favourite products — including ceramics, coffee, tea, natural wines and flour from the Danish Kørnby mill.

Sofi is not the first warm-hued bakery to feature on Dezeen. Design studio I IN decorated this tiny bakery in Japan in the colours of bread, while US studio The New Design Project outfitted a West Village cookie shop with speckled terrazzo, beige tiles and creamy walls to reference the baked goods for sale.