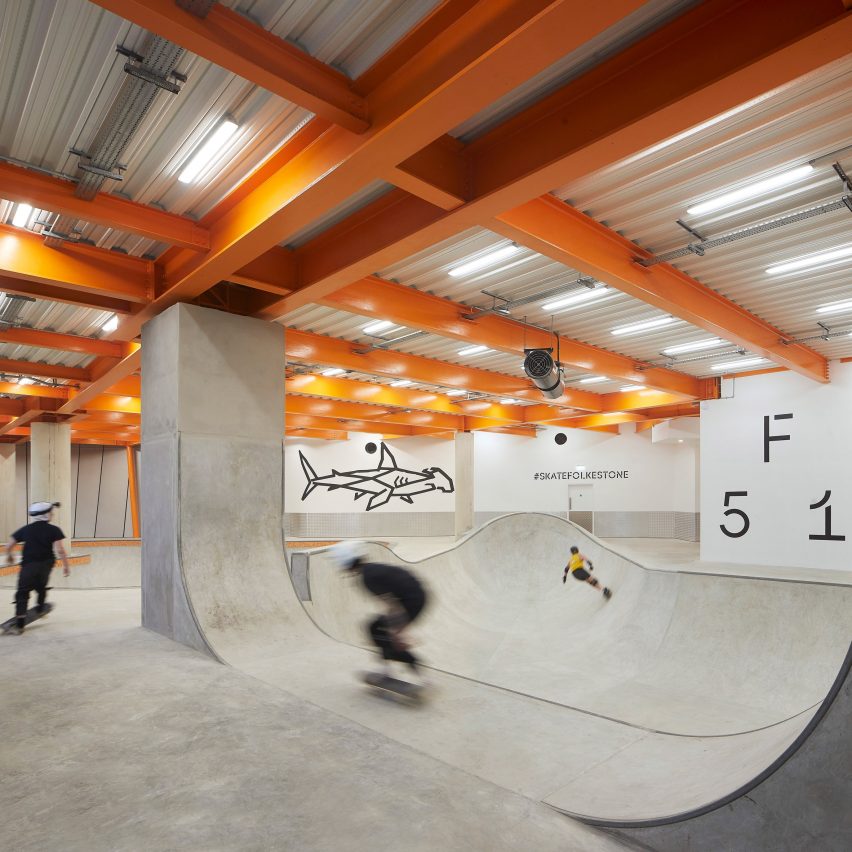 Three skateparks are stacked on top of each other in F51, a major new attraction in Kent, England, designed by Hollaway Studio.

The building, which claims to be the first multi-storey skatepark in the world, is located in the seaside town of Folkestone in Kent.

Despite being raised off the ground, its three skate floors provide state-of-the-art facilities for skateboarders and BMX riders, including huge concrete bowls and multi-level landscapes.

The building also contains a 15-metre-high climbing wall, a boxing ring and a ground-floor cafe.

“F51 is all about young people, it’s about regenerating a town for the next generation,” said architect Guy Hollaway, founder of Hollaway Studio.

“Ordinarily you wouldn’t expect a skatepark to be in the town centre,” he added.

“Normally it would be out of town and it wouldn’t be part of the community, whereas this is really encouraging young people to come and to say to them ‘you’re the most important customer in town because you are the future’.”

Featuring a facade of crushed metal mesh, the building tapers outwards as it gets higher to create as much room as possible inside.

Large curves of concrete protrude out from underneath the metal, revealing the underside of the skating bowls within.

“It looks smaller than it is, because it has very few windows and this curving edge that means you never see the end of the building,” said Hollaway.

The first floor is known as the Bowl Floor. It contains a swimming-pool-style bowl with a depth of 2.65 metres and a shallower bowl that includes skateable pillars and 1.8-metre quarter pipes.

The second floor, called the Street Floor, is designed to resemble a typical city landscape, with slopes, stairs, handrails and ledges. Created with beginners in mind, it has a plywood surface.

The Flow Floor, located on the third storey, is also shaped in plywood. Here, the floorscape incorporates corner bowls, waterfalls, a volcano and various other features. 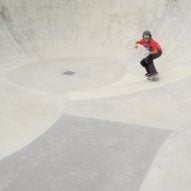 To ensure these floors would be both exciting and accessible to both experienced skater and beginners, Hollaway enlisted skate specialists Maverick Skateparks and Cambian Action to carry out the design and build.

Engineers Ramboll also played a key role, making sure the building was robust enough to support both these heavy elements and the force of those using them.

The climbing facility runs up alongside all three of these levels. As well as the 15-metre high wall, which includes two dedicated speed climbing runs, it also includes a bouldering area.

The Olympic-sized boxing ring is located on the ground floor beside the cafe, which is decorated with skateboard deck art.

More art can be found throughout the building; there are 12 murals, all created by locally-based artists.

F51 was commissioned by millionaire Roger De Haan, who has been investing in projects all over Folkestone.

In recent years the town has aimed to develop its arts and culture offering, with venues such as the Creative Quarter and the Quarterhouse art centre opening and the Folkestone Triennial art festival taking place.

This site was originally planned to be a car park. But skateboarding came into the equation when De Haan realised he needed to replace an existing skatepark located by the harbour, where he and architects ACME are building a housing development.

“He thought the cars were really boring, so then this idea of a multi-storey skatepark was born,” said Hollaway.

Hollaway believes F51 will have a significant impact on young people, due to a management programme that aims to make the facility as accessible and supportive as possible.

A partnership with nearby schools creates dedicated access for local children at a reduced rate of £1 per month.

“It’s a real step-change in the thought process,” Holloway said.

“What would happen normally is that a town would, with the best intentions, build a skatepark on a site out of town. But it’s not managed so it becomes a place where people sell drugs, so then skating gets a bad reputation.”

“We think this building can change the way people think about skating,” he said.

Other Hollaway Studio projects in Kent include Rocksalt, a restaurant in Folkestone harbour, and the renovation of Margate fairground Dreamland.

The studio is currently working with bicycle manufacturer Brompton on a new headquarters in Ashford.