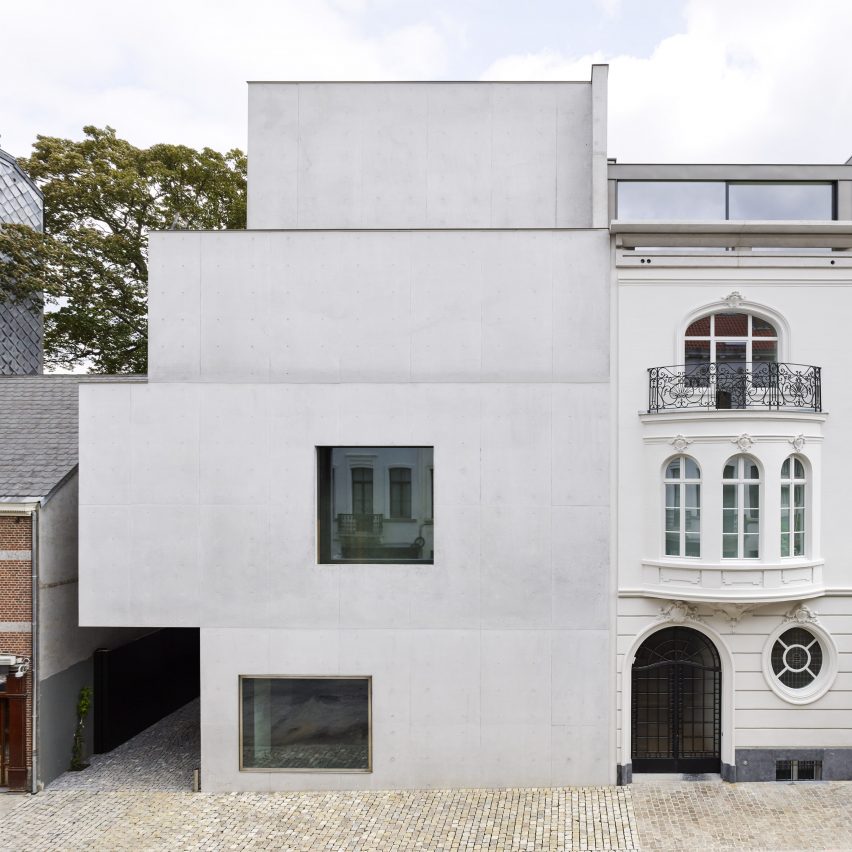 Belgian studio Robbrecht en Daem has completed an expansion of the flagship Xavier Hufkens gallery in Brussels, tripling the amount of exhibition space.

Robbrecht en Daem designed a contemporary concrete extension to adjoin the 19th-century townhouse on Rue St-Georges, which has housed the Xavier Hufkens gallery since 1992.

The design is deliberately minimal, offering a clear counterpoint to the more decorative facade of the townhouse.

The architecture takes the form of four stacked boxes, interrupted only by a pair of windows: one square and the other rectangular. These boxes line up with existing facade details, creating a subtle relationship between old and new.

A similar relationship plays out inside. The more intimate rooms of the “maison de maître” now link with a series of modern, spacious white-cube galleries that will allow the gallery to host larger artworks and more ambitious exhibitions.

“Every aspect of our new gallery stems from the vision to create an exceptional platform for our community of artists, many of whom made their start with us here in Brussels,” said gallery founder Xavier Hufkens.

“In the 35 years since we opened our first gallery in a warehouse in the city centre, Brussels has flourished into a vibrant epicenter of contemporary art in Europe and internationally. This is a cultural heritage and creative community to which we are proud to belong and deeply committed.”

Xavier Hufkens has two other gallery locations in Brussels, in the 1970s Galerie Rivoli and on Rue Van Eyck. However, Rue St-Georges was its first permanent location in the Belgian capital.

Over the years, this space has hosted shows by Antony Gormley, Felix Gonzalez-Torres, Louise Bourgeois, Roni Horn and Richard Artschwager – many of whom were unknown in Belgium before.

This extension marks the third time Robbrecht en Daem has worked on this building, having designed the original fitout in 1992 and annexed an adjacent building in 1997.

“For the new St-Georges building, we were given the rare opportunity to reinterpret and quite literally expand our own architecture,” said studio co-founder Paul Robbrecht. 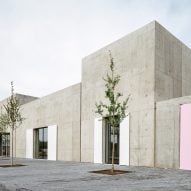 “In the early 1990s, we repurposed the existing maison de maître into a lively art gallery,” he continued.

“Now, 30 years later, we opted for an architecture that epitomises the site’s history and extends into a new adjoining building, an impressive concrete structure with a cascade-like form.”

The extension contains six storeys, with two of these located below ground. Galleries occupy four of the six levels, adding over 800 square metres of exhibition space to the gallery.

“Variations on light and proportion give each floor a distinct character, which will compel both artists and visitors,” said Robbrecht.

“Transcending the traditional white cube, the new St-Georges gallery aims to be a destination that unites the old with the new, the intimate with the monumental.”

Xavier Hufkens reopened on 2 June with an exhibition of works by American artists and sculptor Christopher Wool, curated by Anne Pontégnie. It becomes the first comprehensive exhibition of Wool’s work in Europe.

“We hope that this new space will serve as a dynamic home for our gallery and our artists well into the future,” added Hufkens.

Other recent gallery launches include David Chipperfield’s extension to Kunsthaus Zurich and a renovation of Donald Judd’s Marfa in Texas.