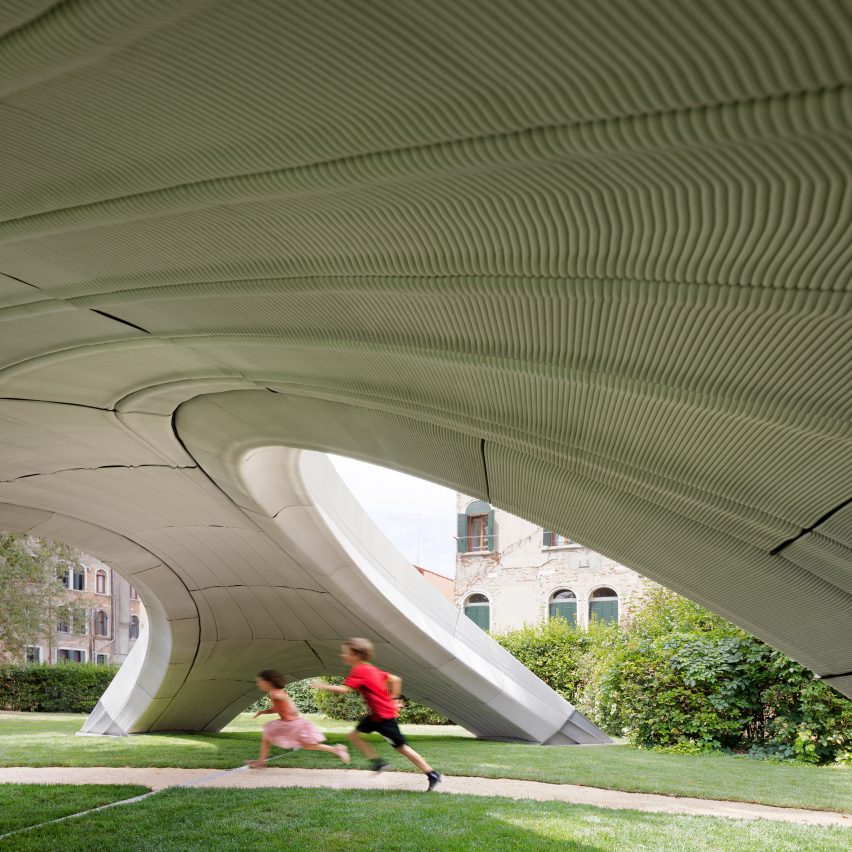 Zaha Hadid Architects has built a 3D-printed concrete footbridge named Striatus at the Venice Architecture Biennale that is freestanding and assembled without mortar.

Named Striatus, the 16-metre-long bridge was built by the computation and design team at Zaha Hadid Architects, known as ZHACODE, in collaboration with the Block Research Group (BRG) at Swiss university ETH Zurich. It was constructed from 53 hollow blocks each printed from 500 layers of printed concrete.

The structure is an unreinforced arched bridge that uses compression and gravity to hold its form. The studios arranged the 3D-printed wedge-shaped elements, known as voussoirs, to form arches and vaults.

The bridge has a double-curved deck with swooping stepped entry points placed at either end of the bridge, leading up the structure from its footings.

“The intention was to meet the challenges facing the architecture, engineering and construction industry by demonstrating a responsible way to design with one of its most widely-used and enduring materials – concrete,” ZHACODE co-founder Shajay Bhooshan and BRG co-director Philippe Block told Dezeen.

“To do so, we draw from and computationally enhance one of its most ancient wisdoms – masonry construction.”

The studio looked to historic masonry vaulting to inform its design, placing the printed pieces in a way that allows the load of the structure to be distributed its foundations without the need for internal ancillary support such as post-tension cables.

No glue or adhesives were used during the construction, instead, neoprene pads were placed between each of the printed blocks during assembly to control the levels of friction and stress concentration. External ties were added to the bridge to absorb the thrust tension.

“The discrete blocks of the funicular structure are held together only by gravity in compression, so, all blocks remain compressed together along with the individual print layers, using the same principles as Gothic cathedrals or structures like Armadillo Vault,” said Bhooshan and Block.

“Striatus could literally stand happily for centuries as historic masonry construction has done, because forces are transferred in a way that is very natural for concrete, through compression only, and with very low stresses, i.e. not demanding much from the material.”

Contrasting to typical 3D-printing methods, which use horizontally layered extrusion techniques, the bridge used a single six-axis robotic arm to print non-uniform and non-parallel layers across its 53 blocks.

The 53 blocks took 84 hours each to print while its construction, including foundation casting, assembly and stair and deck installation, took 35 days.

By creating hollow 3D-printed blocks, the structure aims to reduce typical material use and consumption. While its voussoir-style construction and lack of internal structural reinforcement means that the bridge to be easily disassembled and reused.

The bridge was installed at the Giardini della Marinaressa at the Venice Architecture Biennale as an opportunity to exhibit the capabilities of unreinforced concrete and computational design.

“We wanted to demonstrate that 3D-printed concrete elements can be used directly as structural components when designed as an unreinforced masonry system,” said Bhooshan and Block.

“Not only for a straightforward vertical, like a wall or moderately corbelling structure but for the more challenging structures that span space.”

Although the structure was produced using concrete, Bhooshan and Block explained that they hope materials such as low-embodied-carbon concrete or earthen concrete can be developed for such printing techniques.

“These materials and manufacturing improvements are being actively developed and point to positive prospects of improving on the benefits of 3D concrete printed masonry demonstrated in Striatus.”

Recently, a stainless steel 3D-printed bridge designed by Joris Laarman and built by Dutch robotics company MX3D was opened in Amsterdam six years after it was announced.

The bridge’s material use came under fire with architect Philip Oldfield calculating that the stainless steel used in the structure has an estimated 27.7 tonnes of embodied carbon.

Also in The Netherlands, construction company BAM Infra built what was claimed to be the world’s first 3D-printed concrete bridge in 2017.

Photography is by Naaro.