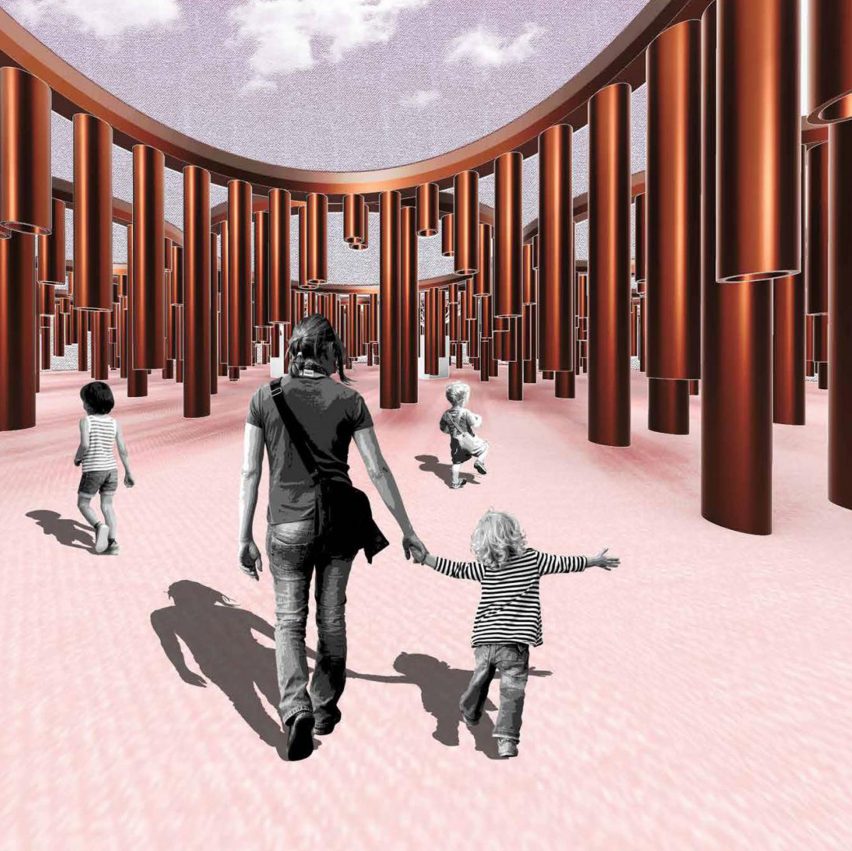 A self-funded art bank and a community building aiming to support local fishermen through Brexit are included in Dezeen’s latest school show by students at the University of the Creative Arts.

Also featured are a masonry school that aims to make use of stone as a low carbon material and a project that explores how brownfield land can be used to solve the housing crisis.

University for the Creative Arts

“From rebuilding devastated cities to servicing the needs of different social groups, design changes lives as well as landscapes. This year’s final year, students reading architecture at the University for the Creative Arts (UCA) have been encouraged to approach their design with an activist’s mindset.

“Their work considers the environmental, social, functional and economic impact of buildings and spaces and presents new concepts that could help to shape a better future. Their work is the culmination of years of rigorous learning, refining of skills and a drive to put forward innovative ideas that can make a real impact in the world.

“Discover the work of UCA’s graduating Architecture students on our website.” 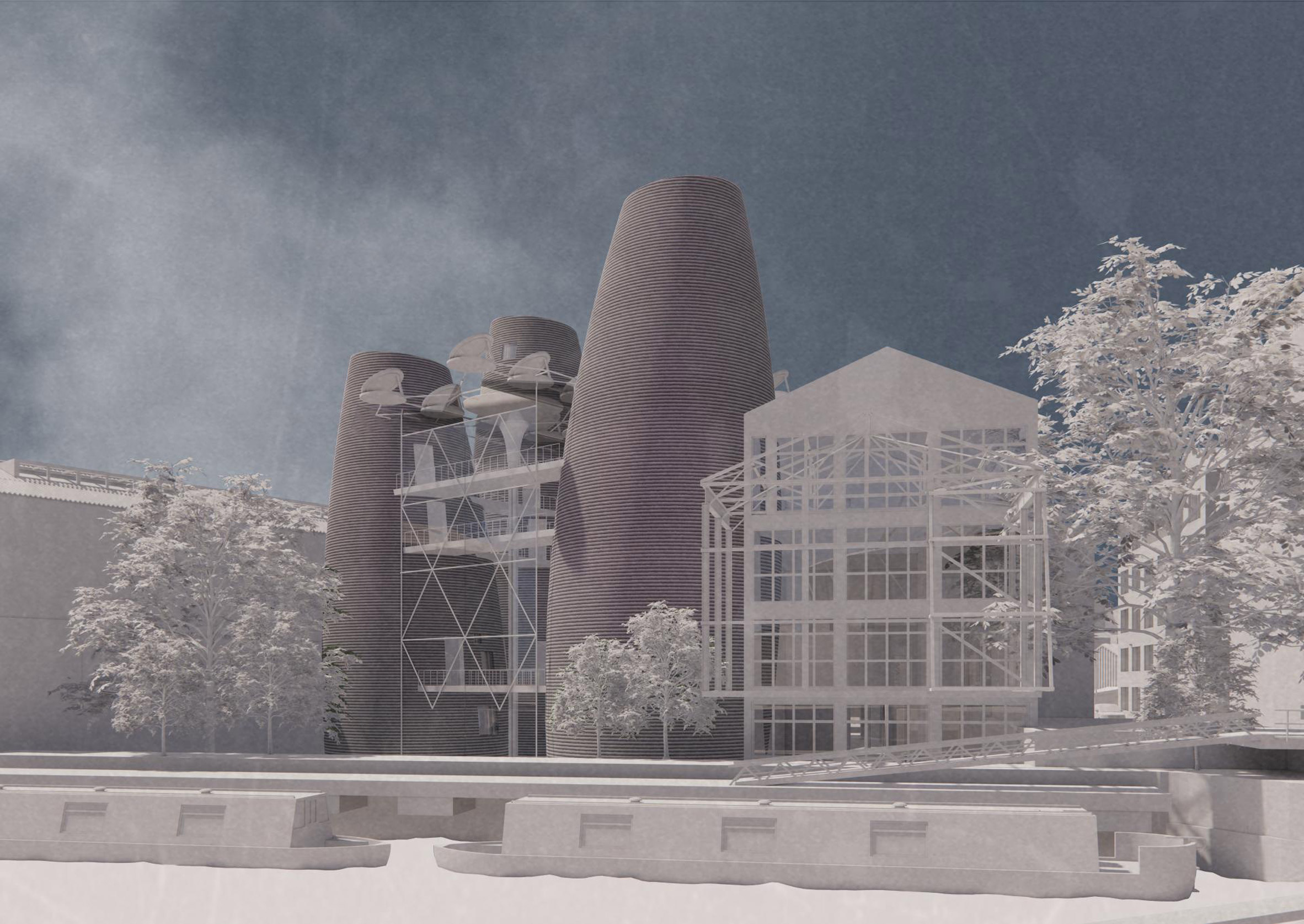 “In their final project, Bishop explores the Fish Island in east London. With the old industries of east London rapidly being replaced by a growing number of new tech corporations, Maisie’s proposal explores how AI, robotics and 3D printing can be applied in daily life to promote greater, more equal, and efficient health and wellness in the borough of Tower Hamlets.

“By exploring five pillars of life: health, shelter, fuel, transport and environment, their proposed institute is a hub for education, exploration and application.

“The design primarily focuses on five 3D printed research spaces, dedicated to exploring the potential AI, robotic and printing advancements in the above fields, organised around a central atrium. This public atrium provides opportunities to employ the technologies produced and for persons visiting to experience these advancements in real-time.” 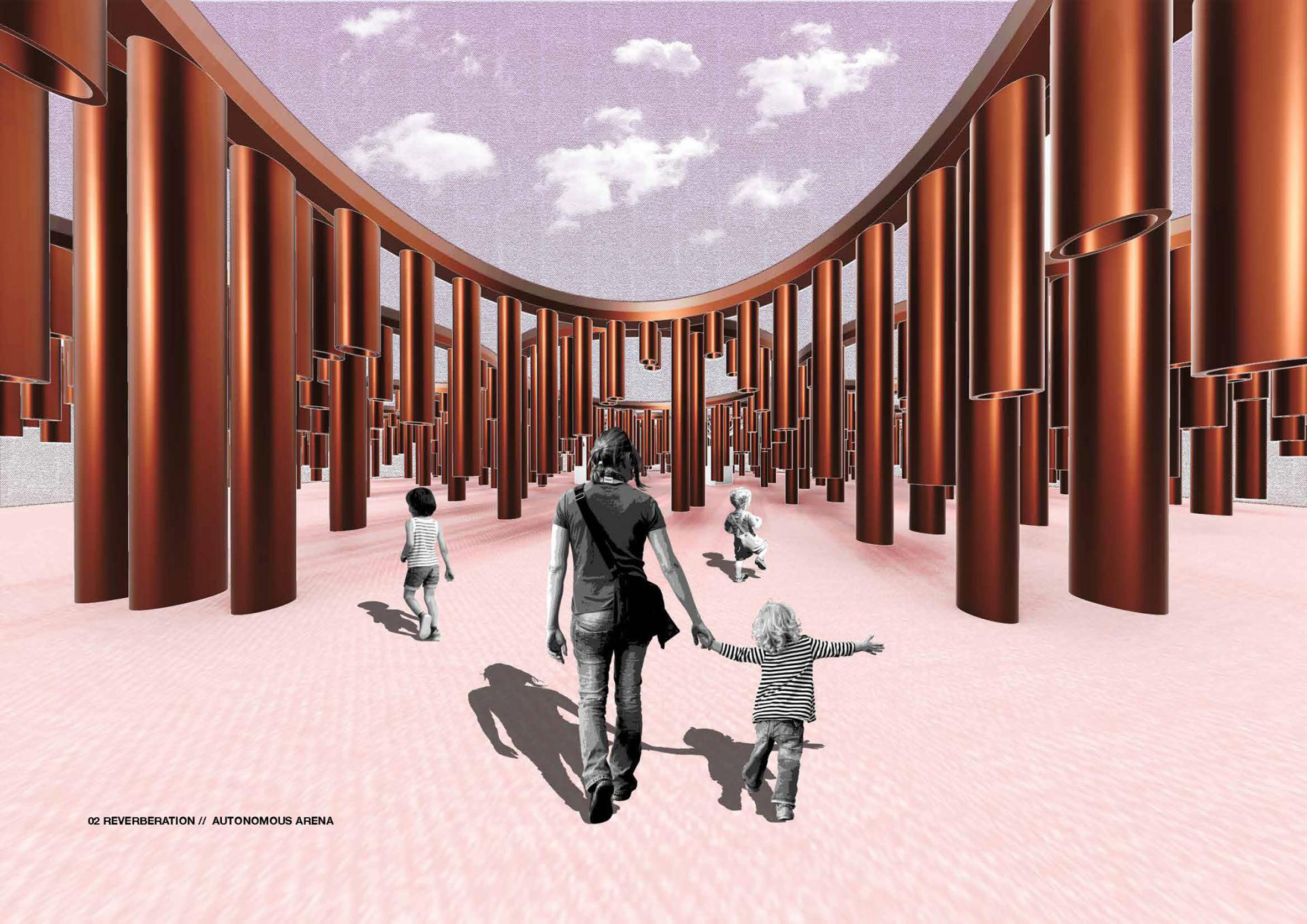 “White’s work is a manifesto for sonic urbanism at Manston airport. The vacant void of Manston airport has disconnected the surrounding communities from each other, acting as an inaccessible zone separating them.

“The project uses six central pavilions to carve out four radial territories around them. The pavilions use sound to bring people to the site and weave existing communities together.

“These acoustic gateways re-link and neutralise the existing acoustic arenas, preparing an entry into urbanism fuelled by sound. The pavilions also act as sonic adjudicators in the politics of sound and become a testbed for what should or should not be heard.

“This is passed over to the inhabitants to contemplate through the many interactive sounds, installations and future development that are housed on and around the site.” 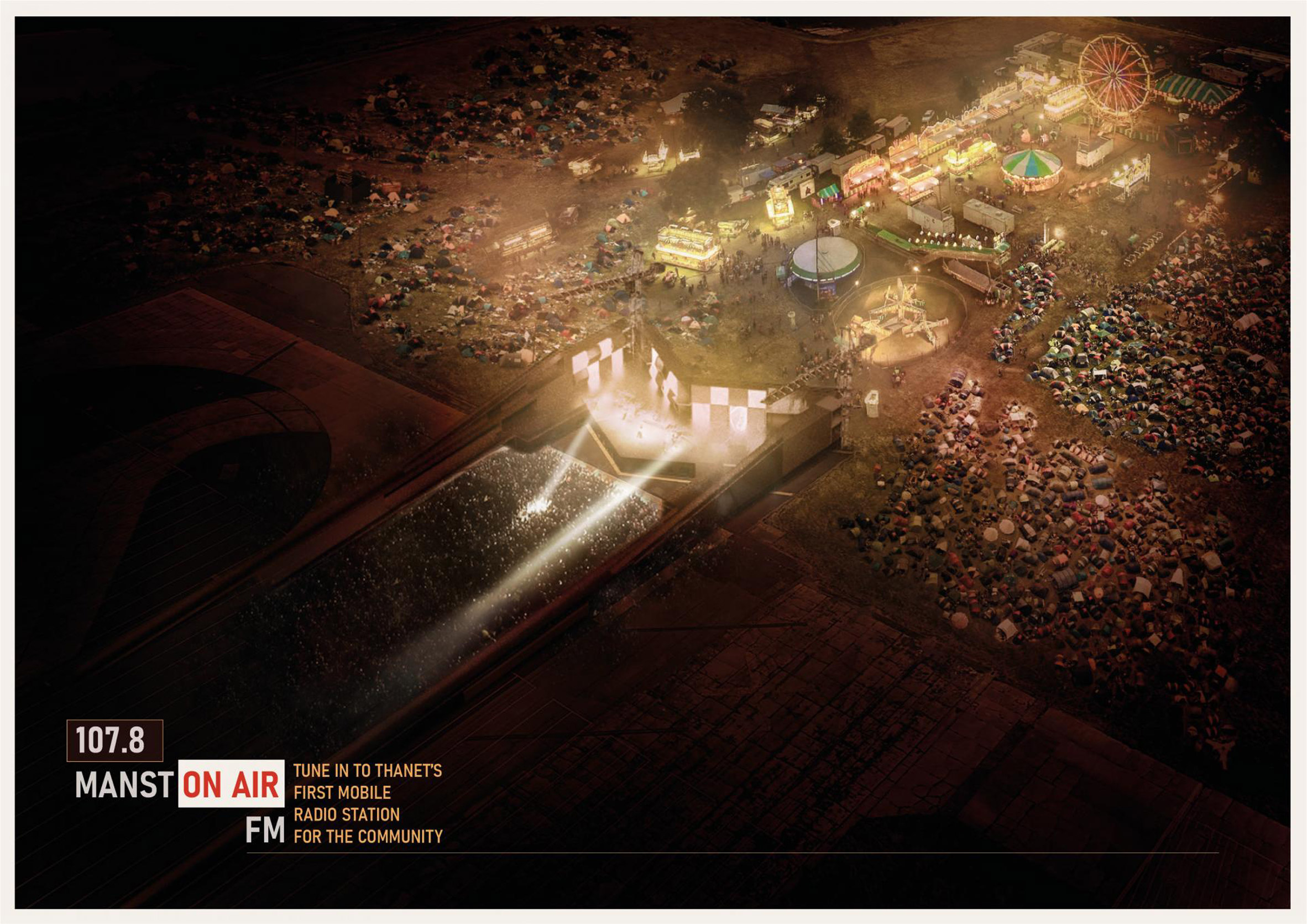 “This project explores the relationship between temporary architecture and permanent architecture through modules and permanent community hubs. Thavaseelan integrated spectrogram visuals within his drawings to highlight the ever-changing frequency aspect of radio to the proposal.

“He also produced accompanying music and at project film, to give the project extra depth.” 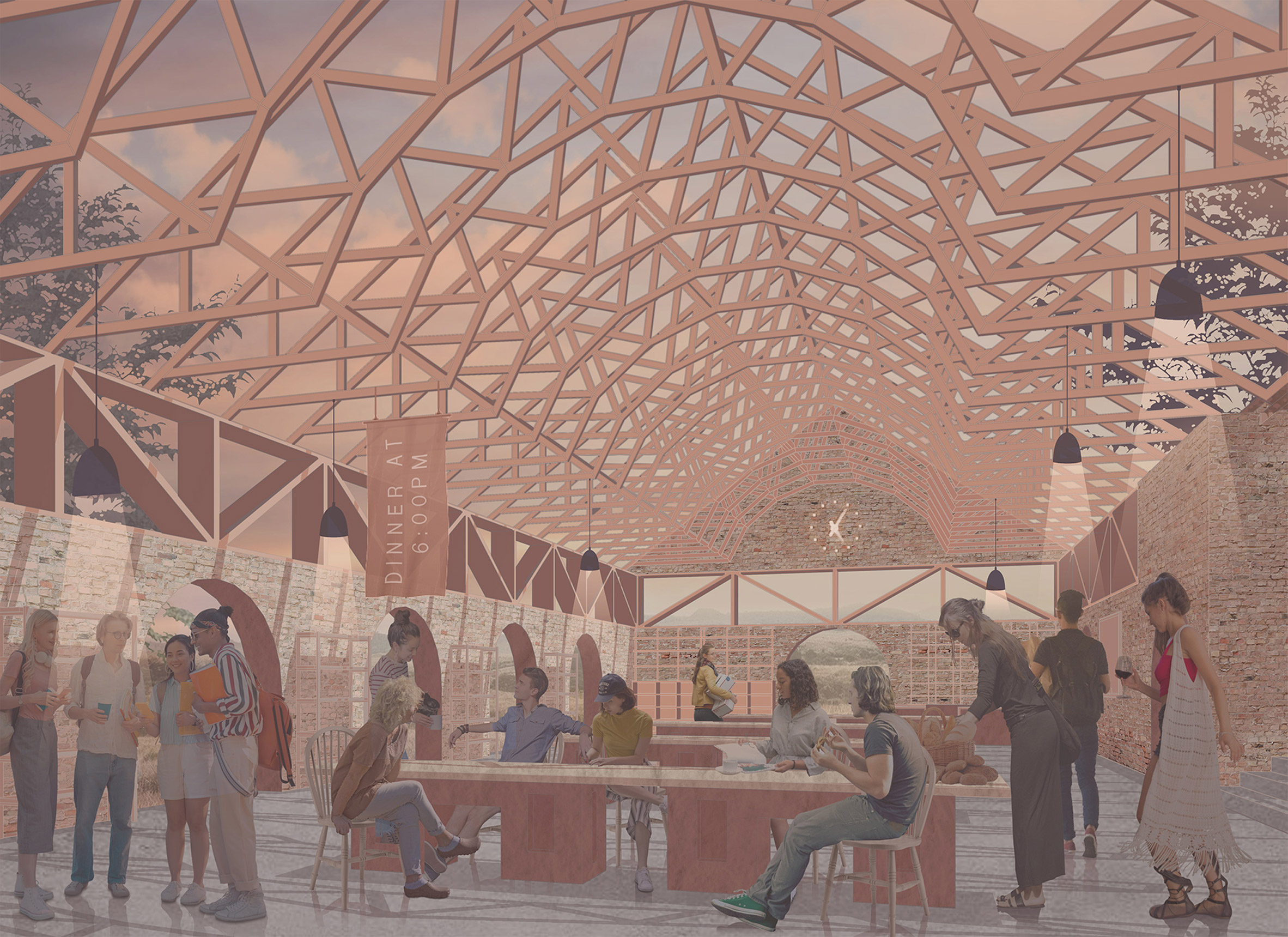 “Reeve’s project sets out a vision for a thriving community, bringing togetherness and independence to the small parish of Brandon. Each member is a guardian of protected land, working as merchants of the council, with an intrinsic relationship with the natural world at the very core of their lives at RAF Barnham.

“The protection of the Nightjar, the Curlew and the Woodlark bird species is central, their history and continued existence immortalised in the conservation efforts made by the community.

“This vision presents Reeve’s perspective on how we can make the best use of brownfield land to solve our housing crisis, by designating space for people not only to live but to work self-sufficiently and harmoniously with the land, honouring its history.” 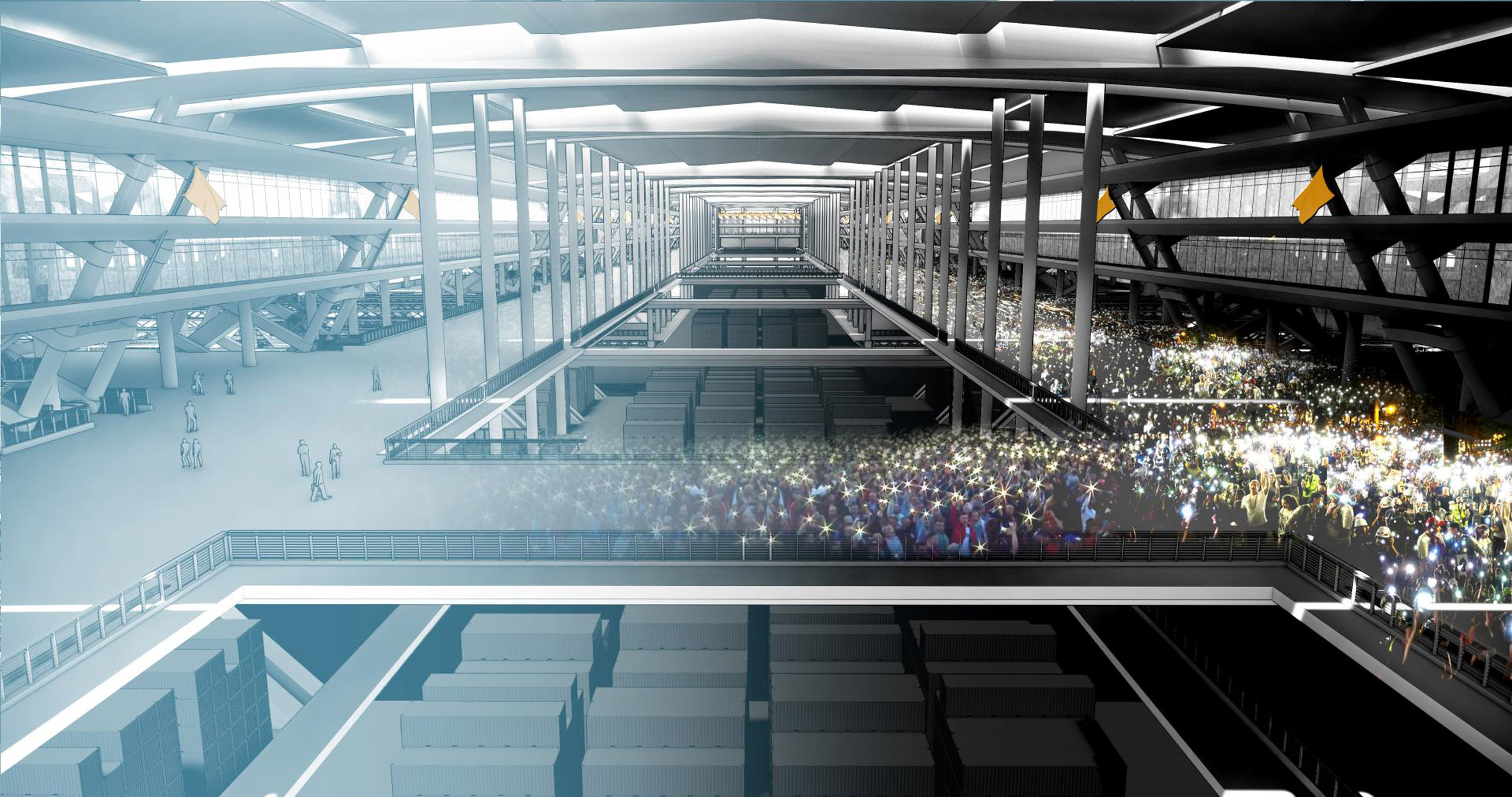 “Hong Kong has been an international trading city since the 19th century but is now at a crisis point in its history. With all the changes in both the legal and political status of Hong Kong in recent years, the unique identity and reputation of Hong Kong, under the ‘one country, two systems’ framework agreed in the Sino-British Joint Declaration in 1984, are now at risk.

“Chan’s Free Port is a complex consisting of the international embassy and congress buildings, as an extension to the cargo port of Hong Kong. With the uniqueness of this legal area, this could be transformed into an open ground for trade.

“With the Free Port, Hong Kong could maintain its position as a world-leading international trading city and retain its role as the window city of trade to the benefit of Mainland China.” 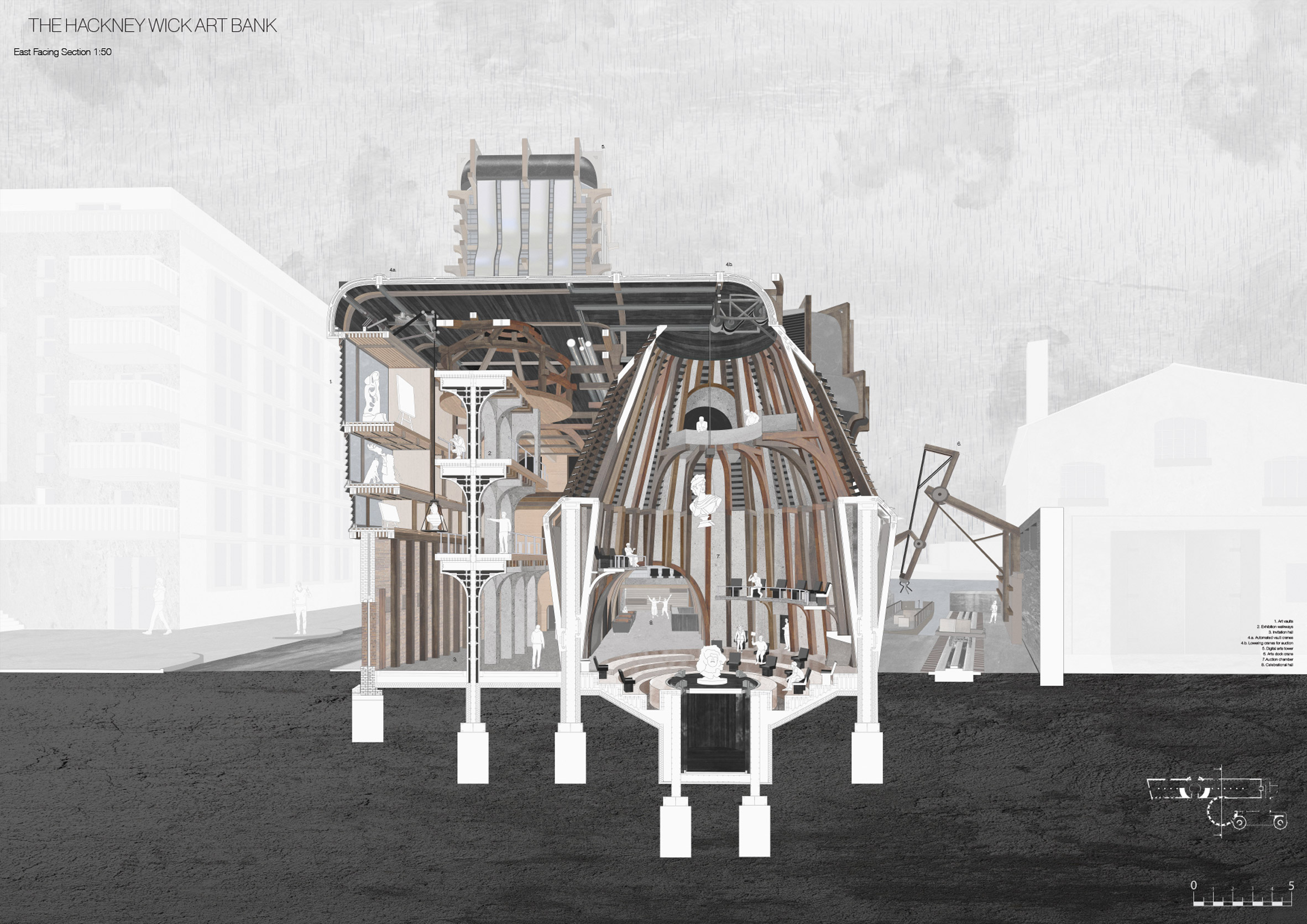 “Strange has designed a self-funded Art Bank in Hackney Wick, managed by local artists to benefit those involved in the arts, who are struggling due to the gentrification of Fish Island.

“Using the financial techniques of ‘securitisation’ and ‘leverage’, the narrative is achieved to use local artists’ work as a liquidated asset to purchase and remortgage lost workspace for artists on the island.

“Whilst publicising and securing future profits for artists’ liquidated work in the process, to further expand the circular economy of the narrative.” 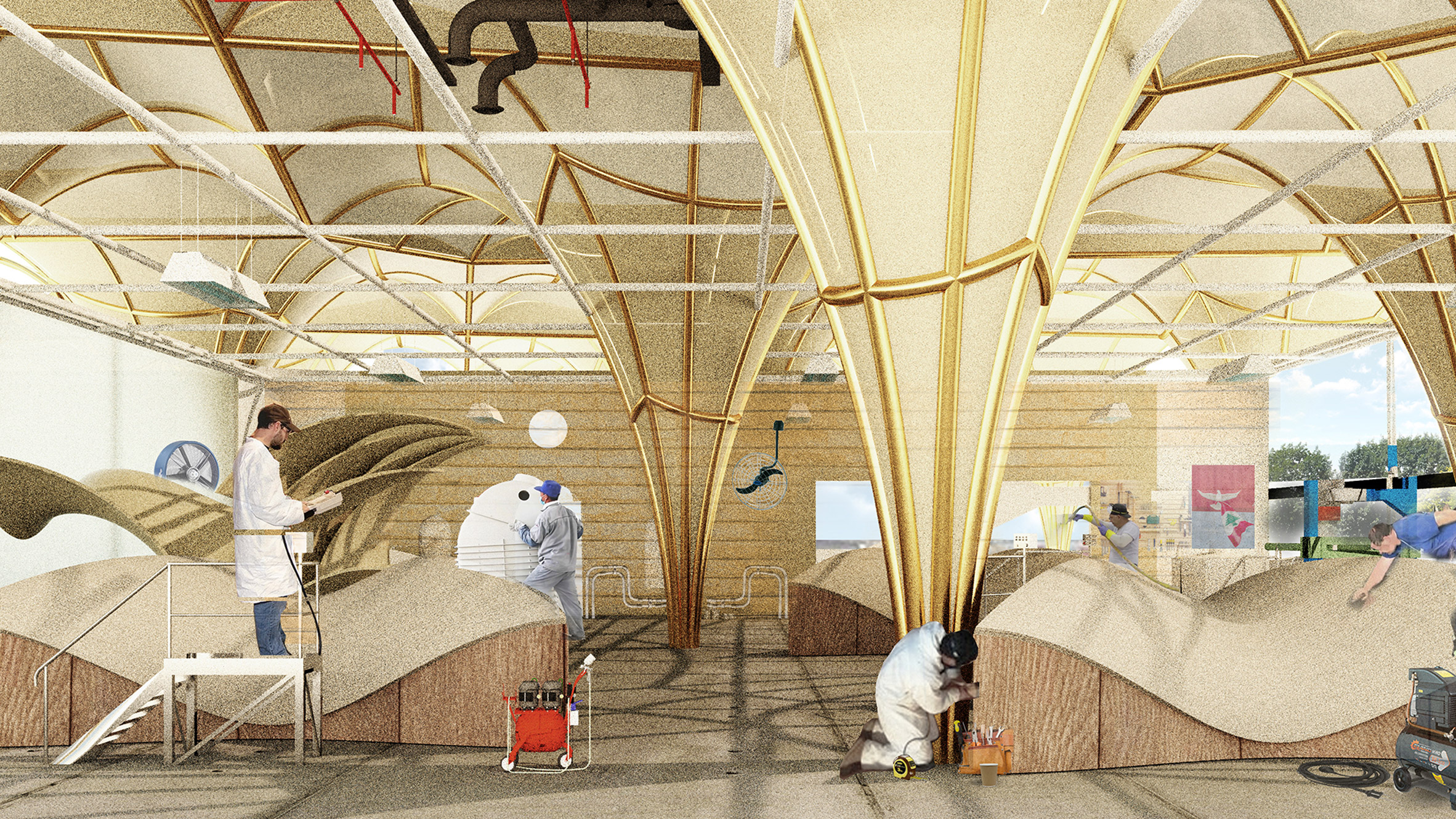 “Hanna’s project explores building a fibreglass factory in Beirut to deal with the devastating explosion in the city in 2020. Approximately 7000 tonnes of glass was shattered from buildings, and around 300,000 people were left homeless.

“Glass can still be found almost everywhere around the city due to the blast’s shock waves. Hanna’s project aims to reuse this material as fibreglass. The fibreglass will rebuild damaged areas by mass-producing identical curved leaf-like modular components assembled on-site by locals in the act of hope and unity.

“This bespoke modular system, aesthetically inspired by local Arabic architecture, will include elements such as arches and vaults to form the megastructure. Following the fibreglass factory and workshops build, further phases include a market and a residential area.”

“London School of Stone Masonry is a satellite stone masonry school in the heart of Fish Island that pays homage to ‘Stonemasons Yard’. Stonemasons are the most recent makers to lose their place in Europe’s creative capital due to the current Olympic regeneration scheme.

“The masonry school simultaneously serves London in its future construction the industry as we rediscover this age-old material and enter The New Stone Age, making use of this low carbon material and its cost-saving potential.”

“Harnessing urban development as a catalyst for the reclamation of valuable archaeological material, Wilkinson’s proposal aims to create a centre for the analysis and archive of such objects as well as an educational institution for study in this field.

“The need for the building is propelled forward by the statutory assessment of archaeological remains as part of the planning process for development projects. Proposed building development plans across the London area mean there is a need for substantial archaeological work. The London Plan and its infrastructure links nationally and to Europe.” 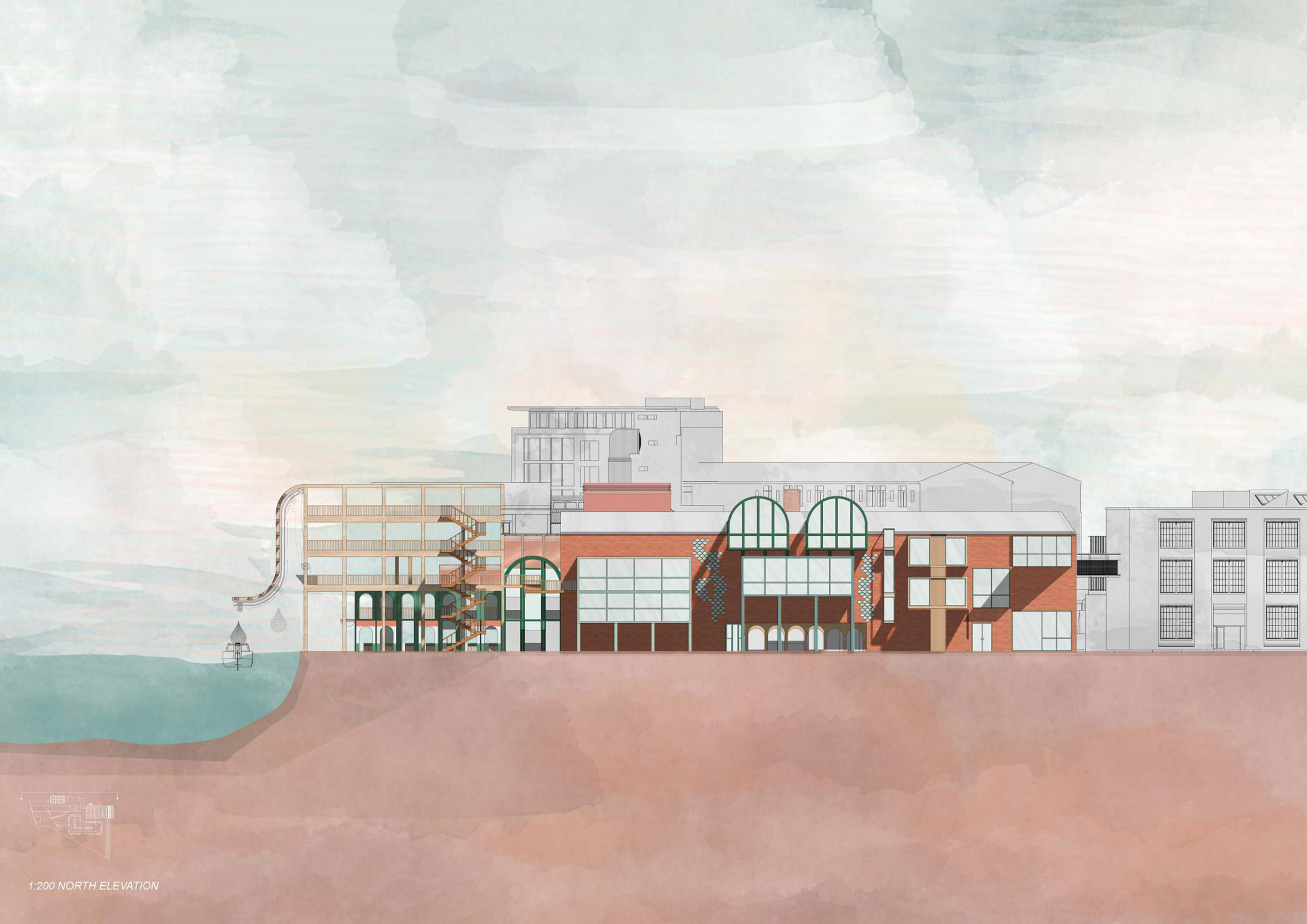 “De Silva’s project explores the UK fishing industry and the negative impact of Brexit on the livelihoods of hundreds of fishermen. To counter the problem, De Silva has designed Swan Wharf. This building offers a helping hand to local fishermen in the area, with the support of consumers and small businesses dedicated to aiding this small but hard-working population.”

“Ian’s project is a response to gentrification. It experiments with ideals of participatory democracy, social commons and protests to project a societal spirit of individuals as citizens, not consumers.

“Central to the project is a democratic hall where actors participate in creating specialised and specific legislation for the municipal area of Fish Island. This project aims to return ownership and direction of cities to the people who live in them, not investors who profit from them.”

This school show is a partnership between Dezeen and the University for the Creative Arts. Find out more about Dezeen partnership content here.

The post 11 architecture projects from students at the University for the Creative Arts appeared first on Dezeen.