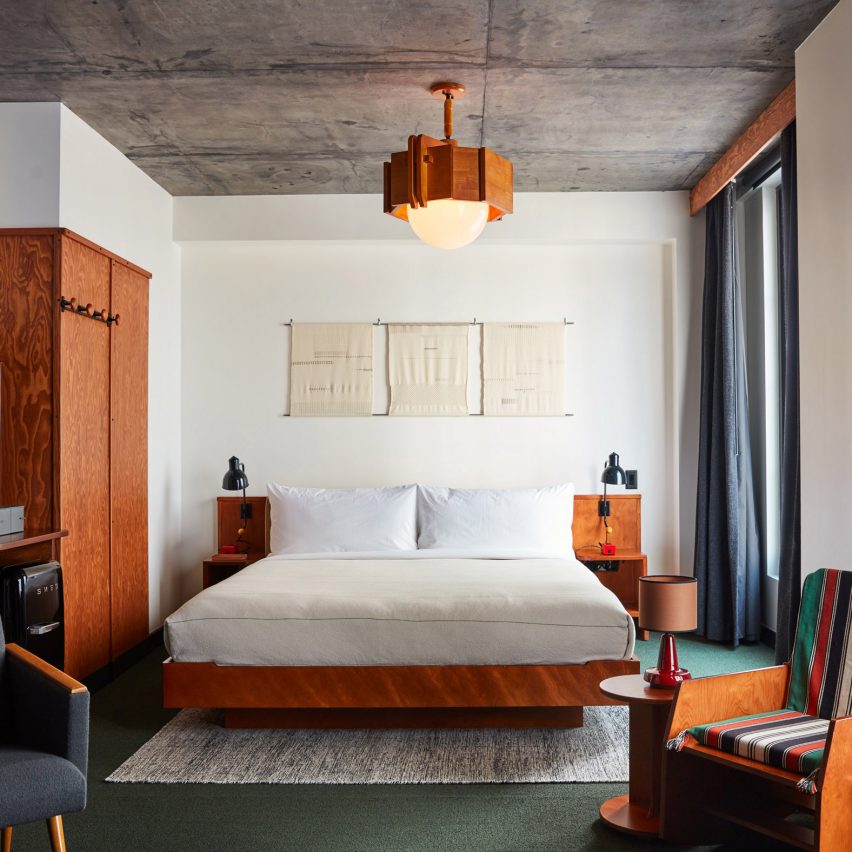 The Ace Hotel‘s newest outpost in Downtown Brooklyn by interior designers Roman and Williams features art in every room, and a public gallery in its lobby with rotating exhibitions.

Located between the neighbourhoods of Fort Greene, Boerum Hill and Downtown Brooklyn, New York City’s second Ace Hotel is now open to the public. It is the third collaboration between the hospitality brand and Roman and Williams, after opening hotels in Manhattan and New Orleans.

The 13-storey concrete-and-glass tower was designed in collaboration with architects Stonehill Taylor. One of Ace Hotel’s main goals was to spotlight local artists, providing opportunities for exhibitions in most of the property’s 287 guest rooms, as well as in communal areas and on the building’s facade.

“We’re proud to have filled its spaces with the talents of many collaborators across art, design and culture; it’s a testament and tribute to the irrepressible creative energy of the borough,” said a statement from Ace Hotel president Brad Wilson.

At the hotel’s covered entrance, visitors are greeted by a double-height ceramic installation by modernist sculptor Stan Bitters. The common areas also feature works of art, including a sculpture in the bar by Verdan Jakšic, as well as a large-scale drawing by Tara Geer.

In addition to offering typical hotel amenities, the Ace Hotel’s public area hosts an art gallery. “The Gallery at Ace Hotel Brooklyn will showcase works by artists featured in the guest rooms, starting with a show of textile works by Cynthia Alberto and Weaving Hand in July and August 2021,” said a statement from the hotel.

Guest rooms feature colourful selections that contrast the building’s neutral concrete tones. The artwork selection and coordination was curated by Niki Tsukamoto, who also is a practising artist.

The design of the rooms themselves was influenced by Le Cabanon, a Mediterranean retreat in the South of France that Le Corbusier used as an escape.

“The guest rooms at Ace Hotel Brooklyn were imagined as cabins of creative refuge: elegant and efficient, with the kind of breathing room that stirs up all sorts of possibilities,” said the hotel team.

The rooms feature exposed concrete finishes, simple plywood furnishings, and generous windows that let in plenty of natural light. The bed covers were crafted by Heritage Weavers, a family-owned mill in Maine that has been operating since 1850.

Other unique items that can be found in the rooms include acoustic guitars by D’Angelico Guitars and turntables by Music Hall. The records were curated by Rough Trade, a famed local store that opened in 1978.

Founded in 1999 in Seattle, Ace Hotel now has 11 locations, most of which are in the US. Chicago and Downtown Los Angeles are among its portfolio.

Downtown Brooklyn is currently seeing a development boom, with projects nearby the hotel including a residential tower by Studio Gang that features a sweeping concrete facade, and a supertall skyscraper by SHoP that has just become the borough’s tallest building.

The photography is by Stephen Kent Johnson.