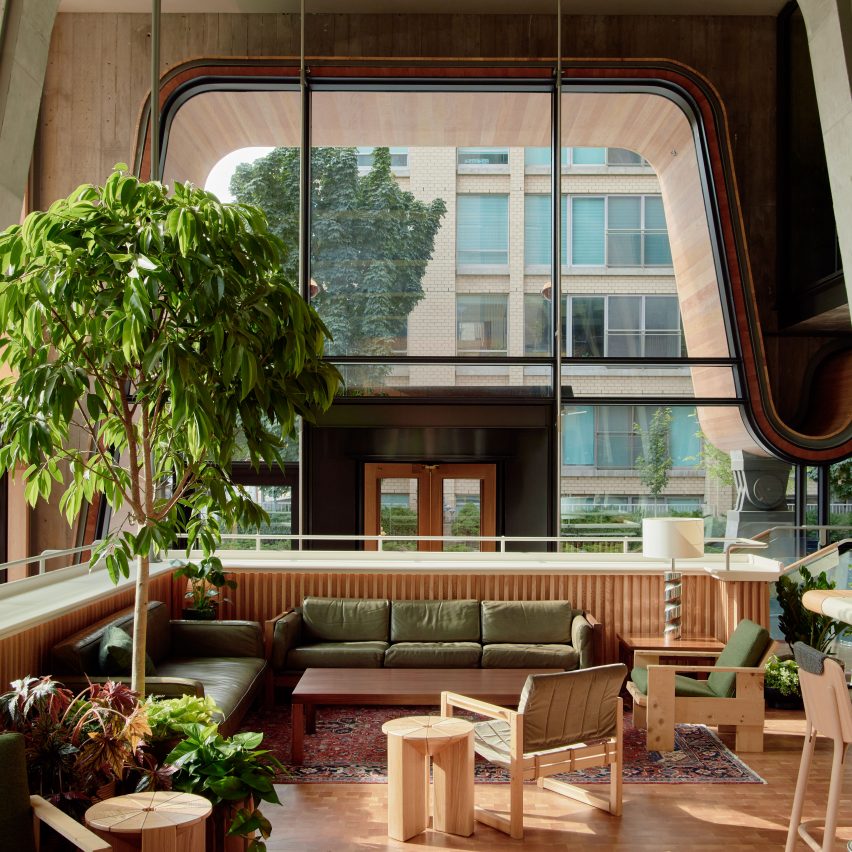 Canada’s first Ace Hotel has opened in Toronto, housed in a new building by Shim-Sutcliffe Architects that features a lobby suspended from huge concrete arches.

The ground-up project was built in the city’s Garment District, close to Downtown and the bustling Queen Street West area, which has a history of manufacturing but is now associated with arts and culture venues.

Toronto-based Shim-Sutcliffe Architects, which was awarded Canada’s RAIC Gold Medal in 2021, worked with Ace Hotel‘s in-house studio Atelier Ace to design the 123-room hotel so that it would fit within its surroundings.

“Our intention with Ace Hotel Toronto was to make a positive contribution to our city, a welcoming civic space where life happens and memories are made, and where both locals and their guests feel equally at home,” said Shim-Sutcliffe Architects co-founder Brigitte Shim.

“They have built an inherently civic space that respects the neighborhood’s storied past while nurturing its future,” added Ace Hotel Group CEO Brad Wilson.

The building is clad in red bricks laid in various patterns across the facades, which were designed to recall “the important role bricks pressed from Don Valley clay played in forming the city’s visual identity,” according to the hotel’s team.

Along the street front, an awning extends to shelter a walkway and swoops over the entrance to form a trapezoidal shape with curved corners.

The same shape is repeated by the huge structural concrete and steel arches inside, from which the elevated lobby area is suspended via slender steel rods.

A bar and lounge seating occupy this elevated space, which is decorated with shades of green and warm red oak.

Some furniture and lighting were custom-designed for the project, while other vintage pieces were sourced locally.

As at other Ace locations, the lobby is intended as a community meeting space, serving coffee and pastries in the morning and drinks and small plates later on.

It will also host a calendar of music, arts and cultural programming, similar to the recently opened Ace in Downtown Brooklyn. 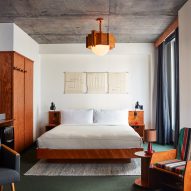 Underneath the lobby is a sunken Mediterranean-influenced restaurant named Alder, helmed by chef Patrick Kriss, where darker tones create a more intimate atmosphere. Dinner service will begin on 9 August 2022.

The hotel also has a rooftop bar called Evangeline, which will offer panoramic views from its indoor and outdoor lounges 14 storeys up when it opens later this year.

Original works by primarily Canadian artists are featured throughout the hotel rooms and common areas.

They include Horizon Line, a three-storey, site-specific installation in the lobby designed by Shim-Sutcliffe Architects’ other co-founder, A Howard Sutcliffe.

Conceived as “urban cabins”, the guest rooms feature deep window benches for gazing out onto nearby landmarks, such as St Andrew’s Playground Park across the street.

“Ace Hotel Toronto reflects the city’s past through a prismatic and future-facing vantage — preserving its layered legacies and adding texture with considered design and feeling,” Ace Hotel said.

Ace Hotel now has 10 locations, most of which are scattered across North America.

However, the group opened an outpost in Sydney earlier this year following Kyoto in 2020, although the Ace Hotel in London closed the same year.

The photography is by William Jess Laird unless stated otherwise.