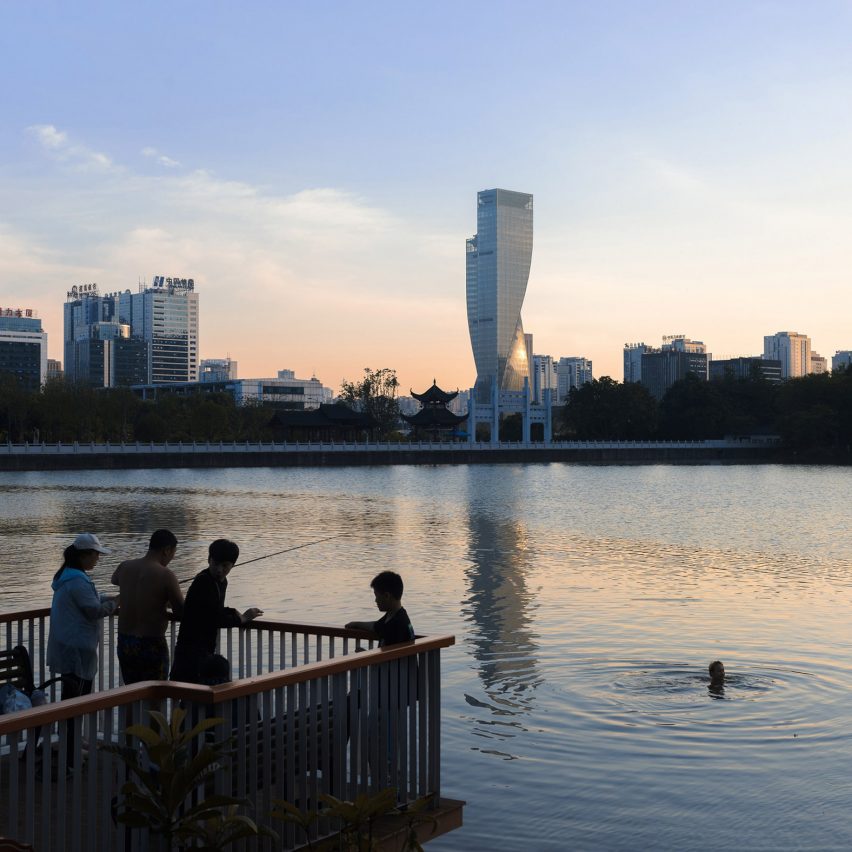 Architecture studio Aedas has unveiled its Dance of Light office skyscraper in Chongqing, China, with a twisted facade informed by the shape of the northern lights.

Located on Xingfu Plaza in the Jiangbei District of Chongqing, the 180-metre-tall tower has two double-curved facades that create the impression that the building is being twisted.

Aedas designed the 39-storey skyscraper to be a landmark building in the business district where each of the buildings were informed by stars and celestrial bodies.

The studio chose to focus its building, which is nicknamed Dance of Light, on the curved shape of the northern lights – also known as the Aurora Borealis.

“The concept of the Dance of Light was proposed to celebrate the achievement to embrace technology by the city of Chongqing,” said Aedas global design principal Ken Wai.

“The Dance of Light is derived from the mesmerizing phenomenon of northern light that lit up heaven,” he told Dezeen.

“They are natural, dynamic and elegant, all the important aspects we would like to achieve in our tower design.”

Working with facade consultant RFR, the design team aimed to create a smooth external facade rather than the angular forms seen on other rotated buildings. To achieve this the building’s facades were clad in double-curved, cold-form glass.

According to the studio, the building has a “twisting angle” of up to 8.8 degrees per floor, which it believes is 1.5 times more than any other skyscraper, making it one of the “most twisted towers in the world”. 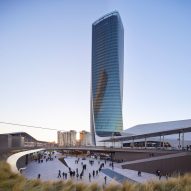 “To pursue the concept of the Dance of Light, the design team set their goal to utilise light to define architecture,” said Wai.

“This is a huge challenge and through the creation of two distinctive twists, a curvaceous form is generated that allows natural light to follow the contour of the building to give character and a special signature,” he continued.

“By integrating two opposing twists at each end of the building it will present an ever-changing facade to the urban context.”

Wai hopes that by creating a smooth facade that is interrupted by curved, silver-coloured vertical mullions, light will reflect off the building, giving it a different appearance from different angles and at different times of the day.

“By using strong vertical lines in the shape of semi-circular external mullions, natural light will be able to follow the contour of the building,” he said.

“The mullions are painted in bright silver PVF2 finish and through contrasting light conditions, the reflection and refraction of the facade express the unique concept of the dance of light.”

The tower contains 34 floors of office space topped with five-storeys of meeting rooms and facilities, described by the studio as a “district reception space for guests”.

Alongside the building, a low-level block contains restaurants and cafes and is topped with a roof with a twist as a nod to the form of the skyscraper.

Other twisted skscrapers around the world include Zaha Hadid Architects’ 170-metre-high Generali Tower in Milan and a 307-metre skyscraper designed by SOM in Dubai.

The post Aedas unveils "most twisted tower in the world" in Chongqing appeared first on Dezeen.