Apple CEO Tim Cook has unveiled visuals of the tech giant’s offices within Battersea Power Station, which it is designing with UK studio Foster + Partners.

As revealed by Cook in a tweet, the office is expected to open early next year and will provide a workspace for many of Apple‘s corporate employees based in the UK.

Foster + Partners will design the office over six floors of the former boiler house at the Battersea Power Station, which reopened on the River Thames on 14 October.

After an extensive renovation by architecture studio Wilkinson Eyre, the 1930s industrial building now also contains over 100 shops and 254 apartments.

“Apple has been part of the London community for more than 40 years, and we’re thrilled to soon bring some of our teams together in the historic Battersea Power Station,” said Cook.

“Once a source of energy for much of London, the transformation this building has undergone honors London’s past and celebrates its future. We’re so glad to be a part of it.”

Offices will surround an atrium

According to Apple, the offices will encompass 46,000 square metres, split over six floors inside the former industrial building

The workspaces are being developed to maximise opportunities for collaboration as well as employee wellness.

In the visuals released by Cook, the six floors of offices can be seen around a large glass-roofed atrium lined with trees.

The floors will be linked by bridges and incorporate brick-lined balconies.

According to Apple, the bricks will be hand-fired at the same quarry in Gloucestershire where the power station’s original bricks were made more than 70 years ago.

These are among the design decisions made by the tech company with Foster + Partners and preservation specialists such as English Heritage to ensure the design is sensitive to the existing architecture.

Apple’s collaboration with Foster + Partners at Battersea Power Station is not the first time the two companies have worked together.

The studio has designed many Apple Stores for the tech giant, a number of which have a similar aesthetic to the Battersea office. Examples include the tree-lined Apple Iconsiam in Thailand and the cuboidal Apple Centre Cotai in China that is organised around a central atrium. 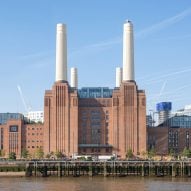 Battersea Power Station originally opened in the 1930s with a design by British architect Giles Gilbert Scott and was later extended to create its iconic four-chimney-form.

After being decommissioned between 1975 and 1983, the building sat empty for nearly 30 years, but today it forms the heart of a new neighbourhood in Battersea.

To mark its opening last week, we published a series of photos that show the rejuvenated building alongside historic pictures of it in use and as a ruin.

The images are courtesy of Apple.