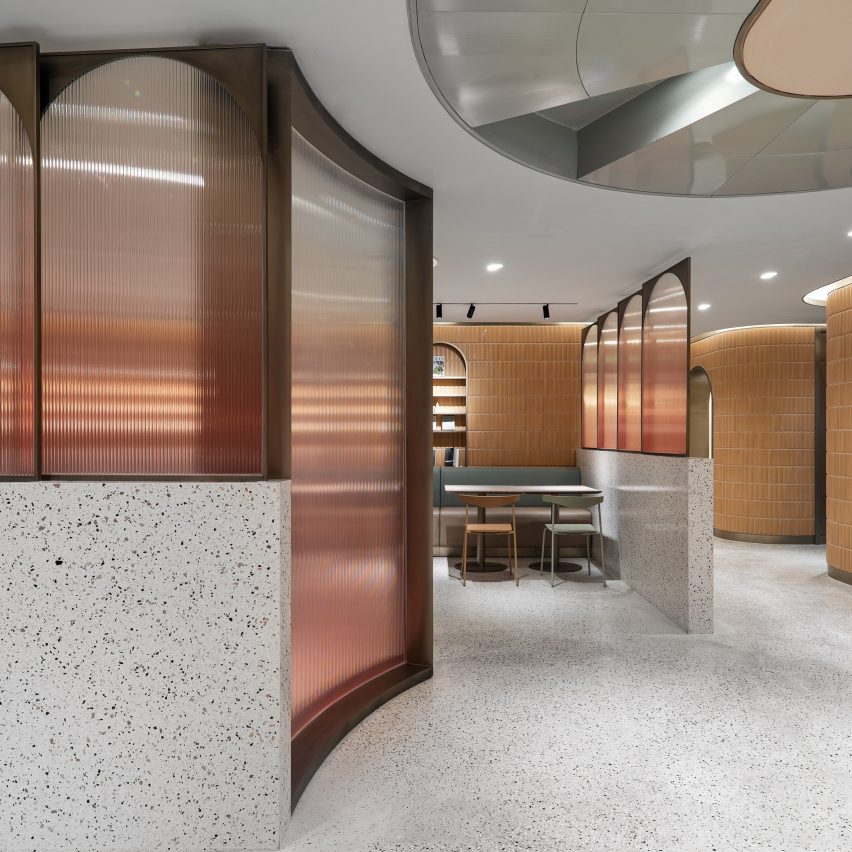 London studio SHH has used ribbed glass panels in graduated sunset colours to provide a sense of the outdoors in this basement dining hall in Beijing‘s central Chaoyang district.

Located on the lower ground floor of a twenty-storey building, the dining hall spans more than 1,670 square metres and is split into three distinct zones – a bright, all-day canteen, a traditional hotpot restaurant and a formal dining room.

“The architecture of the building is very precise, almost stern, with lots of white and beige,” lead SHH designer Thomas Chan told Dezeen. “What we’ve tried to create is a little bit of fun and hospitality to contrast the corporate face of the rest of the building.”

The main servery area, which operates from breakfast through to the evening, is symmetrically arranged and leads visitors in a circular route past food stalls serving up Chinese and international dishes.

Wood panels, terrazzo and orange porcelain tiles were used to create a warm atmosphere while a mix of direct, indirect and concealed lighting creates brightness in the absence of natural light.

The arched, ribbed glass panels that line the seating areas are tinged in the warm pink ombre of dusk – an effect that is created by sandwiching a digitally printed gradient film in between two sheets of glass.

“Their playful shape is a bit like a window where windows aren’t possible and the glass catches the light and amplifies it,” Chan explained.

A hotpot restaurant, which is used at lunchtime and in the evening as a dinner and events space, is located off the main dining hall space.

It features slatted timber walls and distinctive metal arches that cover the tables at the rear.

An intimate dining space decorated in different tones of grey is located opposite the main dining area and lends itself to more formal meals or to host clients.

The room’s dark-toned walls form shallow alcoves for artwork displays while glass partitions have been introduced for more privacy between dining tables.

“The operating hours and usages also influenced the choice of colours,” said Chan. “For the main dining hall, which is used all day, we created a light and vibrant palette.”

“The private dining space, which is used for lunch and in the evening has a darker and moodier atmosphere while the hotpot restaurant is somewhere in between,” he continued.

“Then there’s the ribbed glass with its colour, which is like a perpetual dawn or perpetual dusk, depending on which space you’re in and at what time of day it is on your watch.”

Other horizon-hued eateries include a Parisian burger restaurant by CUT Architectures that pays homage to California and a Hong Kong cafe where a terracotta colour scheme and semi-circular forms reference Australia’s spectacular sunsets.

Photography is courtesy of SHH.