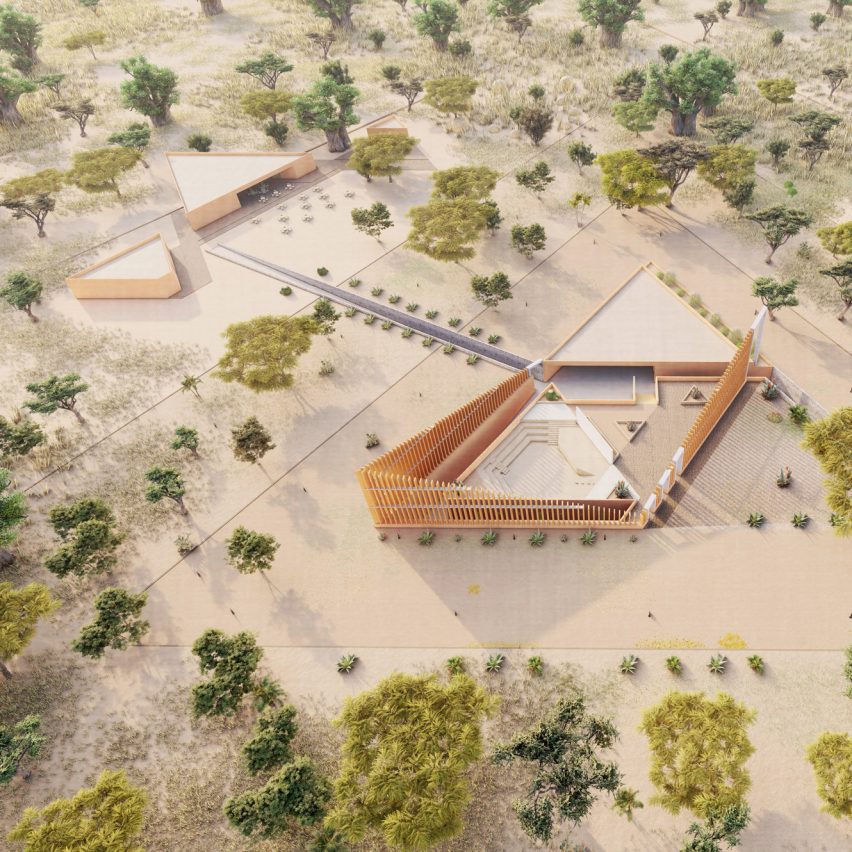 Nigerien architect Mariam Kamara‘s studio Atelier Masōmī has revealed visuals of the Bët-bi museum in Kaolack, Senegal, which will draw on the area’s ancient megaliths.

The museum, which will showcase contemporary and historic African art with a special focus on sub-Saharan Africa, will also function as a centre for culture and community.

Located in Kaolack in southwestern Senegal, a region that is known for its ancient stone megaliths, the 1,000-square-metre building was designed in response to its surroundings.

Museum to build on “significance of the area”

“Atelier Masōmī ‘s proposal links the history of the stone megaliths with the present – building upon the significance of the area through a sensitive response to both the cultural heritage of the site and its future potential,” the studio said.

Visuals of the building show five triangular volumes that are split into two groups and connected by a walkway. The museum will be constructed using “sustainable and traditional methods of building,” the studio said.

Atelier Masōmī plans to work with local artisans on the project to help draw attention to the region’s heritage. The Bët-bi museum’s design references the people who jointly founded the area, the Serer and the Mandinka.

“The Mandinka have historically been people of empire and monumental architecture, which provided us naturally with direct references for building,” Kamara told Dezeen.

“The Serer, on the other hand, held a deeply mystical indigenous religion that had an intimate relationship to the natural elements: the sun, the wind, water, ancestral spirits.”

Atelier Masōmī drew on the Serers’ belief system when creating the shape of the triangular buildings.

“The starting point came from looking at this traditional spiritual realm and the series of triangles that define the relationship between the elements, the living and the dead – a self-renewing cycle,” Kamara said.

“It also provided a good way of organising program that is interconnected yet distinct.”

The Bët-bi museum will house exhibition and event spaces as well as a library and community rooms. It is slated to open in 2025.

Bët-bi, which means “the eye” in Wolof – one of Senegal’s national languages, will be staffed with locally recruited curators and staff.

As well as showing contemporary art, the museum also intends to serve as a temporary space for repatriated African objects and aims to play a role in global initiatives to secure the return of West African objects.

“It is a great honour and a privilege to be selected to lead the design of Bët-bi,” Kamara said. “For far too long our region has been a place where cultural wealth is pillaged to profit museum collections.”

“This project is an opportunity to design a new type of space that is inspired by the roots and spiritual legacy of the region,” she added. “It is a chance to push the boundaries of what defines a museum in the 21st century.” 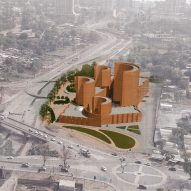 The museum will be operated by non-profit organisation The Josef and Anni Albers Foundation together with La Korsa, its sister organisation in Senegal.

Atelier Masōmī was selected for the project from a shortlist of four African architectural firms, coming out ahead of Aziza Chaouni Projects, MASS Design Group and Meskerem Assegued and Elias Sime.

The studio’s recent projects include a market in Dandaji, Niger and a library and community center in a formerly derelict mosque.

The visuals are courtesy of Atelier Masōmī.