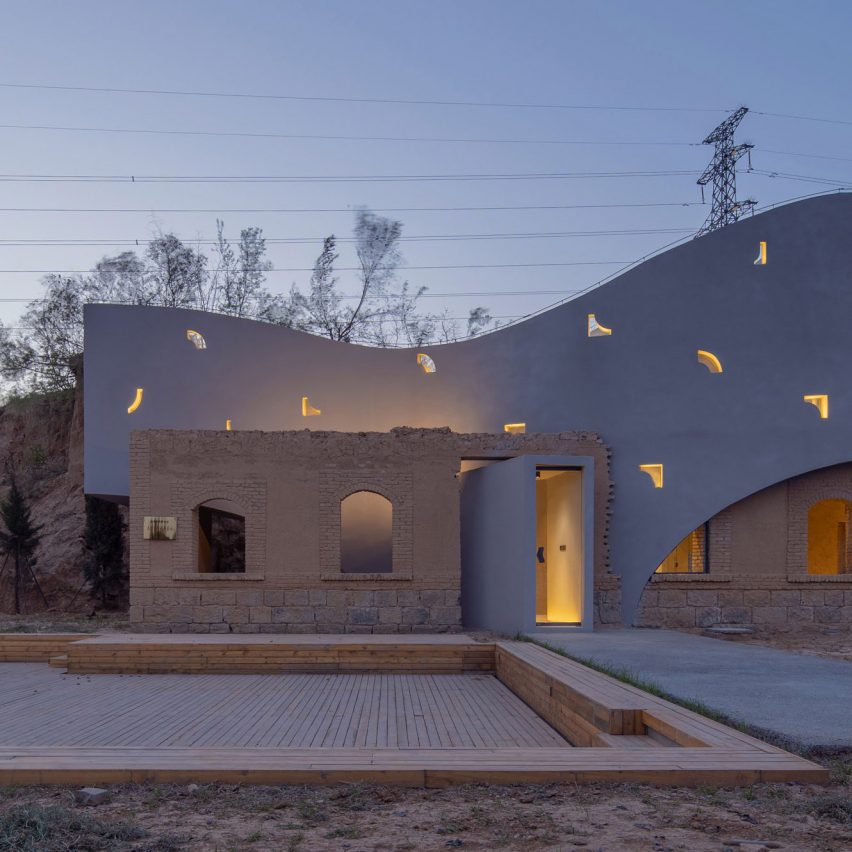 Chinese architecture studio Atelier Xi has completed a library in Henan province featuring a curving concrete volume that emerges from the ruins of a derelict house.

Library in Ruins is part of a series of buildings designed by Shenzhen-based Atelier Xi for the municipal government of rural Xiuwu County.

The firm was initially commissioned to design a large public building housing various cultural amenities for the county’s inhabitants.

However, due to Xiuwu’s large area and the difficulty of travelling between scattered villages, the architects suggested separating the proposed functions and distributing them across various buildings in different locations.

Each of the buildings in the Miniature Series is constructed using in-situ cast concrete and features organic forms intended to evoke tree branches reaching towards the sky – like the Peach Hut community pavilion, based on the shapes of nearby peach trees.

The library building is located in Sunyao Old Village, a mountainside settlement comprising cave dwellings and buildings made from adobe mud. The village was gradually abandoned from the mid-1990s onward as the population moved to newly constructed accommodation nearby.

Having initially examined the possibility of restoring one of the derelict houses to create the library, the architects found there were no longer any craftsmen with the traditional skills required to extend the existing rammed-earth walls.

Instead, the library’s design features a concrete form constructed within the existing walls. The new volume both evokes the heavy construction of the old buildings and is clearly identifiable as part of the Miniature Series.

“[We] proposed to build with a new method to allow a new structure to grow from the old ruins,” explained Atelier Xi, “allowing the new building to become a spatial device where people enter the ruins, jump over the old houses and gaze into the village, the fields and the mountains in the distance.”

The design carefully blends the old and new parts of the building, retaining many of the original features while creating a strong contrast through the form and materiality of the contemporary addition.

The original doorway now forms the new entrance, which is marked by a protruding concrete volume that intersects with the existing earth wall.

A corner of the original wall guides visitors toward a gravel garden at the rear of the building, which faces onto the adjacent cliff and network of cave dwellings.

Inside the building, the compact ground floor can be used as a projection room and reading space, with bookshelves and bench seating incorporated into the curving stair.

Curving concrete surfaces overlap the existing structure and extend upwards to create space for a tea room above the ground-floor reading room.

“The facade and internal spaces of the building unfold in a topographic approach,” Atelier Xi added. “The undulating outline of the roof echoes the terrain and distant mountains, and the roof ground naturally forms an outdoor terrace and a slide for children.”

The building’s fluid shapes complement the natural forms of the surrounding trees and landscape, which are visible from inside through large, full-height openings at either end of the first floor.

The in-situ concrete walls also incorporate small cutouts shaped to echo the forms of buildings in the Miniature Series.

“These irregularly shaped openings curate a play of shadow during the day,” added Atelier Xi, “and create a backdrop of twinkling lights throughout the night.”

The curving forms extend to the exterior landscaping and paths that connect the library with the adjacent caves and a public square used to host meetings and festivals.

The photography is by Zhang Chao.