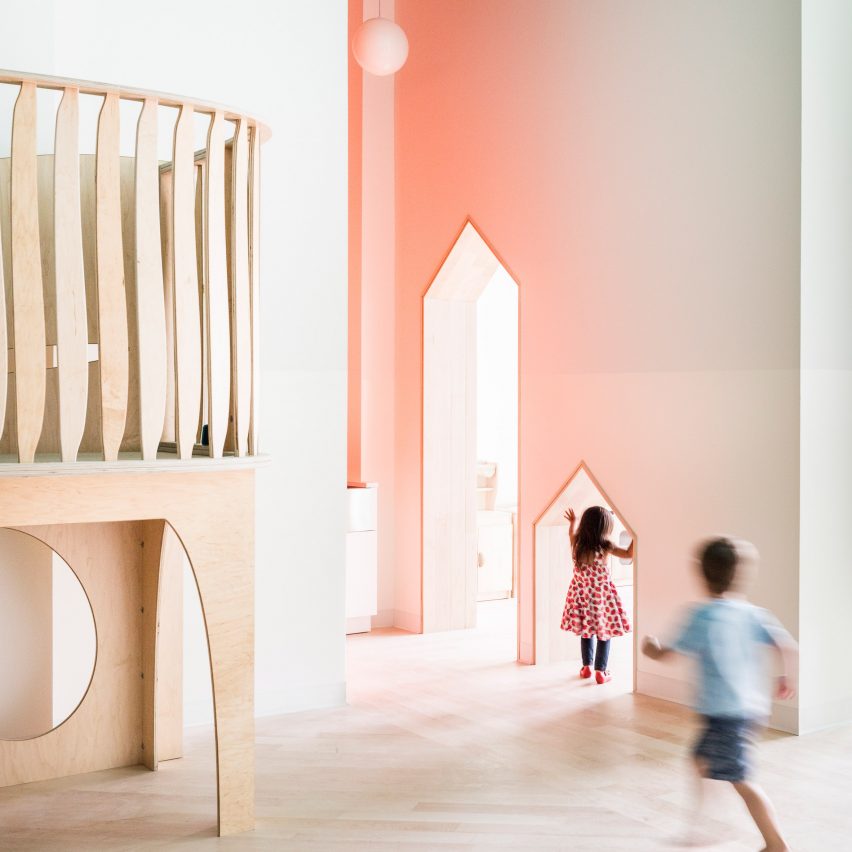 House-shaped openings and cheerful hues are found in a New York daycare centre designed by American firms BAAO and 4|MATIV.

The Mi Casita Preschool and Cultural Center is located within a new mixed-use development in the Bedford-Stuyvesant neighbourhood. The 3,500-square-foot (325-square-metre) space was designed collaboratively by local firms BAAO and 4|MATIV.

The goal was to create a space that embodied the school’s mission of being a “home away from home” and celebrated the different cultures that coexist in Brooklyn.

The centre features several rooms that are loosely organised around an L-shaped trough, which functions as both a bathroom sink and a social gathering spot. Natural light flows in through large, street-facing windows.

The space features simple and clean finishes, including white walls and pale maple flooring. Pops of colour are incorporated throughout.

“Colour is used for dramatic effect throughout the space,” the team said. “Turquoise on the ceiling and light globes give the sense of being under a bright blue sky.”

The blue is paired with splashes of sherbet orange, which is found on walls in the main area and in a stairwell leading down to a co-working space for parents.

The school’s mission inspired the development of graphic elements that relate to home and the city. In the bathroom, for instance, the team installed tilework that resembles a collection of buildings.

“A graphic in shades of pale blue in the tile mosaic around the bathroom and trough sink references the city skyline and is echoed as a linear element in the window treatment,” the team said.

In other areas, the designers created wall cutouts that are shaped like gabled houses. The openings serve as passageways and child-sized reading nooks.

On the mezzanine, a house-shaped cutout holds seasonal displays that relate to the curriculum.

Movable furniture allows the nursery to be reconfigured for special events, including performances organised by an artist-in-residence.

This isn’t the first time that BAAO, formerly known as BFDO, and 4|MATIV have collaborated. The two firms previously worked together on the Maple Street School in Brooklyn, which features soft pastel tones and an abundance of wood.

The photography is by Lesley Unruh.