Geneva studio Leopold Banchini Architects created the textile factory and social space for the local craftspeople of Bani Jamrah, a village that is renowned for maintaining a traditional weaving method.

The Al Naseej Textile Factory takes its cues from this historic weaving method and also references arish shading structures that are made by weaving the dried leaves of date palms.

It was commissioned by Bahrain Authority for Culture and Antiquities as part of a programme aimed at reinvigorating traditional crafts and industries across the country.

The ancient weaving technique of Bani Jamrah involves interlacing two types of wool to create cloth with detailed and colourful patterns. Artisans use a wooden loom to produce lengths of the textile for traditional clothing and scarves.

Weavers use their hands and legs to operate the loom and would traditionally have dug holes in the earth to fit their legs so they could stretch the threads out on the ground.

The woven panels that surround the Al Naseej Textile Factory are supported by a gridded timber framework that nods to date palm plantations in the north of Bahrain.

This low-lying wooden structure organises the space and is positioned around palm trees that extend through openings in the factory’s roof.

“The resulting building is a low and quiet gridded street elevation stretching the entire boundary of the site,” the architects explained.

“Only the palm trees pierce through the horizontal ceiling and become the expression of the building.” 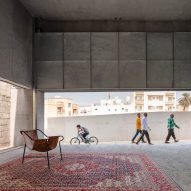 Inside the facility, the floor level is interrupted by several pits in which the weavers sit while using their looms.

Other voids built into the floor help to organise the internal space into areas for tapestry production and social activities.

Some of the holes also contain ponds or fountains that introduce a calming natural element to the space.

The use of the arish panels and facade openings help to naturally ventilate the Al Naseej Textile Factory. Specific functional areas are enclosed using glass walls that maintain the open feel of the interior.

“Composed of regionally available materials, the construction of the building relies upon and celebrates local construction and craft traditions,” the studio added.

“The shaded structure, greenery, water network and seating areas create a naturally refreshing garden for the inhabitants of the village; a woven architecture.”

The studio’s previous projects include a concrete exhibition space in Bahrain featuring retractable glass walls and a home with glass-walled rooms that was designed with architect Daniel Zamarbide.

The photography is by Dylan Perrenoud.