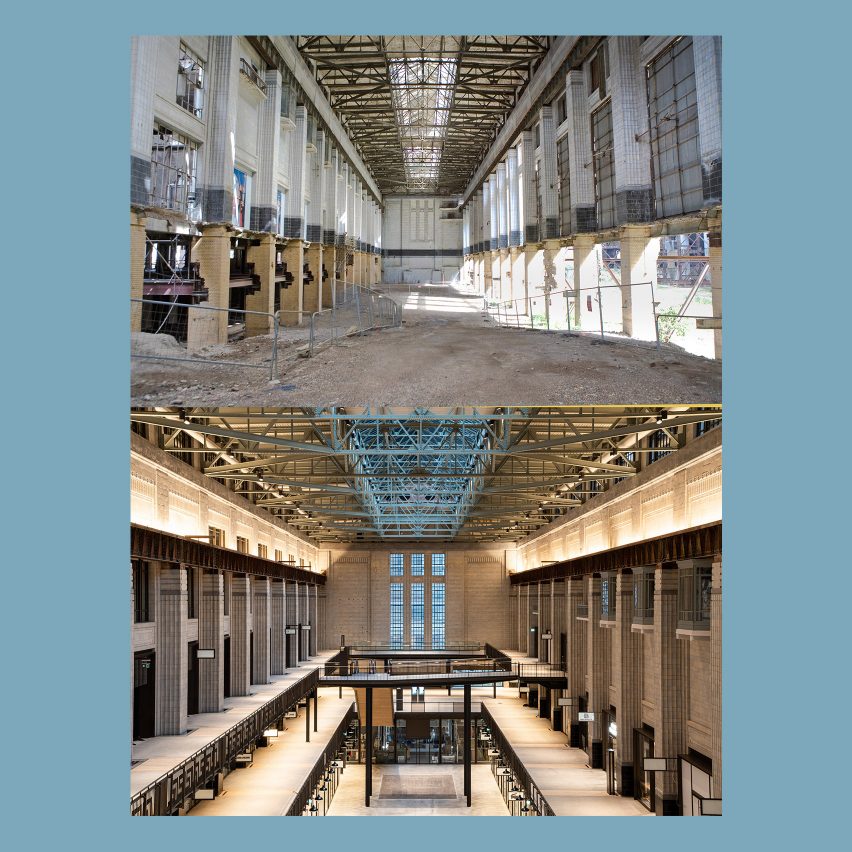 Battersea Power Station reopens tomorrow after a long-awaited redevelopment. This series of before and after photos show the rejuvenated building alongside historic pictures of it in use and as a ruin.

Designed by British architect Giles Gilbert Scott the building, which opened as a power station in the 1930s, now contains over 100 shops, 46,000 square metres of office space and 254 apartments.

The building was decommissioned between 1975 and 1983 and remained empty for almost 30 years before being purchased by Malaysian developers SP Setia and Sime Darby Property in 2012.

UK architecture studio WilkinsonEyre redesigned the former power station, which will officially open to the public on 14 October.

A shopping centre containing shops, cafes and restaurants occupies the lower floors of the building, with both the former turbine halls converted into multi-level shopping arcades.

The 1930s Turbine Hall A is lit from a rebuilt skylight, while the extraction fans in the 1950s Turbine Hall B have been replaced with light tunnels to provide natural light.

Alongside each of the turbine halls the control rooms, which are some of the most iconic spaces in the building, have been restored as part of the redevelopment.

The 1930 Control Room A was converted into an events space, which will be regularly opened to the public.

Above the shopping levels, the building’s central boiler house was converted into office space, which will be occupied by technology company Apple.

In total 254 apartments were located within the existing structure, as well as in a series and penthouses placed on top of the central building and in both switch houses on either side of the main structure.

As part of the redevelopment, the building’s chimneys have all been rebuilt with one of the four turned into a visitor attraction.

Set to open later this year, the attraction will have a glass lift that rises through the chimney to give views across London.

The Battersea Power Station site was developed after remaining empty for 30 years after numerous failed proposals that included turning it into a roller coaster and a stadium for Chelsea football club.

It now forms part of a wider development that has seen buildings completed by Foster + Partners and Gehry and Partners and when complete will contain over 4,000 homes. It has been criticised for only having nine per cent affordable housing, which is well below the 15 per cent originally agreed upon when the development began.

The post Before and after photos reveal extent of Battersea Power Station redevelopment appeared first on Dezeen.