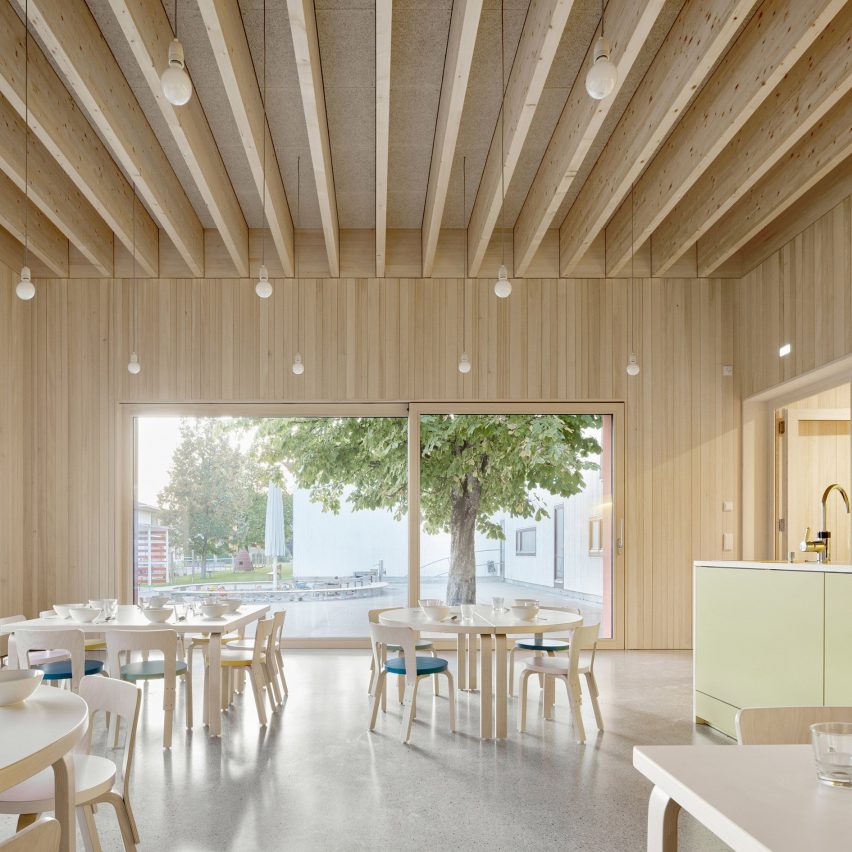 Bregenz-based studio Bernardo Bader Architekten has completed a timber extension to Kindergarten Am Schlatt in Lustenau, Austria, with dark red window frames that reference the colour of the main building.

Bernardo Bader Architekten added space for three more groups of children to the existing single-storey nursery and improved the connection between the classrooms and gardens with a series of external decks.

Designed to align with the existing building while still being distinctive, the extension connects to the kindergarten via a long, timber-clad corridor that runs the full length of the new building’s northern edge.

As well as providing access, this corridor doubles as a “playable” space, with storage areas and large window boxes providing seating overlooking a garden.

“The low-lying windows of the access areas create an atmospheric relationship between the interior and exterior,” said the studio.

Directly off this corridor on the building’s southern edge are rooms for three groups of 23 children each, along with bathrooms, a dining room and administration spaces.

Each of the group’s spaces consists of an internal play area as well as a larger room alongside an area of partially-covered decking onto which they open through sliding doors.

“At the heart of each group is an outdoor room at the transition to the garden, around which the group and alternative room are arranged to form a coherent functional unit,” described the studio.

These rooms benefit from high ceilings defined by wooden beams, intended to create a contrasting condition to the lower height of the corridor space.

“While the corridors and side zones are based on the existing room height, the significant elevation of the group and outside rooms creates a new spatial quality,” said the studio.

“Visible beams made of local woods and prefabricated external wall elements give the new rooms a robust, studio-like character… the existing and expansion are transformed into a new whole.”

The classrooms are finished in contrasting white timber planks. Colour has been used sparingly, most noticeably in the deep red used on the exterior of the window and door frames, which picks up on the colour of the existing kindergarten.

To animate the elevations, the cladding of silver fir battens has been applied in alternating horizontal and vertical areas, helping to break up the low, long form.

Bernardo Bader Architekten often incorporates wood in its designs, including for a larch-clad home in the Swiss alps that reinterprets a traditional chalet.