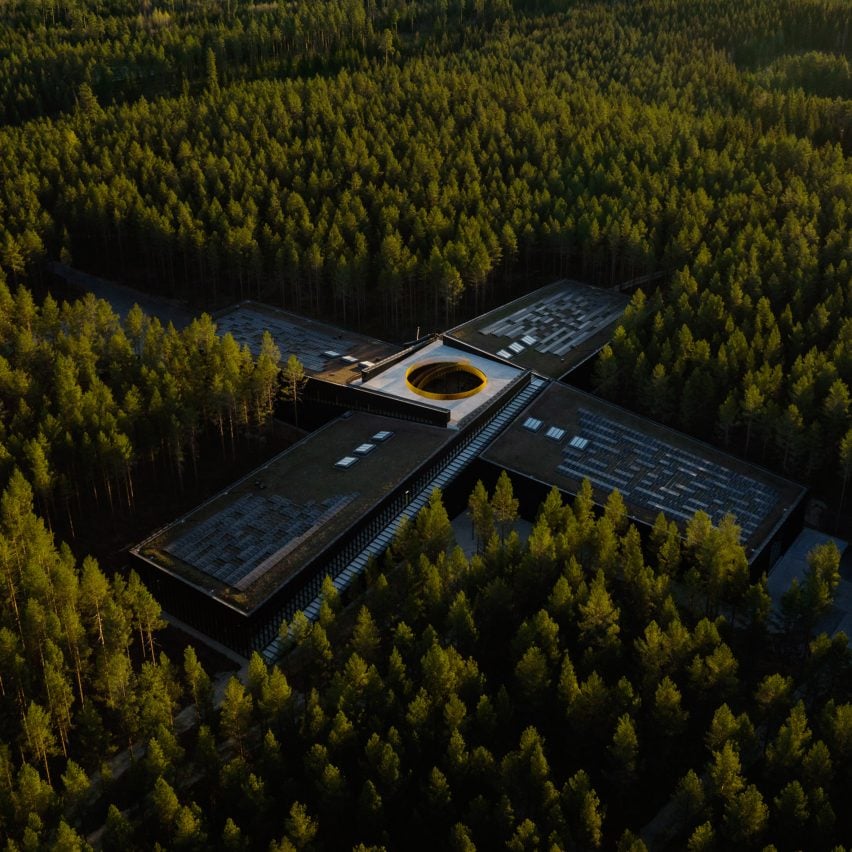 Architecture firm BIG has constructed a mass-timber Passivhaus factory in a Norwegian forest for outdoor furnituremaker Vestre, which features a green roof and solar panels as well as an exterior slide.

Instead of being hidden away on an industrial estate, The Plus factory development is nestled in 300 acres of woodland near the village of Magnor on the Swedish border.

The cross-shaped building consists of four double-height wings, each housing a different stage of Vestre‘s production process and radiating out from a central office area with an internal courtyard at its heart.

Constructed in just 18 months, the 7,500-square-metre factory is made mostly from wood and stores 1,400 tons of carbon dioxide in its structure made of PEFC-certified cross-laminated timber (CLT) and glued-laminated timber (glulam), Vestre said.

The building combines energy-efficient Passivhaus strategies with a streamlined, robot-assisted production line, which Vestre says reduces its energy consumption by 90 per cent compared to a conventional factory.

Its energy and heating demands will be partly met with the help of 900 rooftop solar panels, 17 geothermal wells and heat pumps hidden behind the walls to capture excess heat from the production process.

Taken together, Vestre says this makes The Plus the “world’s most environmentally friendly furniture factory”.

The company claims the project is “Paris-proof” – in line with global targets set out in the Paris Agreement to halve emissions by 2030.

However, The Plus falls short of achieving net-zero emissions, which every building both old and new would have to reach by 2050 to help limit global warming to 1.5 degrees Celsius in accordance with the treaty.

Instead, the project is reportedly on track to become the first industrial building in the Nordic countries to reach the highest rating in the BREEAM environmental certification scheme, which is only awarded to the top one per cent of projects.

“There are no industrial buildings that have even come close to the highest standard, not even the second-highest,” BIG design lead Viktoria Millentrup told Dezeen. “So BREEAM-wise, there was not even an example building we could follow.”

“It’s untraditional for a factory to focus so much on sustainability,” agreed lead architect David Zahle. “For a lot of companies, production is about keeping costs low and hiding it away.”

In comparison, the interior of The Plus is laid bare by huge windows running up its charred-larch facade and by the glazed courtyard punctuating its centre, both of which are accessible to the public using huge exterior staircases.

In this way, Vestre says The Plus is meant to bring ideas about more sustainable building and production methods to the general public and “build a bridge between the Greta Thunberg generation and industrialists”.

“The project is very transparent, almost open-source both in terms of how the products are made but also in how we’ve opened up the facade to bring people closer,” Zahle said.

Each of the Plus’s four wings is topped with green roofs grown from seeds that were collected from the surrounding forest and solar panels that together will produce 250,000 kilowatt-hours of renewable energy a year.

Underneath, the roofs are held up by giant glulam girders spanning up to 14 metres and weighing up to five tons, bent into a double-curved structure using “long screws and a lot of force”, according to Magnus Holm Andersen, project manager at timber supplier Woodcon. 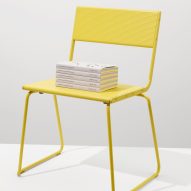 “As far as we know, this has never been done before,” he added.

From the central roof, visitors can take a yellow spiral staircase down past glazed office spaces and into the internal courtyard, which is supported by recycled reinforced steel beams and centred on a lone Norwegian maple tree.

Alternatively, a 14-metre long slide – reportedly Norway‘s tallest – winds its way around the side of the building and back down onto the forest floor.

The square roof above the office area is one of only two concrete elements in the building alongside the foundation, both made from a mixture of high-strength and low-carbon concrete to minimise emissions and material use.

On the inside, the factory is clad in light pinewood that stands in stark contrast to the exterior’s charred black finish.

Each of the four wings – housing Vestre’s woodwork and powder-coating workshops, as well as a warehouse and an assembly station – features colour-coded equipment and flow-chart-style floor markings designed to help visitors follow the production process from above.

The production line itself combines efficient machinery and artificial intelligence, which Vestre says helps it to “manufacture faster, greener and less expensively”.

In the colour workshop, for example, two industrial robots named after Norway’s first female engineers are powder-coating metal components using AI and object recognition, and are capable of changing colours in seconds rather than minutes.

A technical corridor hidden behind the walls of each wing houses waste products from the manufacturing process that are recycled for reuse.

Here, the water needed for washing metal components is cleaned and filtered so that 90 per cent of it can be cycled back into the process, while wood chips and sawdust are collected and sent off to a biomass power plant to be burned for electricity.

Meanwhile, heat pumps capture excess energy from the process of drying the components and convert it into heat that is then fed back into the production line and used to warm the building.

“Since there’s one owner, it’s easy to do that,” said project manager Jan Myrlund. “Normally, one company owns the plant and another the inside and they deliver their own systems.”

Reducing waste and emissions was also a key consideration in the construction phase, with all equipment powered either by electricity or biodiesel and all felled trees reused as part of the building’s structure or stored for use in Vestre’s furniture.

The building’s footprint was deliberately rolled back to leave as many trees standing as possible and where the forest floor was removed, it was preserved and put back in so that greenery hugs the building on all but two sides.

“Normally, when we construct a building in the middle of the forest, we would take a lot more trees away,” said the project’s design manager Sindre Myrlund.

“Originally, we drew a line 10 metres away from the factory, which is more normal. And Vestre moved the line five metres in and said: if you need to remove more trees, you need to ask and get it approved.”

Vestre has previously claimed to be the “first furniture manufacturer in the world” to declare the carbon footprint of all its products.

These figures were prominently displayed on the brand’s award-winning stand at the 2020 Stockholm Furniture & Light Fair, which was later disassembled and reused to form an installation at Milan design week.

The photography is by Einar Aslaksen.