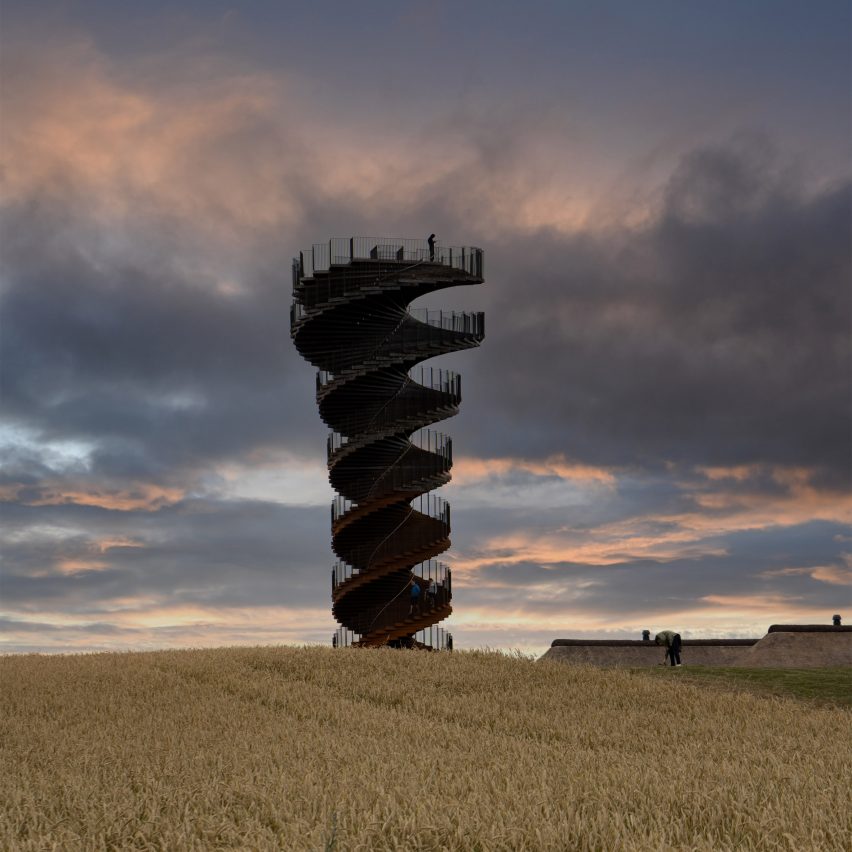 The first photos of the recently opened Marsk Watchtower in Denmark designed by architecture studio BIG have been unveiled.

Created to attract tourists to the area, the 25-metre-high viewing tower within the Wadden Sea National Park has a double helix structure.

It recently opened at the Marsk Camp, which is surrounded by UNESCO World Heritage-listed marshland in southwestern Denmark.

Standing alongside the campsite’s restaurant and cafe, the tower rises 25 metres to give views across the national park and out towards the North Sea.

Made from Corten steel, the tower appears to be formed almost entirely from stacked steps.

BIG designed the structure to have a double helix formation similar to that of DNA, with 146 steps on the way up and 131 on the way down.

“Marsk tower consists of a unique construction, where the design is based on nature’s twisted structure and human DNA strand,” explained Marsk Camp.

“It is both a sculpture and an observation tower and is shaped like a double helix and designed in such a way that there is only one way up and another way down.”

The tower slowly expands outwards from a seven-metre base wide to a 12-metre-wide viewing platform at its top.

A small elevator runs through the structure’s core to provide accessible access.

“When you have climbed the 146 steps and landed on the observation platform, you are standing 36 metres above sea level,” said Marsk Camp.

“This gives a completely unique perspective on the otherwise flat marsh and a fantastic view over the Wadden Sea National Park.”

Fabricated by local company Schack Trapper, the structure was made from around 300 tonnes of Corten steel.

It stands on a plinth constructed using 250 tonnes of concrete.

The tower is the latest attraction to be built in Denmark. Architecture studio EFFEKT recently designed a 45-metre-high helical tower in the Gisselfeld Klosters Forest.

Led by architect Bjarke Ingles, Danish studio BIG is one of the world’s best-known architecture studios. Other spiral informed buildings designed by the firm include The Twist art gallery in Norway and a supertall skyscraper in New York called the Spiral.

The photography is courtesy of Marsk Camp.