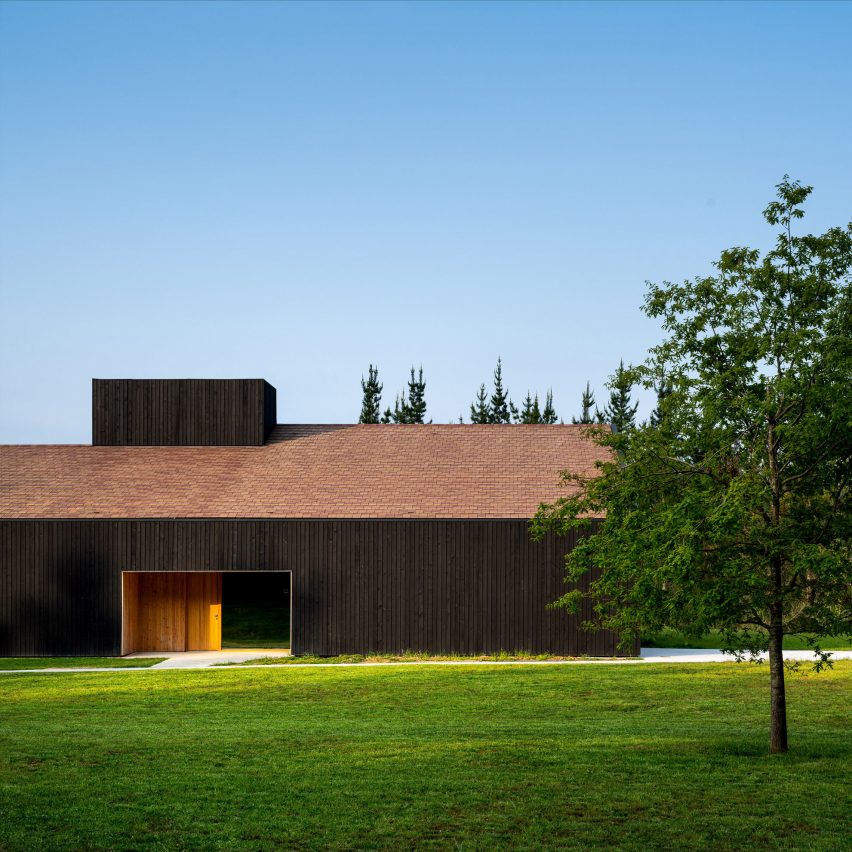 Architecture office BABELstudio has completed a timber-clad building in northern Spain containing a restaurant and an adjoining house for its chef.

Caserío Azkarraga is located on a remote hillside in the Amorebieta-Etxano region to the east of Bilbao, where BABELstudio has its offices.

The studio was commissioned to design a home for chef Fernando Gonzalez, who moved to the area from Bilbao with his wife and business partner and their three children.

The building also contains Gonzalez’s new restaurant, La Revelía, which is dedicated to regional cuisine, as well as accommodation used for an agrotourism business.

The property occupies the site of a 19th-century farmhouse and its outbuildings, which had long been abandoned and had fallen into a state of disrepair.

BABELstudio was able to retain the lower portion of the original two-storey walls, which are incorporated into a new building arranged mostly on one level.

“Building restrictions obliged us to maintain the original footprint of the building, including the annex volume,” the architects pointed out, “but allowed substantial modifications in building height, facade openings and selection of materials.”

The new property’s more compact proportions reference the region’s traditional farmhouses, while its form and materiality distinguish it as a modern addition in this historical area.

“The project’s design presents itself as a contemporary, minimalist architecture that integrates itself into the formal, volumetric aspects of its architectural context,” BABELstudio said.

The original stone walls are now wrapped in a skin of black-stained timber. The facades incorporate openings with deep reveals lined with untreated pine that contrasts with the dark surfaces.

The building’s ground floor contains the residence and the restaurant, with the smaller first floor accommodating four guest suites and a lounge area for the agrotourism business.

A concrete wall added at the centre of the ground floor combines with a system of wooden beams and joists to support the new upper floor.

The in-situ cast concrete element is used to organise the building’s programme by separating the residential spaces on one side from the restaurant on the other.

The main living area occupies a double-height space featuring three large openings with sliding doors that connect this open-plan room to the garden.

A main bedroom suite and two single bedrooms are located in a separate volume that extends from one side of the building. This single-storey element is topped with a terrace for use by guests staying on the first floor.

The house’s interior features white walls and a pared-back material palette that contrasts with the darker tones and finishes used in the restaurant.

Three large openings surrounding the restaurant’s dining area immerse guests in the natural surroundings, which include a garden for growing ingredients used in the cooking.

The kitchen is separated from the dining space by a custom-made glass screen set atop a marble base that allows diners to see the chef preparing their food.

Black-stained timber has been used for other residential buildings, like Danish architecture studio Norm Architects’ Fjord Boat House in Denmark.

The photography is by Biderbost Photo.

The post Caserío Azkarraga is a restaurant and residence wrapped in blackened timber appeared first on Dezeen.