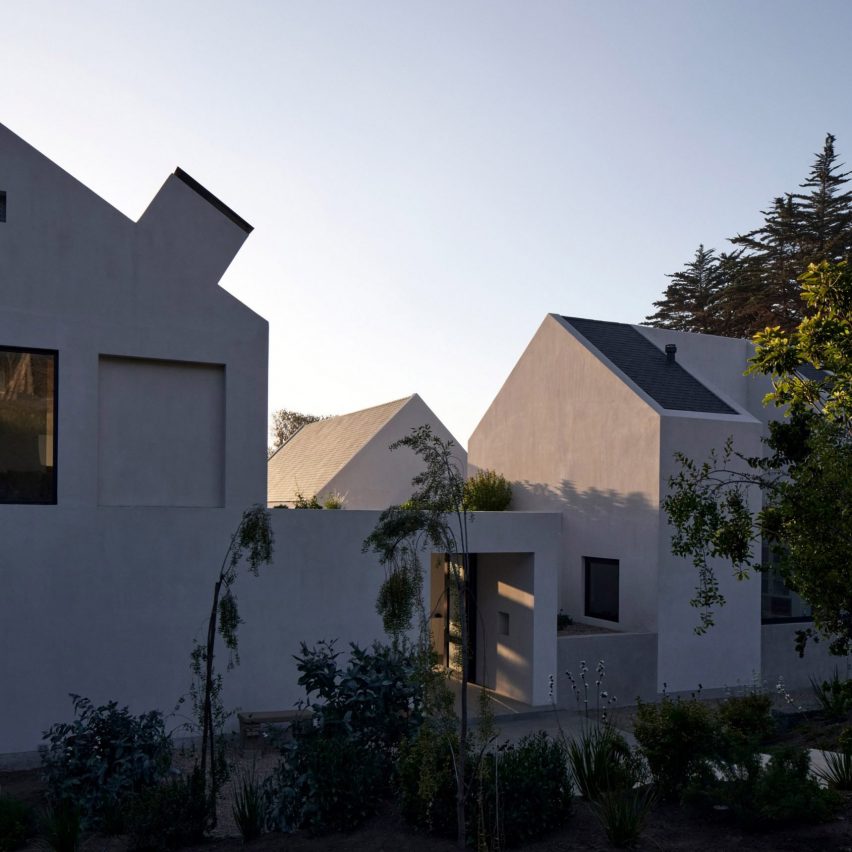 The 460-square-metre home is located in El Pangue, roughly two hours north of the capital Santiago.

“This weekend house was designed to reveal and heighten its specific context and benefit from the gentle Mediterranean climate that the central Pacific coast of Chile offers,” said architecture studio Combeau Arquitectura.

It was completed in 2021, and built on a steep site that does not have direct waterfront access. Felipe Combeau of Combeau Arquitectura worked with his wife, Andrea Murtagh, who is also an architect, on the design.

To make the most of the lot’s limitations, the architecture studio opted to organize the home’s different areas around a central courtyard.

According to the team, this avoids “the standard two-dimensional ocean-view-driven layout.”

The gabled volumes have simple lines and are rendered in white lime stucco.

Large panes of glass fill the unadorned openings, and concealed gutters in the thickness of the wall lend the home a polished appearance.

The roofs are covered in shingles to create a monochrome palette for the exterior.

Although the three main volumes have gabled roofs, they are pitched at different angles, giving each one a distinct appearance.

“The three buildings are organized around a clear centre: a 7×7 m courtyard surrounded by an ambulatory corridor,” said the design team.

“Together, they form a ‘connection core’ allowing different ways to circulate and cross indoor-outdoor spaces,” the team added.

The largest of the three volumes contains an expansive living and dining room flanked by windows on all sides.

These allow for cross-ventilation and open onto a terrace for dining outdoors. Since there is no upper floor in this volume, the architects left the roof’s timber rafters exposed, creating a much taller space.

In a nearby, smaller volume, the kitchen occupies the ground floor. Upstairs, a bunk room can accommodate several children.

The third volume contains the rest of the home’s bedrooms. There are three on the ground floor, in addition to the primary suite upstairs. Since it’s elevated above the rest of the home, this room has views of the Pacific over the surrounding treetops. 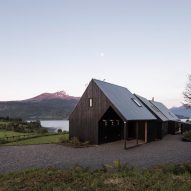 “The result of this building arrangement is a calm and sober house with many inviting places for a big family life,” the team said.

Locally sourced granite floors run throughout the house, including in the circulation corridor around the courtyard, and in outdoor terraces and patios.

“The entire perimeter of the house becomes a sequence of active outdoor spaces like terraces, courtyards, arrival, and pathways,” said Combeau and Murtagh.

The interior palette is reminiscent of a beach home, with wooden accents used for furniture, built-in cabinets and doors.

“A timeless and strict aesthetic approach was pursued to resist coastal erosion as well as architectural trends,” said Combeau and Murtagh.

Other residences that make the most of Chile’s long coastline include a wood-and-concrete home by Juan Pablo Ureta and an angular cabin by 2DM Arquitectos.

The photography is by Cristóbal Palma