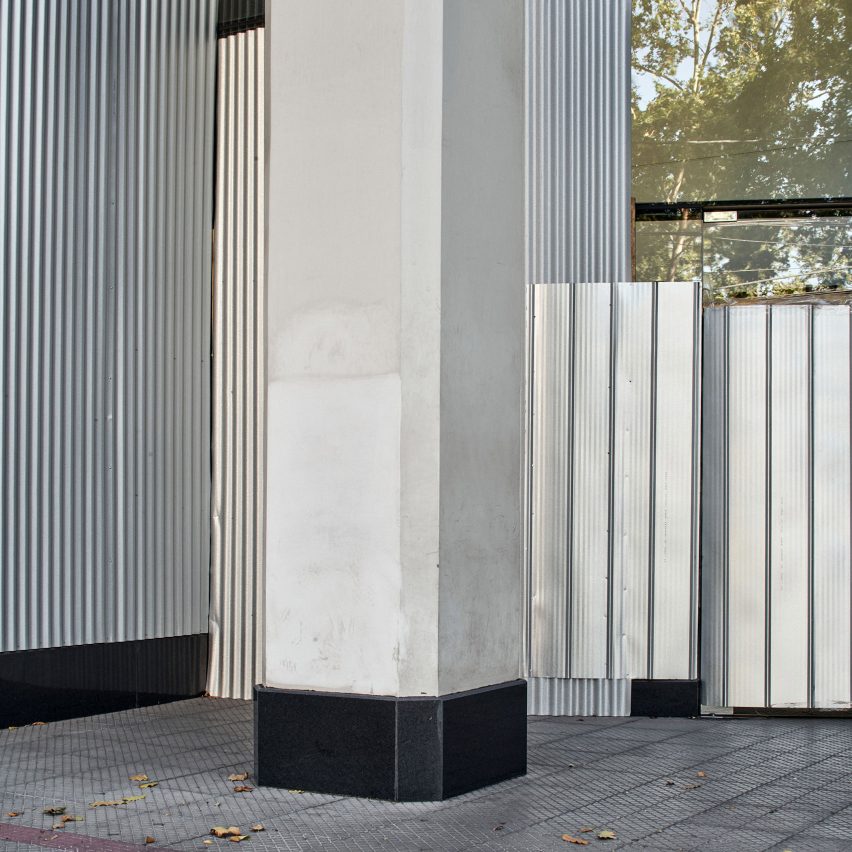 Architecture photographer Cristobal Palma captures an atmosphere of “paranoia” with shots of the boarded-up streets in Santiago‘s wealthy areas during the recent protests.

Palma‘s photographs frame shops and banks in the capital of Chile with their lower levels covered by metal hoardings last year.

According to Palma these buildings were never truly at risk, but he was interested in the symbolism of how parts of the city away from the main protest areas looked during the protracted period of unrest from the end of 2019 through most of 2020.

“The architecture of some of the more busy areas of the city started to change, to interact with what was going on,” he told Dezeen.

“Many facades started to get clumsily boarded up in some more affluent parts of town, which the riots actually never reached,” he added.

Most of the boarded-up buildings that Palma photographed were built in the 1990s and 2000s, after Chile’s “miracle years” where the country’s economy boomed.

“Though at first this was meant to be a temporary condition, it started to feel more permanent, and became a reflection of how most of our architecture is not really prepared to interact with politics at this scale and intensity,” said the photographer.

“This generic architecture became a kind of unintended message of paranoia and ineptitude mirroring how the political class was also reacting.”

His photo series aims to underline that much of the civil unrest was non-violent as people took to the streets to protest peacefully against raises to the Santiago Metro’s fares, government corruption, the cost of living and widespread inequality that has been building for decades.

“Here in Santiago, we had massive peaceful demonstrations all over the city, spontaneous street carnivals,” the photographer told Dezeen.

The photographer hopes that the shots of untouched buildings offer an alternative view of events that were typically characterised in the global media by shots of violent clashes between citizens and the police and military.

“There were some riots and looting in the periphery, as well as some violent demonstrations in parts of the city centre that became somehow ritualistic,” said Palma,

“Every Friday a bunch of people would gather in what is considered a kind of centre-point dividing Santiago symbolically in two, between the poor part and the rich one, to demonstrate,” he added.

“Usually these demonstrations would end up being a confrontation between the people and the police in a kind of choreography of violence.”

The protests lasted from October 2019 to a referendum in November 2020, but it was the these violent clashes that came to define the period of civil unrest in the eyes of the world.

“In situations such as the one we had in Santiago, a kind of violence pornography does overtake most of the way events are communicated,” said Palma.

“Some of this imagery is intended to inform, some to celebrate, but here at least, it was mostly to get people scared of what was happening and to overshadow the actual political and social events that were taking place,” he told Dezeen.

“The whole event is much more complex than just some people throwing petrol bombs at the police,” said Palma. “It’s full of contradictions and subtleties.”

Palma said he didn’t face many obstructions while taking the shots for his series apart from the odd security guard, but he remained wary.

“In Chile, the people you really have to fear are the police, who have become totally unhinged since the start of the social outbreak,” he said. “But as I tended to do this work away from the demonstrations, usually on quiet days, I never really felt unsafe.”

Palma was born in the UK but grew up in Santiago from the age of three. He lived in London for over a decade in the 1990s before returning to Chile 12 years ago. He usually photographs private architecture projects around Chile and his shots are often featured on Dezeen.

Although the protests are over, tensions are still simmering in Santiago as the city enters a full lockdown due to the coronavirus pandemic.

“The government just fenced off the square where people used to gather every Friday to demonstrate with a metal structure,” Palma said.

“Although the vaccination program that started recently has so far been a success, throughout last year the lockdowns and sanitary problems only served to exacerbate all the structural shortcomings of a city built according to the neoliberal paradigm over the last 40 years.”

Photography is by Cristobal Palma.