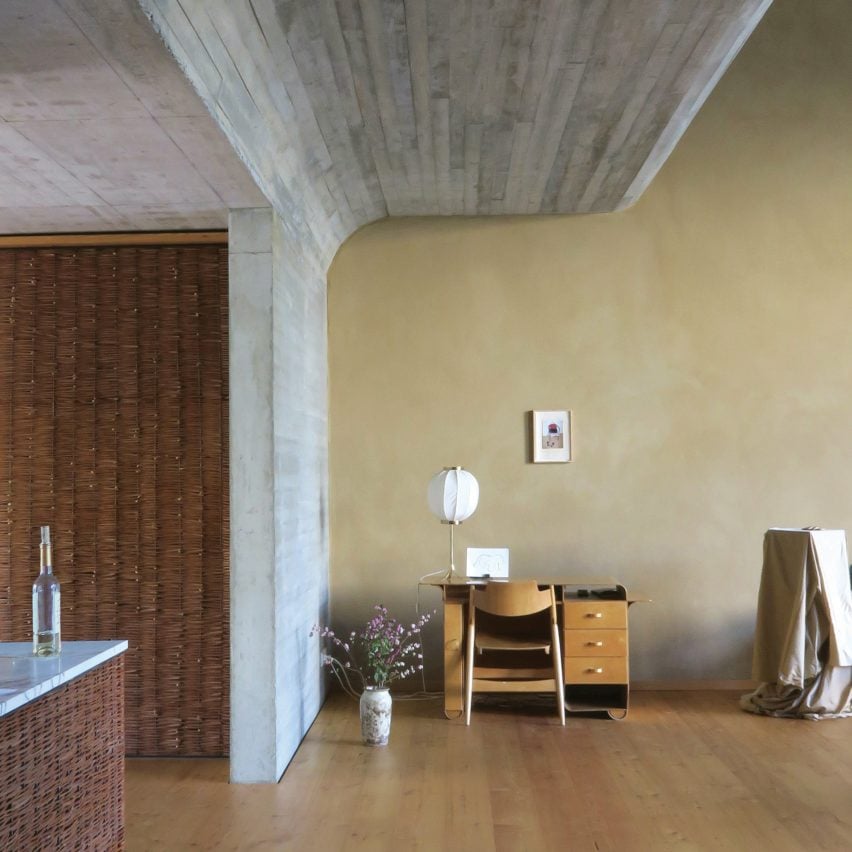 German architect Philipp von Matt has incorporated a skylit studio and a ground floor exhibition space into this artist’s home in Berlin.

Located in the city’s central Mitte district, the O12 house belongs to a French artist and is described by Von Matt as “a hybrid of artwork and architecture that responds to the critical challenge of balancing professional and private life”.

The 670-square-metre house is divided into three floors. Its plaster-rendered exterior is designed to blend in with the surrounding architecture, punctuated by various different sizes and styles of windows alongside a garage door at ground level.

A raw concrete corridor and open staircase with a brass mesh bannister zigzags up the side of the building from the front door to the first and second floors.

The way that light filters down in shafts from above is intended to evoke the drawings of classical Italian architect and artist Giovanni Battista Piranesi.

“I am fascinated by the friction between the ordinary and the remarkable and I like the quality of creating something ordinary because it is not easy to achieve,” explained Von Matt.

“Like that feeling of comfort when you enter an old building that has been standing for hundreds of years.”

The ground floor hosts the house’s more public spaces including a gallery and an exhibition space with a courtyard garden. The rest of the rooms unfold along the stairway with larger double-height rooms opening up to views on the west and more intimate spaces including the bedrooms and bathrooms to the east.

The first-floor hosts a kitchen that merges into a dramatic double-height living room via an undulating wall of curved reinforced concrete.

A triangular fireplace that sits at one end of the room was designed to recall the Pyramid of Cestius in Rome as well as Antonio Canova’s tomb in Venice.

The house’s top floor is exclusively occupied by the artist’s atelier.

“Natural light plays a central role as it influences the shift in atmosphere, with open, light-flooded rooms and more intimate, warmly lit ones,” said the architect.

The studio features a large skylight that lends the room the appearance of an open-air studio.

“The skylight engages in a whispered visual dialogue with the nearby industrial buildings in a continuous fluctuation between interior and exterior, concentration and contemplation,” he explained.

“The studio is the most secret and intimate space, yet one that also invites external impulses. In fact, the room’s only window frames Berlin’s landmarks such as the TV tower, expanding the private horizon into the urban environment.”

Colours and materials were selected to amplify the natural light. The rooms dedicated to art are rendered delicate, neutral hues while the living spaces become increasingly warm and inviting.

The studio deliberately paired contrasting and unexpected materials such as industrial concrete and steel with wood, clay plaster, terracotta, ceramics and wicker.

Dezeen has rounded up a selection of artist’s houses that double as gallery spaces, which includes a garden shed for making and displaying sculptures and a showroom for a Japanese landscape architect with its own rock garden.