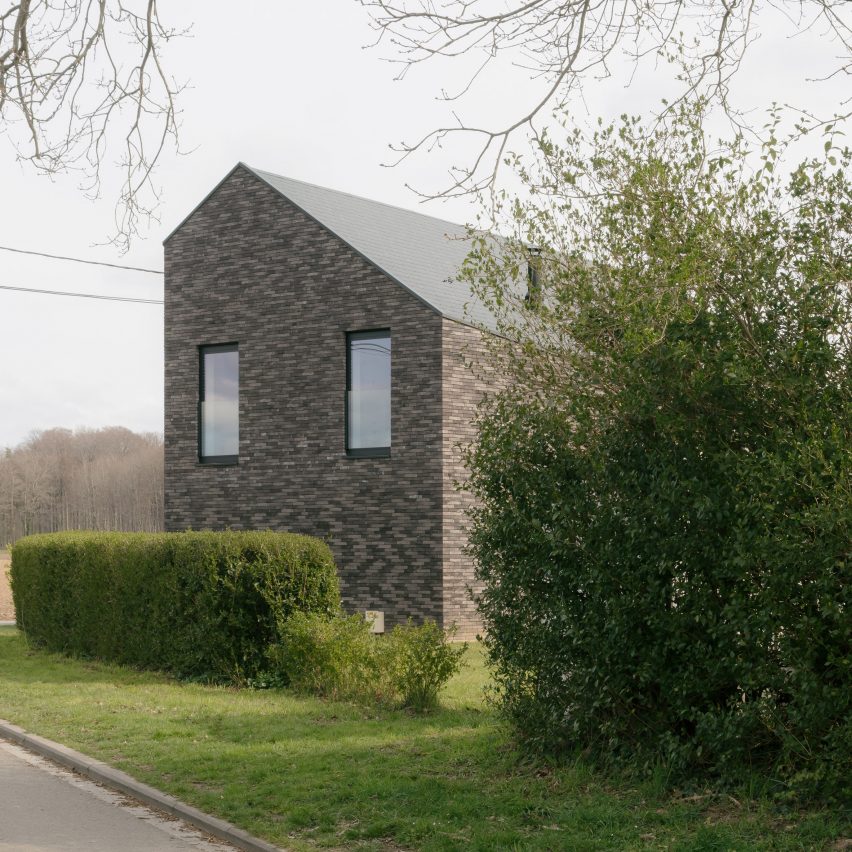 Located in Nethen to the east of Brussels, the home was created for a family on a corner plot between the village and a nearby area of woodland.

This dual condition informed the organisation and shape of the home, which DéDal Architectes said “closes” and “expands” depending on its orientation and views.

“Both the particular configuration of the site and the peri-urban stylistic context of 1960s housing led us to question the meaning of integrated architecture,” explained the studio.

“Between mimicry, reference and rupture, this project proposes to take advantage of the constraints but also of the potential of the environment,” DéDal Architectes continued.

“The architectural response wants to be both anchored in its physical and cultural environment but also singularly in rupture with them.”

The home is split across two floors and into three sections, planned around a double-height living area at its centre that sits beneath a steeply sloping section of the roof.

Overlooked by a glazed balcony on the floor above, the central space is flanked by a kitchen-diner and study on the ground floor and by the main bedroom and two smaller bedrooms on the first floor. 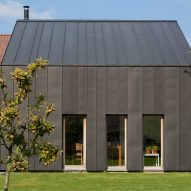 “The tripartite composition of the house organises the entire programme around the core of circulation and a void, accentuating the visual connections between the day and night areas,” said the studio.

DéDal Architectes designed the form of the home to sweep upwards to open up the bedrooms areas, and downwards towards the bathrooms and the plywood-lined circulation and storage space at the home’s centre.

Large windows are positioned to capture views of the village and woodland on either side, and a glazed corner in the living room opens onto an outdoor seating area.

Rather than separate the downstairs areas with walls, they are demarcated by their differing heights and contrasting material finishes, such as wooden ceilings in the study and deep green cupboards and counters in the kitchen.

“Despite the apparent plan openness, each space is defined and has its own identity ensured by variations in heights, views and materials,” said the practice.

Many studios working in Belgium respond to its typical domestic architecture with contemporary interpretations.

In Flanders, Veld clad a blacksmith’s workshop in black metal and connected it to a 1950s home and Atelier Tom Vanhee added a pair of gabled wooden extensions to a brick farmhouse.

The photography is by Stijn Bollaert.