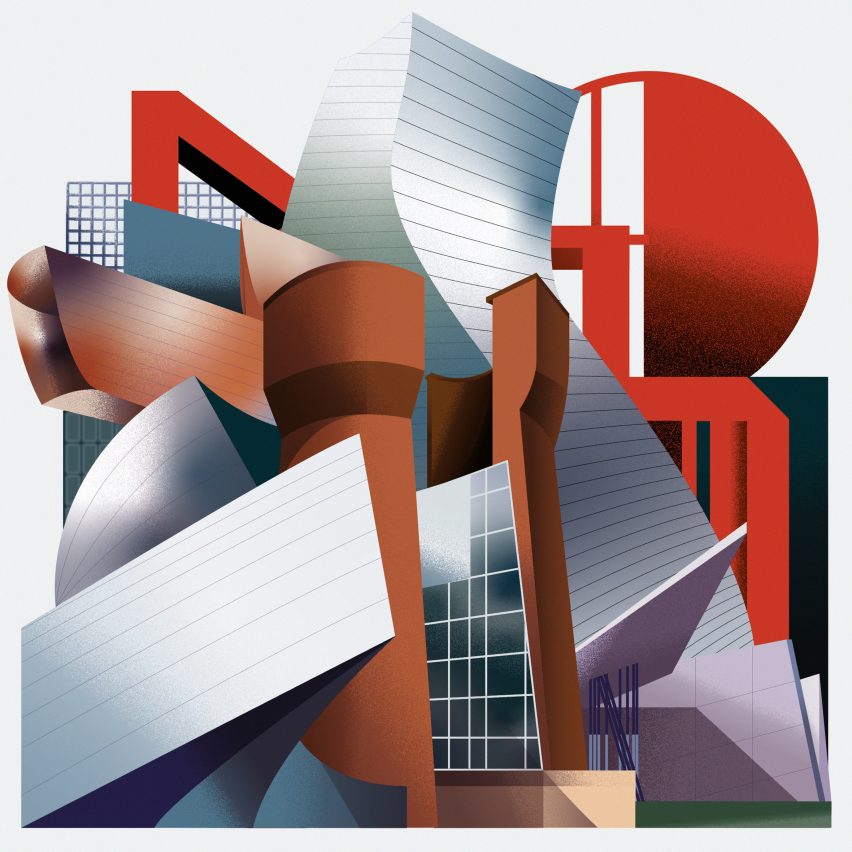 To conclude our deconstructivism architecture series, we round up everything you need to know about the movement from A to Z.

A is for Architecture Must Burn

Architecture studio Coop Himmelb(l)au coined the phrase Architecture Must Burn, which expressed their desire to radically rethink architecture, as part of its Blazing Wing installation (pictured) in 1980 in Graz, Austria.

“Architecture Must Burn was, as far as I am concerned, what deconstructivism was all about,” said critic Aaron Betsky in an opinion piece on Dezeen. “I used the phrase for a book I wrote and believed, at least for a while, that architecture could burn.”

The phrase expresses the idea that the emerging architects, who would develop deconstructivism, wanted to entirely rethink the existing rules of architecture.

B is for Bernard Tschumi

French-Swiss architect Bernard Tschumi was one of the seven architects featured in the Museum of Modern Art’s (MoMA) seminal Deconstructivist Architecture exhibition. He designed the Parc de la Villette in Paris, which he describes as the “largest deconstructed building in the world”.

In an interview with Dezeen, he said that the legacy of deconstructivism “makes me want to retreat to the back of the room”.

C is for CCTV Headquarters

Designed by Rem Koolhaas‘ studio OMA, the CCTV building is a distinctive deconstructivist building in Beijing that completed in 2012 and redefined the idea of a skyscraper.

Located on a prominent site on Beijing’s Chang’an Avenue, the 54-storey tower is known locally as “big pants” due to its distinctive shape.

The iconic Walt Disney Concert Hall designed by Canadian-American architect Frank Gehry is one of the world’s most distinctive deconstructivist buildings.

Located in Downtown Los Angeles, the building is covered in swooping metal-clad panels that echo the form of the giant auditorium below.

E is for Peter Eisenman

Another of the seven architects featured in the MoMA exhibition, US architect Peter Eisenman designed significant deconstructivist buildings including the Wexner Center for the Arts and the Memorial to the Murdered Jews of Europe.

Speaking to Dezeen about the legacy of the style, Eisenman said that its biggest impact was that it “killed off postmodernism”.

F is for Frank Gehry

G is for Guggenheim Museum Bilbao

The titanium-clad building shares a similar aesthetic to the Walt Disney Concert Hall in Los Angeles, which was designed by Gehry around the same time.

It was described by legendary American architect Philip Johnson as “the greatest building of our time”.

H is for Gehry House

An early example of deconstructivism, the Gehry House in Santa Monica, which was initially extended in 1978, was included in the seminal MoMA exhibition on the style.

“The force of the house comes from the sense that the additions were not imported to the site but emerged from the inside of the house,” said Mark Wigley in the exhibition’s catalogue. “It is as if the house had always harbored these twisted shapes within it.”

I is for Imperial War Museum North

Opened in 2002, the aluminium-clad Imperial War Museum North in the UK is one of deconstructivist architect Daniel Libeskind‘s key works.

Located on the Manchester Ship Canal, the building consists of three elements that were envisioned as parts of a globe that had shattered into fragments and then reassembled.

J is for Jewish Museum

Described by its architect Libeskind as being a “foreboding experience”, the Jewish Museum in Berlin was one of the architect’s first completed buildings.

The zigzagging titanium-zinc-clad building, which opened in 2001, was an extension to an 18th-century courthouse that originally contained the museum.

K is for Rem Koolhaas

Dutch architect Koolhaas, who is the driving force behind architectural powerhouse OMA, was another architect who was included in the Deconstructivist Architecture exhibition at MoMA.

With OMA, he was responsible for deconstructivist buildings such as the CCTV Headquarters and the Seattle Central Library.

L is for Daniel Libeskind

Polish-American architect Libeskind was one of the seven architects featured in the seminal MoMA exhibition, even though he had completed no buildings at the time.

One of his first built works was the Jewish Museum in Berlin, which is one of deconstructivism’s most evocative buildings.

M is for Mark Wigley

“I was pointing to certain things going on in their work that I thought might disrupt the discourse,” Wigley told Dezeen. “The main purpose of that show was to produce a disruption.”

Wigley, who gained his PhD from the University of Auckland, taught at Princeton University and was dean of Columbia University’s Graduate School of Architecture, Planning and Preservation for a decade. He founded Volume Magazine with architect Koolhaas and Dutch-German historian Ole Bouman in 2015.

N is for New York by Gehry

The 2011 New York by Gehry skyscraper has a rippling stainless steel exterior that is typical of the architect’s signature style.

At the time of its completion, the 265-metre-high tower was the tallest residential building in New York.

O is for Royal Ontario Museum

Named the Crystal, Libeskind’s dramatic 2007 extension to the Royal Ontario Museum in Toronto, Canada, has many of the signature design features of deconstructivism including jagged forms and irregularly placed windows.

The extension consists of five intersecting metal-clad volumes that were informed by crystals.

P is for Parc de Villette

One of the movement’s earliest and most influential projects is the 1987 Parc de Villette in Paris, which was included in the MoMA exhibition and designed by French-Swiss architect Tschumi.

“I call it the largest deconstructed building in the world as it’s one building, but broken down in many fragments,” Tschumi told Dezeen.

Q is for JacQues Derrida

Deconstructivism incorporated many of philosopher Jacques Derrida’s ideas and theories. Derrida was an Algerian-born French philosopher who published more than 40 books and taught at the University of California, Irvine, and was a visiting professor at numerous institutions including Johns Hopkins University and Yale University.

R is for Rooftop Remodeling Falkestrass

Another project featured in the MoMA show was the 1988 rooftop extension to a lawyer’s office in Vienna, which was one of the earliest completed deconstructionist buildings.

According to Coop Himmelb(l)au co-founder Wolf Prix, who designed the building, it ignored many of the area’s planning regulations.

“At this time in this area it was not allowed to change the roofline or the material – was nothing allowed,” he said. “So we broke every rule.”

S is for Seattle Central Library

A key work designed by Koolhaas’ studio OMA is the deconstructivist Seattle Central Library, which was completed in 2003.

The library’s various functions are contained on five floors separated by four “in-between” spaces that are all wrapped in a glazed skin.

T is for The Peak

Architect Zaha Hadid‘s contribution to the seminal MoMA show, The Peak was the winning entry into a high-profile architectural competition in 1982 to design a private club perched in the hills above Hong Kong.

Described as a “horizontal skyscraper”, the club would have been constructed from shard-like fragments within an artificial cliffscape carved into the rock, but it was never built.

U is for UFA Cinema Center

Completed in 1998, the building consists of a giant glass crystal containing a foyer filled with stairs and bridges, alongside an angular concrete block containing the screens.

V is for Vitra Fire Station

W is for Wolf Prix

Prix is a founder and principal of the radical Austrian practice Coop Himmelb(l)au, which was one of the seven architects featured in the MoMA show.

The studio was responsible for some of the earliest deconstructivist buildings including the distinctive rooftop remodelling of a lawyer’s office on Falkestrasse in Vienna.

X is for eXhibition

It was curated by architects Philip Johnson and Mark Wigley, who told Dezeen in an interview that the aim of the show was “to rock the boat”.

Y is for Delirious New York

Koolhaas’ 1978 book Delirious New York aimed to set out “a retroactive manifesto for Manhattan”, showing how a generic urban grid can facilitate the depths of human fantasy and ambition.

The book contained many deconstructivist ideas that the architect would later translate into buildings.

Z is for Zaha Hadid

Described as the “queen of the curve”, the late Hadid designed buildings including the Heydar Aliyev Centre and London Aquatics Centre.

Hadid, whose The Peak private club was included in the MoMA exhibition, embraced the potential of deconstructivism and became the most successful female architect in history.

The post Dezeen's guide to deconstructivist architecture from A to Z appeared first on Dezeen.