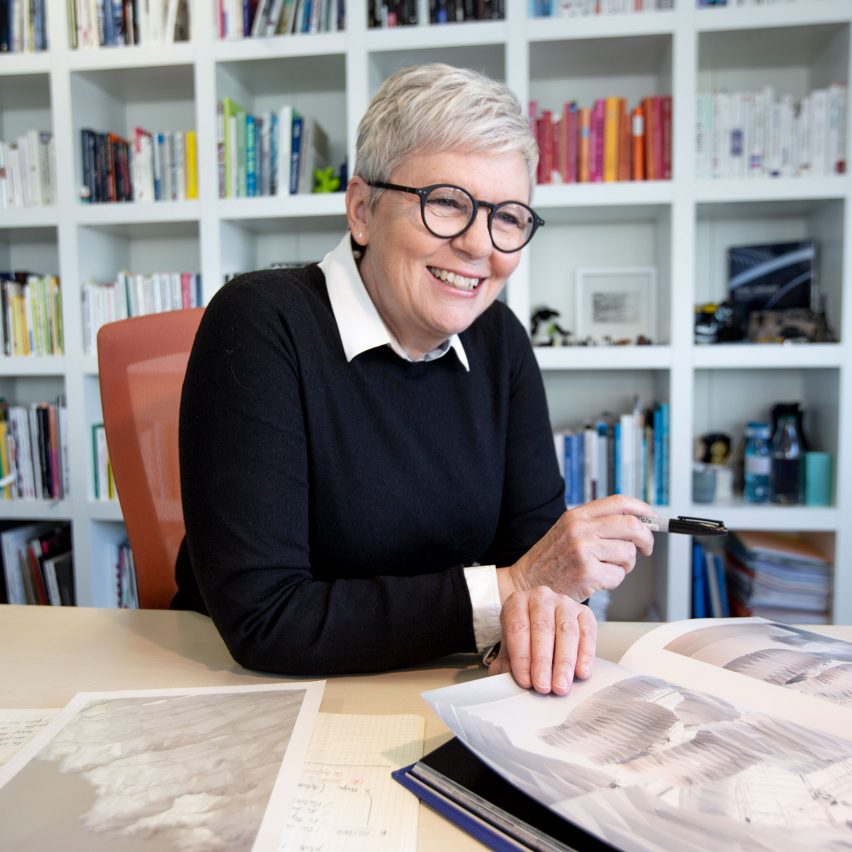 Promotion: Architecture and design are about to be revolutionised by digital twins – virtual representations of real-world products, buildings and even entire cities – according to Anne Asensio, vice president of design experience at Dassault Systèmes.

“We are at the very beginning of a huge change that may transform the way we design,” said Asensio, who spoke to Dezeen as part of our Design for Life collaboration with Dassault Systèmes.

“It’s a huge revolution for the future and we’ve only seen the first stage so far.”

Digital twins, which are also known as virtual twins, are virtual counterparts to real-world objects or processes.

Existing alongside their real-world siblings, digital twins can be used to represent a physical object or its process and to monitor what is happening in the real version as a testbed to explore the impact of proposed improvements or unexpected changes.

According to Asensio, this emerging technology will enable architects and designers to demonstrate the full life cycle of a product, a service or an experience.

It will also, she believes, enable designers to imagine and test new ideas more easily and at an earlier stage than was previously possible.

“This ability to visualise any given element in 3D – it could be an object, a service, a system or an entire city – and play with all the physical rules within the conformity of science is an incredible power,” she said.

“For designers, it is a clear access to design not just the product but its behaviour, the experience and its entire life cycle at the front end of the creative process.”

The rise of digital twins

The concept of digital twins has been around for some time. NASA was an early pioneer, building virtual models of its spaceships so it could improve their performance.

But their use has accelerated in recent years thanks to the rise of the internet of things. This has created a rich stream of data that gives an up-to-date picture of what is happening in the physical world.

A digital twin works by monitoring data generated by sensors in objects such as aerospace engines, buildings or road networks and constantly updating itself so it perfectly mirrors its sibling.

Recent examples include the Battersea Power Station project in London, where architect Foster + Partners is using a robot dog to collect data to update the digital twin; while a futuristic urban development at Innisfil in Canada by architect Partisans will feature a digital twin that will be used to optimise transportation systems including autonomous buses and drones.

However, Asensio believes the true capabilities of the technology are not being used fully, comparing its use today to how the internet was used at the start of the millennium.

“The virtual twin is going to grow quite intensively,” she said. “We can [use digital twins to] demonstrate other ways of designing a city – leveraging the participative actions of citizens through immersive co-design of the city on one hand and, on the side of professionals, redesigning buildings to be resilient to climate or extreme temperatures, or rebuilding after the learning of a simulated tsunami. There are plenty of solutions.”

A new approach to design

Construction and development company Lendlease is using the software to create digital twins for many of its projects in Europe and North America to improve efficiency.

The technology was also used to optimise the manufacture and construction of Brock Commons, a student housing block at the University of British Columbia (UBC), which was the tallest mass-timber building when it was completed in July 2017.

As Asensio explained in a recent talk with Dezeen, her ambition driving the development of these digital tools is to “shift the posture of design” by encouraging designers to focus on creating sustainable materials and processes, rather than consumer products.

Asensio believes that digital twin technology is an example of how software can become more integral to the design process, rather than simply being a presentational tool, which she hopes will equip designers with the tools they need to “build a better world”.

“Today, 3D renderings and representations are only being used to sell an idea,” she said. “We want to move from this behaviour to a behaviour where designers can systematically represent another way to do things. The virtual twin will be a place to do that.”

The future of digital twins

However, the use of digital twin technology is not yet widespread throughout the design and architecture industries.

According to Asensio, the key limitation that prevents more designers from utilising the technology is not to do with access or understanding of 3D software but rather the difficulty in capturing the data required to inform the digital model.

In order to create a useful digital twin of a complex design or system, large quantities of accurate data are required.

“A virtual twin is a replication of something, but that thing could be very complex,” Asensio said.

“It’s not a question of whether the 3D model could be complex; we know how to produce a very complex 3D model. What is difficult is controlling the model. You need to have the right people around, the right expertise and that is a challenge for designers.”

Asensio believes the answer lies in greater collaboration between designers and experts in other fields, such as scientists, academics and industry professionals, who have more experience in capturing and processing data.

By creating more connections between different disciplines, she believes we will be able to develop digital twins that draw on more diverse sources of data. Only then will we be able to fully benefit from the technology’s potential.

“Going forward, we are at a crossroad where we can imagine incredible futures,” she said. “But we have to create the environment where this is possible.”

Asensio spoke to Dezeen as part of our Design for Life partnership with Dassault Systèmes, which highlights designers who are using technology and research to build a better world.

Dassault Systèmes provides a range of 3D tools for architects via its 3DExperience platform, which it offers at a reduced cost for startups and new businesses.

“At Dassault Systèmes, we are passionate about helping companies, designers, architects and urbanists launch innovative projects with confidence,” the company said.

“We’ve developed a comprehensive offer for startups, early-stage businesses and design agencies to benefit from the entire 3DExperience platform on the cloud at an unbeatable price point.”

This article is a partnership between Dezeen and Dassault Systèmes. Find out more about Dezeen partnership content here.

The post Digital twins will lead to "a huge revolution" for designers says Anne Asensio of Dassault Systèmes appeared first on Dezeen.