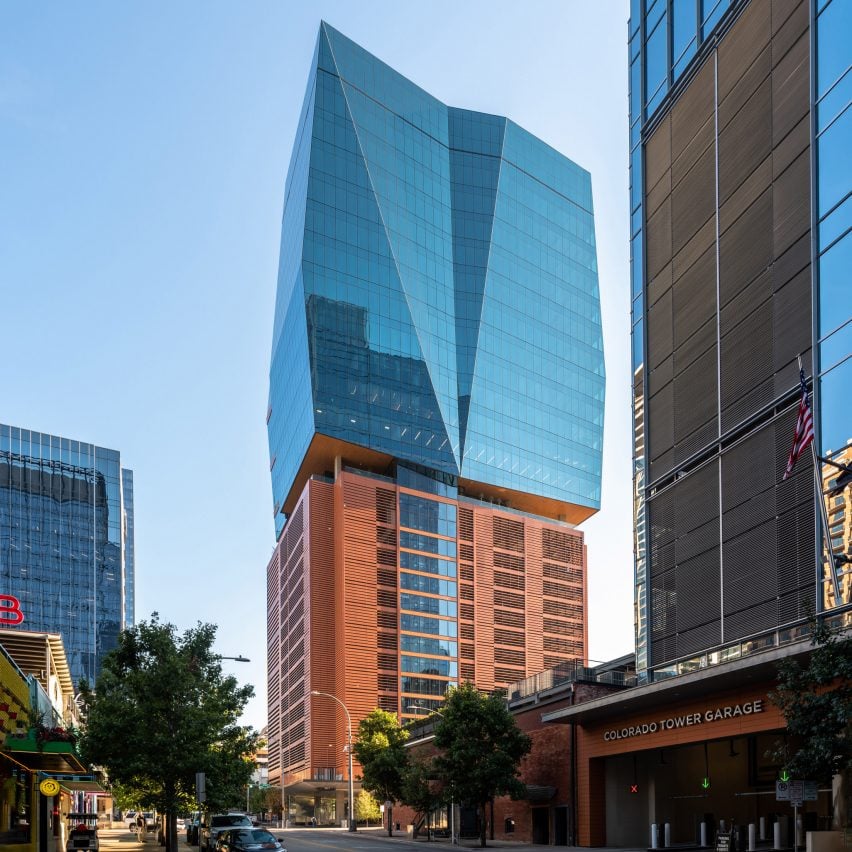 Texas architecture studio Duda Paine has created the 405 Colorado office building in Austin with a sculptural glass form that sits on top of a terracotta base.

The architecture studio was commissioned to create a parking structure, but realised that the space could be better utilised with an office element on top and was given the go-ahead by the developer.

Influenced by the work of Romanian sculptor Constantin Brâncuși, the studio decided to create the office tower as a sculptural addition to the terracotta-clad parking structure, which acts as a pedestal.

“We firmly believe that the pedestal and the sculpture that sits on top of the pedestal are one composition or one piece of art,” Duda Paine founding principal Jeffrey Paine told Dezeen.

The terracotta base was chosen to connect the palette to the historical buildings in downtown Austin.

“The reason for the terracotta color base was very much influenced by the knowledge of what’s in downtown Austin,” said Paine.

“The garage is a terracotta color, very earthbound in some ways, a good neighbor to a lot of the brick buildings in that neighborhood,” he continued.

According to principal Jay Smith, the terracotta was fabricated by artisans in Italy, with whom the studio worked closely.

“It has a time-honored tile technique that you can go back to centuries and see, but done in a new and modern way,” said Smith.

Because the 24-storey tower would not compete in height with some of the other skyscrapers in the area, Duda Paine decided to take a sculptural approach to the glass portion, which is separated from the parking garage below by a terrace on the 14th floor.

A series of concrete columns separate the glass program from the terracotta.

In order to maintain the parking functionality, the studio moved the elevator core from the centre of the building to one of the edges.

Where the glass portion faces the river, folds were introduced to maximise views for occupants and create visual appeal for onlookers.

“The idea here is to make it really separate itself from the podium so that it feels more object-like and doesn’t feel like it’s growing out of the podium itself,” said founding principal Turan Duda. 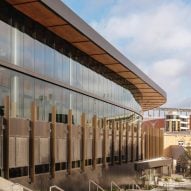 Gensler tucks arena under a wooden canopy in Austin

The glass portion is meant to reflect the clouds and show a juxtaposition between the “warm and cool” and the “handmade and the technology”, Duda added.

Inside, the lobby and public spaces of the building incorporate wood panelling that reflects the pattern of the terracotta facade.

Austin is one of the fastest-growing cities in the United States. Recently, Kohn Pedersen Fox announced the design for Waterline in the city, a supertall skyscraper that will become the tallest structure in Texas when completed.

Other recent projects in the city include an arena by US studio Gensler that is tucked under a wooden canopy.

The photography is by Leonid Furmansky.

The post Duda Paine places sculptural glass office on top of terracotta base in Austin appeared first on Dezeen.