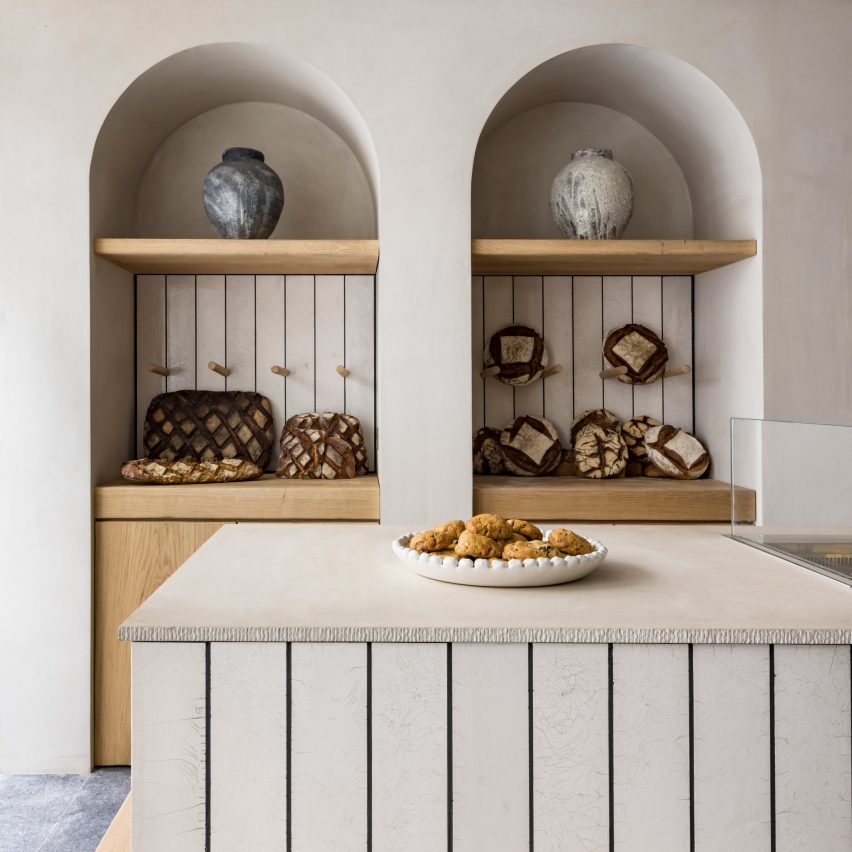 The designers aimed to create cosy interiors that would prompt visitors to stay inside for a little longer than usual while on their daily bakery round.

“I wanted to create an authentic and memorable experience, in a place of daily passage which is rather brief, as it is for buying bread,” the studio’s founder Emmanuelle Simon told Dezeen.

“The cosy atmosphere is a feeling that results from a multitude of details: natural materials, colours, the round shapes of the furniture, lighting and the arches of this bakery,” she continued.

The bakery contains a series of arched coves where customers can sit and enjoy their coffee and pastries.

Four further coves behind the main counter are used to display the selection of bread.

“Arches make the gaze travelling between the volumes and the play of light, its roundness shape is enveloping and welcoming,” Simon explained.

“You find yourself surrounded by arched, like a cloister, making the gaze travel between the play of lights and volumes,” she added.

Raku tiles – ceramic tiles that have been made using the Japanese firing technique – decorate the central island and the arched alcoves.

“I chose the Raku, a Japanese ceramic technique which uses a thermal shock to create random cracks, as it is reminiscent of bread hot out of the oven,” said Simon.

“The Raku plaques adorn the central island and the arch-shaped niches, and create a rhythmic drawing.”

Other custom details include 12 round ceiling lights made from chamotte clay and frosted glass, and the round, solid wood stools.

“The presence of solid wood, shaped by the hand of the craftsman, brings a refinement to this place made to measure,” said Simon.

The popular bakery chain already has a store in rue des Vinaigriers, Paris. This new location in Paris’ 7th arrondissement, marks part of the bakery’s expansion.

A narrow vertical opening at the back of the room allows customers to watch the baker at work as they prepare the delicacies, added to the “authenticity” of the experience.

Other minimalist bakery designs include craft bakery Sofi, which is located in Berlin. Danish architects Mathias Mentze and Alexander Vedel Ottenstein designed the bakery around an open kitchen, to allow customers to enjoy watching the bread-making process.