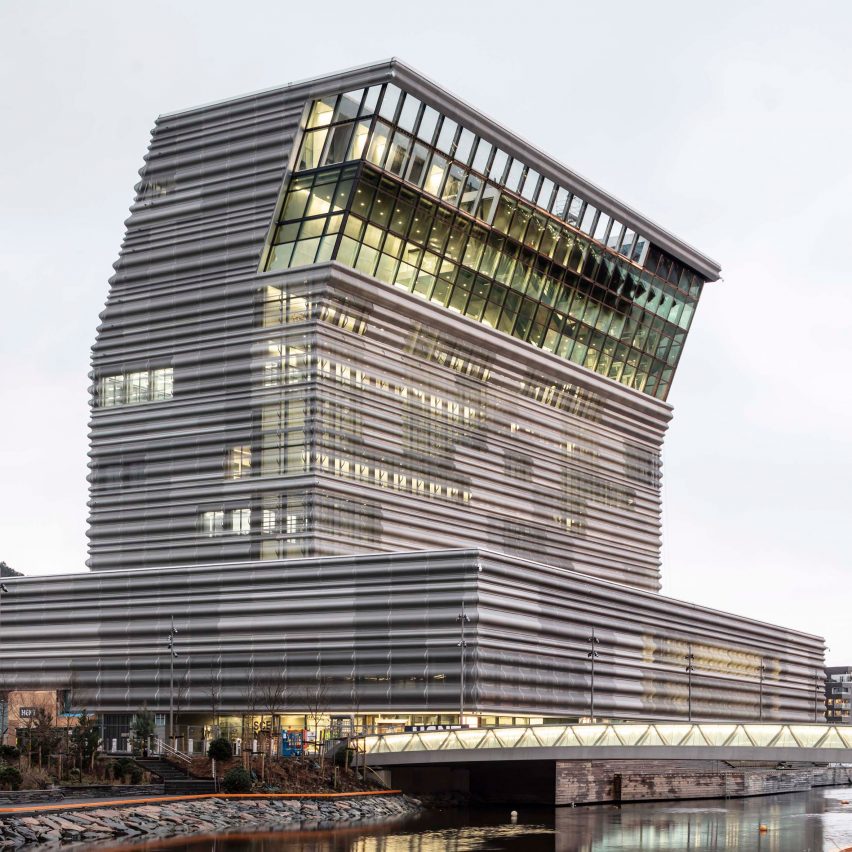 Called Munch, the building by Estudio Herreros building at Bjørvika on the Oslo waterfront houses the world’s largest collection of works by the artist best known for painting The Scream.

The Munch museum occupies a prominent site on the waterfront close to the Oslo Opera House completed by Norwegian firm Snøhetta in 2008.

It will house one of the two painted versions of The Scream painted by Munch in 1893 plus a pastel version of the composition that was inspired by a sunset Munch saw while walking at sunset on a nearby hill overlooking Oslo Fjord.

The building rises to a height of 57.4 metres above the shore and is five times larger than the original museum located in the Norwegian capital’s Tøyen area.

The museum provides over 26,000 square metres of exhibition spaces across its 13 storeys, with the top floor containing an observation deck overlooking the city.

“Greeting people both day and night, Munch is a new reference point in Oslo’s skyline that gives locals and visitors an overview and orientation within the city, the surrounding mountains and the Oslo fjord,” said lead architect Juan Herreros.

The building’s angular form appears to lean towards the nearby opera house and the historical city centre. The form is intended to present a welcoming gesture that invites visitors to enter at all times of the day.

A podium structure at the base contains a lobby that merges with the surrounding public space and anchors the building in the new Bjørvika neighbourhood.

The lobby contains recreational, commercial and cultural spaces that will be used for hosting events such as concerts, lectures or workshops for children.

The museum’s main functions are organised by height, with vertical circulation guiding visitors from the lobby through the exhibition spaces and on towards the terraces, observation deck and restaurant on the top floor.

“The new Munch proposes to experience art within a broader set of public spaces and social experiences,” said Estudio Herreros.

“It will be an extension of the public urban space in Bjørvika, inviting everybody to enter and transforming the museum into an everyday life facility.”

Alongside the extensive exhibits dedicated to Munch’s oeuvre, the museum will contain spaces outlining the history of Oslo throughout the centuries. Different viewpoints on each level will express the connection between the artist and his native city.

Gallery spaces are designed to display artworks of vastly different scales. The 11 exhibition halls include intimate rooms for presenting smaller works on paper, while enormous paintings such as the 11.5-metre-wide Alma Mater mural will be exhibited in galleries with ceiling heights of up to seven metres.

“The diversity of gallery spaces distributed over an even larger number of storeys allows for wide variations in ceiling heights and room sizes,” the architecture studio added.

“The neutrality of the galleries and their integrated design enables optimum facilities to be allocated for both permanent and temporary exhibitions, giving all protagonism to the art.”

The building is wrapped in a skin made from recycled, perforated aluminium panels with varying levels of transparency.

The metal surfaces reflect the shifting quality of light throughout the days and seasons, whilst allowing artificial light to filter through at night.

Recycled materials are used throughout the building, which is designed to meet Passivhaus standards for environmentally friendly construction along with low-energy heating and cooling.

The Munch museum is scheduled to open to the public on 22 October 2021. Alongside Munch’s artworks, it will host temporary exhibitions by both Norwegian and international artists influenced by Munch’s work.

The photography is by Adrià Goula unless stated.