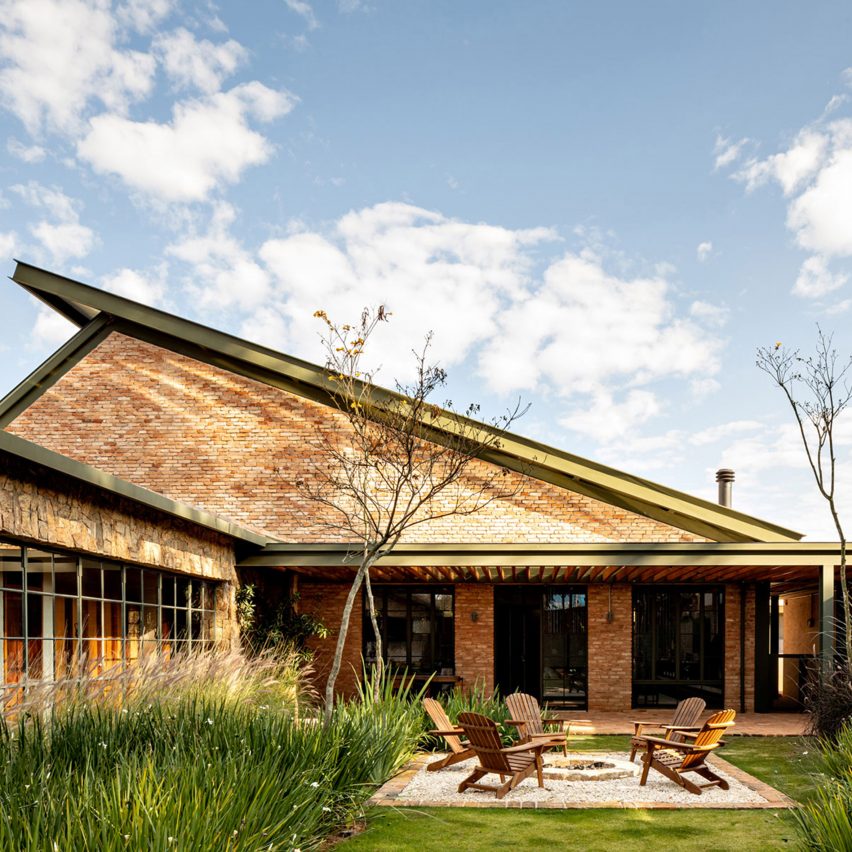 Located in a gated community in Porto Feliz, Brazil, CS House was designed for a family with two kids and many friends. Primary goals for the project included a strong indoor-outdoor connection and opportunities to enjoy the rising and setting of the sun.

In response, Estúdio Penha, based in São Paulo, created an 820-square-metre compound that takes cues from Brazilian farmhouses.

On the north, facing the street, the team placed structures for a housekeeper’s cottage, a laundry room and a garage.

Behind it is the main house, which consists of a central block flanked by two long bars. The central volume contains the social spaces, while the wings hold six bedrooms.

Patios are found at the front and back of the house. A wood-and-metal pergola helps link all of the elements.

The various structures have slightly different looks. The central volume has walls made of salvaged brick – meant to lend a rustic touch –  and is topped with an asymmetrical, pitched roof.

The bedroom wings are clad in rough-hewn, yellowish stone and have gabled roofs lined with clay tiles. The other buildings are concrete and have flat roofs.

To help unify the different volumes, the team added tints of green to metal components, such as the roof edges, window and door frames, and brace beams in brick walls.

“These choices help emphasize the architectural concept of uniting blocks of different programs,” the team said. 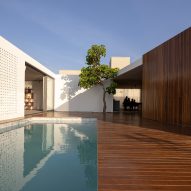 The heart of the compound is the open-plan communal area, which provides space for eating, lounging and playing. Adjoining this area is an enclosed kitchen.

In the main living space, the ceiling rises seven metres at its highest point, creating a lofty feel. A large portion of the ceiling is glass panes set within a metal grid.

“Facing south, coated with anti-reflective film and protected from direct sunlight by the second roof, it works as a skylight that reveals the daylight transforming into the night sky,” the team said.

Throughout, there is a mix of finishes, including exposed brick and stone, cumaru flooring and rose-hued tiles. Wiring and pipes were left visible and arranged in a way that “confers beauty” to these utilitarian elements, the team said.

The architects also used a mix of windows. Some are fixed, others have folding sashes, and some are doors that pivot open and closed. The type is “always in accordance with the spaces under their influence”.

“They are strategically positioned both to accommodate the flow of people, as well as to frame the landscape,” the team said.

Other Brazilian houses include a Curitiba home by Marcos Bertoldi Arquitetos that is wrapped in a wooden curtain and a seaside villa by Studio MK27 that has wide openings and a giant roof.

The photography is by Fran Parente.