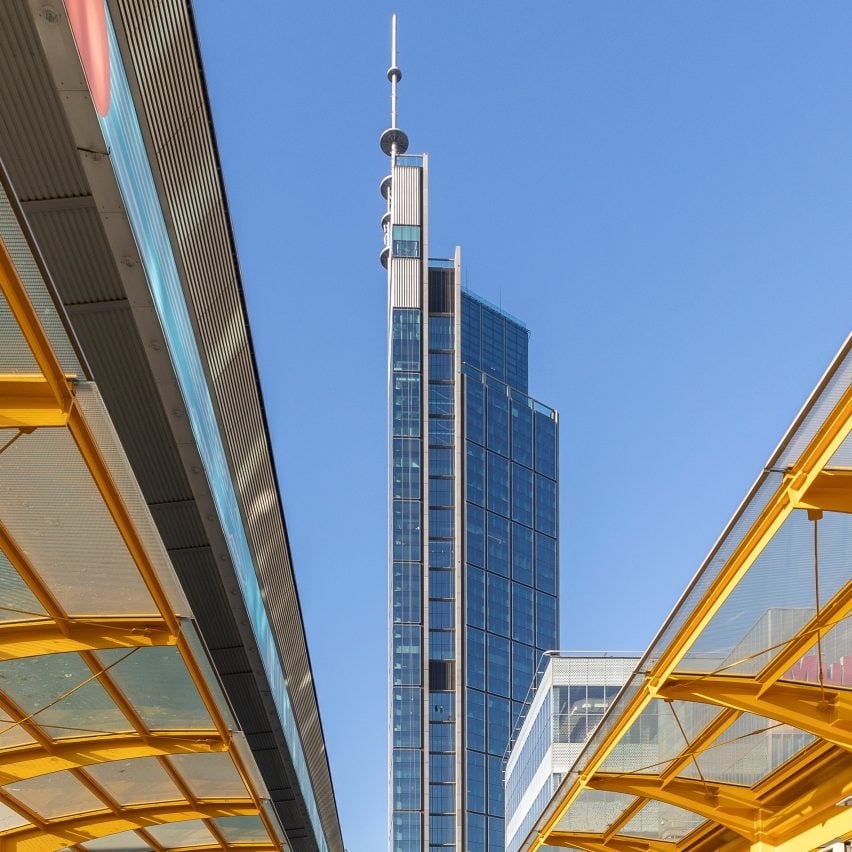 The skyscraper, which houses offices, restaurants, retail facilities and a sky garden, has overtaken Foster + Partners 259-metre-tall Commerzbank Tower – built in Frankfurt in 1997 – to become takes the tallest building in the EU.

First announced in 2017, the 310-metre-tall Varso Tower has a rectilinear form comprised of three volumes that stagger into one as they reach its tallest point at 230 metres. The structure is topped by an 80-metre-tall spire.

It is located in central Warsaw on a site next to the city’s Warsaw Central Station railway station, and forms part of the three-tower business hub Varso Place development.

Engineering company Buro Happold and architecture and construction firm Epstein worked alongside Foster + Partners to construct the building for real-estate developer HB Reavis to use as its headquarters.

The 53-storey skyscraper houses 70,000 square metres of office space for HB Reavis, local and international companies as well as a number of start-ups. Floorplates benefit from large spans and three-metre ceiling heights for open-plan office working.

On the ground level, the lobby has 14-metre-tall ceilings and includes a public plaza that connects the building to those that neighbour it, leading visitors to publicly accessible retail facilities and restaurants. 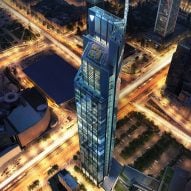 An “urban room” at the centre of the plaza functions as a transitional space between publicly accessible and private spaces. Here, trees were placed between benches that offer resting places and views out through the space’s glazed walls.

Public facilities continue through to the upper levels of the tower, with a bar and restaurant occupying the 46th, 47th and 48th floors. Above this, a landscaped terrace bar is set to be filled with 16 trees and will become the city’s highest garden.

A private viewing deck for office tenants was inserted at 177 metres, while a public viewing deck, accessed via panoramic lifts, tops the rooftop of the 53rd floor. This will be the highest inhabited floor in Poland.

“We believe that the tower, filled with activity and featuring extraordinary rooftop public spaces will make a strong, positive contribution to this wonderful city,” said Foster + Partners head of studio Grant Brooker.

“Varso Tower is a timeless addition to the skyline and a vibrant destination in the heart of Warsaw” said Foster + Partners partner Jedrzej Kolesinski. “In addition to the flexible office spaces, the building gives back to the city by providing a dynamic public realm.”

In Japan, Pelli Clarke & Partners’ A District tower topped out in central Tokyo awarding it the title of Japan’s tallest building.

Photography is by Aaron Hargreaves.