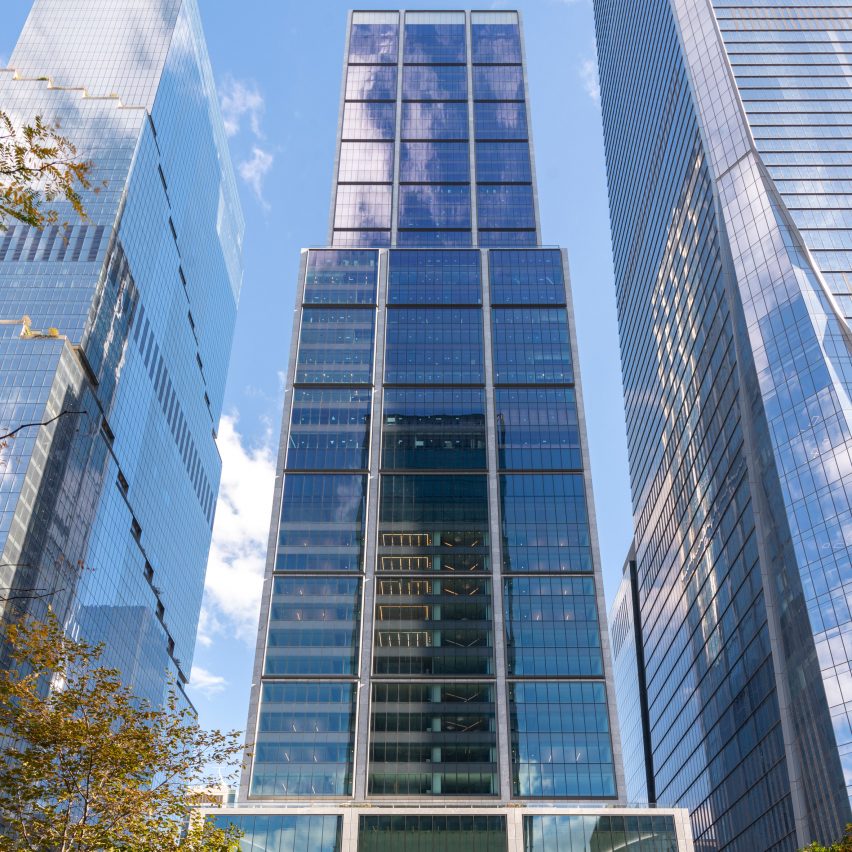 The 78-storey skyscraper is considered supertall – a designation given to buildings that are between 300 and 600 metres tall – and acts as a gateway to Hudson Yards, taking up a full block between 34th Street and 33rd Street on the east side of the complex.

“Our project is a response to the site within Hudson Yards, but its geometry also respects the wider context of the New York street grid,” said Foster + Partners founder Norman Foster.

50 Hudson Yards has a stepped envelope and a symmetrical facade with floor-to-ceiling glass.

Structural elements at the podium and in vertical strips that run up the facade were clad in Viscount white stone, which the studio said was “carefully chosen for the project.”

According to Foster + Partners, an “innovative” elevator strategy was used for the building’s core to open up floor plates on the perimeter of the envelope.

“The design utilizes conventional, double-decker and twin elevators for the first time in a New York commercial office building,” said the studio.

“The building’s primary structure has also been pushed outwards to create column-free floorplates, which support collaborative ways of working and can be easily reconfigured,” said Foster + Partner head of studio Nigel Dancey.

“The careful planning of the core and building section also allows for a range of servicing options which futureproof the building.” 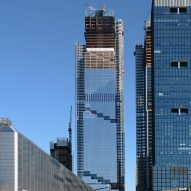 An egress was also constructed for a “purpose-built” tunnel connecting the skyscraper with the adjacent 34th Street-Hudson Yards MTA subway station.

A communal area was placed on the 32nd floor and holds meeting and event spaces.

At the top of the tower, the architecture studio worked with designer Jamie Carpenter on a domed installation that was designed to catch the light during the day and illuminate the building at nighttime.

50 Hudson Yards was one of the first in the US to use engineering firm Despe‘s Self Climbing Kocoon system, a scaffolding method that was designed to provide extra protection and flexibility for workers.

Other skyscrapers within the development include a skyscraper by KPF and a supertall project by Danish studio BIG. American studio Diller Scofidio + Renfro (DS+R) also completed a skyscraper with interiors by New York studio Rockwell Group as part of the development’s first phase.

DS+R also completed The Shed at the site, an expandable structure that hosts events, and Hudson Yards also includes the controversial Vessel viewpoint by the UK-based Heatherwick Studio.

The photography is by Nigel Young unless otherwise stated.