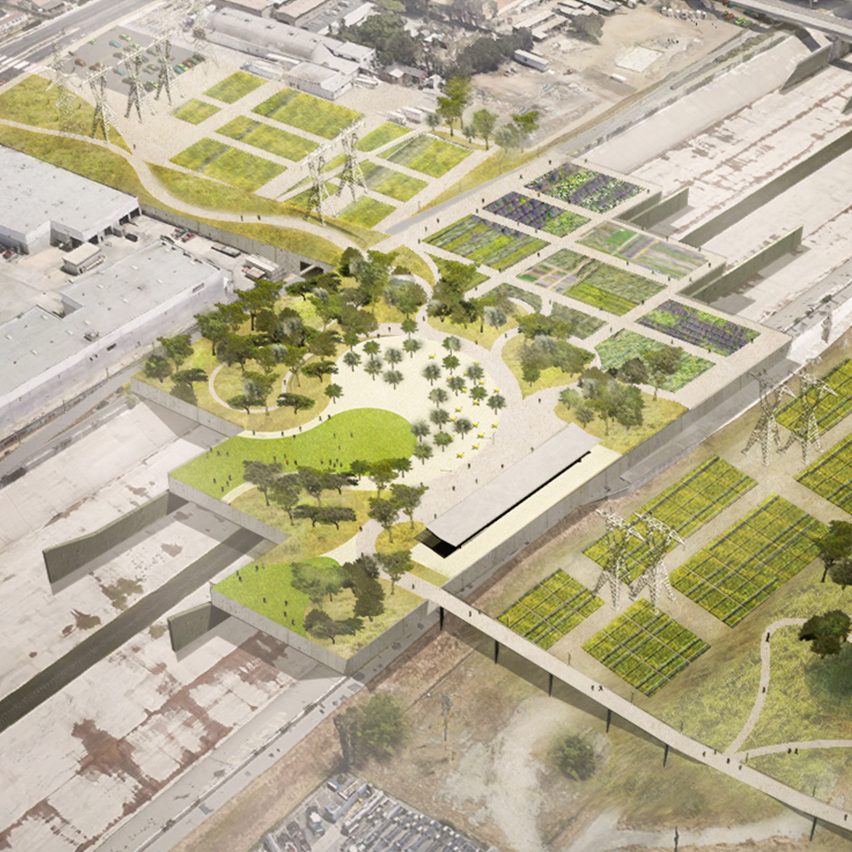 Pritzker Prize-winning architect Frank Gehry has revealed his ideas for updating the masterplan for the Los Angeles River, which include platform parks on stilts bridging the waterway.

Draft plans released last week by LA County are now open for comments from local people for 60 days. Once finalised, the LA River Master Plan will stand as a development guide for the area over the next 25 years.

In an interview with the LA Times, the 91-year-old Frank Gehry spoke about his idea for building public parks raised on platforms over the riverbed.

Concrete stilts would support deep, soil-filled concrete troughs of earth planted with plants and trees, perched four metres above the lip of the concrete-walled channel.

The platform parks would span the width of the river, forming green bridges. These parks could stretch for up to a mile, with enough space for ponds and horse riding trails. Green areas will also be landscaped in corridors alongside the river.

Gehry has also drawn up plans for a $150-million cultural centre that would be accessible by public transport and provide arts and education facilities for local children.

Although some environmental groups are campaigning to return the river to its natural state, the LA River Master Plan group concluded that on the rare occasions the river does run fast and high, the risk of flooding is too great to the urban areas.

Instead, community parks and facilities will be built over the channel. The park plans could take a decade to come to fruition, but Gehry said he hoped the culture centre could be built sooner.

“The river has long created a dividing line down the county, acting as a barrier to equity and opportunity for those who live along it,” Gehry said in a press statement.

“It has been a privilege to work with the county on this cohesive vision of the river which aims to reconnect, revitalise, and strengthen these communities using the river as the conduit.”

Following a series of floods in the 1930s, engineers concreted over the riverbed, leaving a small channel of water running through the centre.

In the ensuing decades after the floodproofing was completed, local government agencies segregated housing along racial lines, systematically denying black, Asian and Latino American residents living along the river access to facilities in a process known as redlining.

The masterplan for the LA River seeks to redress this legacy.

“These park-poor neighbourhoods have always had the Los Angeles River in their backyard, but up until now, they have had their backs turned to it,” added Solis.

“The LA River Master Plan will encourage residents to turn around and embrace the river as part of their homes.”

The LA River Plan is the guiding document for projects aimed at revitalising areas for the communities who live along the Californian waterway.

This updated masterplan has identified 20 sites that could be used for new projects. There are some public funds available, but there are also plans to seek grants and fundraising opportunities.

Frank Gehry was appointed to his design role in the masterplan in 2015. His position proved controversial, with critics arguing that the architect lacked any expertise in landscape architecture.

In 2017 seven proposals to redesign the area were released in celebration of the 10th anniversary of the  Los Angeles River Revitalisation project.