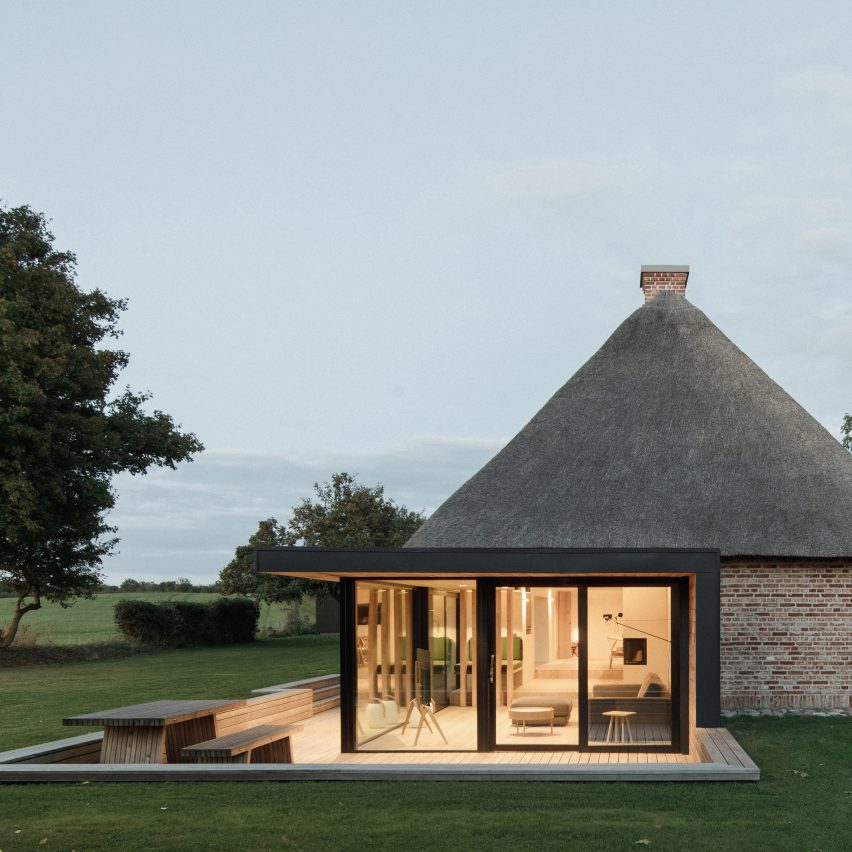 Architects Jan Henrik Jansen and Marshall Blecher have overseen the careful reconstruction and extension of a 120-year-old thatched cottage in north Germany.

Nieby Crofters Cottage was in a dilapidated state when Jansen and Blecher‘s clients, a couple from Hamberg, asked the Copenhagen-based architects to plan the renovation.

The project involved rebuilding most of the structure, restoring the original facade, but completely replanning the internal layout.

A former pigsty was replaced with a glazed extension, creating space for a sunken lounge that branches out from the new family-sized kitchen and dining room.

“When we visited for the first time, it was in quite bad shape,” Blecher told Dezeen. “But the bones of the house were really beautiful once you peeled away all the layers of debris.”

“We decided to rebuild it as much as possible but to also extend it with a discrete living room tucked under the eave of the straw roof at the back,” he said.

Nieby Crofters Cottage is shortlisted for Dezeen Awards 2022 in the residential rebirth category.

Located on the edge of the Geltinger Birk nature reserve, the house was originally built by tenant farmers – known as crofters – who worked on a nearby estate.

The original brick facade was taken apart to allow installation of a new concrete foundation, but has been reinstated almost exactly as it was before.

New windows have been inserted, but were positioned at points where the brickwork had already been punctured by previous extensions.

The thatched roof, which was long past its expected lifespan of 50 years, was replaced, with the addition of a black steel-framed dormer projecting out of one end.

“The roof is very traditional in the way that it’s made,” said Blecher. “We were very particular about the way it was trimmed and how the reach of the roof was detailed.”

Inside, adjustments were needed to increase ceiling heights that in some places were less than 1.8 metres. This involved removing a lot of the first floor to create double-height spaces.

The previous “warren of tiny little rooms” is now replaced with a more modern layout, organised around living and dining spaces at the centre of the house.

“We wanted to create an unexpected space in the centre of the house,” said Blecher.

There are two bedrooms, both at the northeast end of the house. One is located on the ground floor, with an en-suite bathroom, and the second is directly above it.

A utility room and family bathroom are located in the south corner, while an entrance lobby is framed by a freestanding storage unit.

Interior finishes were selected to match the tones of the building materials. Oak provides flooring and, in some places, extends up around walls and ceilings. Other walls are finished in clay-based plaster.

The addition of under-floor heating and triple-glazed windows helps to improve the building’s thermal performance.

Nieby Crofters Cottage is one of a series of projects that Jansen, who is originally from Germany, and Blecher, who is Australian, have collaborated on. They also teamed up on the weathering-steel-clad Villa Korup.

The project was delivered with support from locally based office FF Arkitekten.

The cottage is currently being used by its owners as a weekend retreat, but they couple plan to move into it permanently when they retire.

The photography is by Jose Campos.