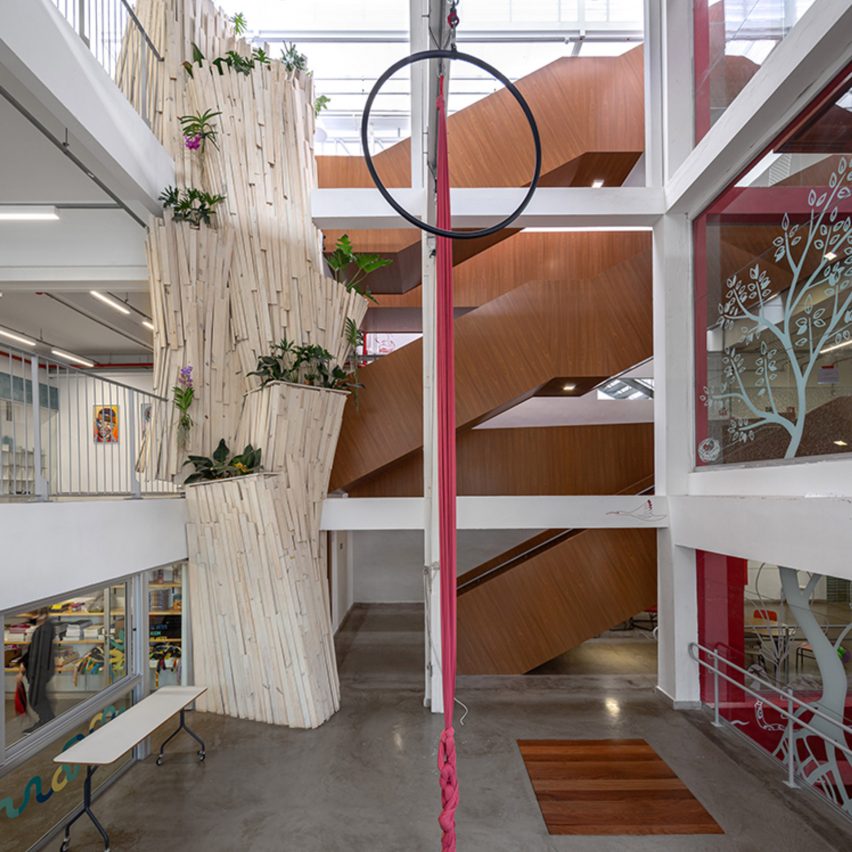 Brazilian studio GOAA has converted a concrete car dealership into a school complete with circus equipment, a glazed elevator and a rooftop ball court.

The school, which serves kids in kindergarten through middle school, has a non-traditional approach to teaching with a focus on learning by doing.

According to the studio, the priority was creating a space that was welcoming and inspiring for youngsters.

“The space was designed to provide a sense of belonging to the students, in addition to stimulating interaction between them,” said the architecture studio.

To create an airy and light-filled school, GOAA made adapted the reinforced-concrete structure by carving out floor plates to create higher ceilings and adding large internal windows.

White paint and splashes of colour were used throughout to create a bright atmosphere. According to the studio, these details “were fundamental to bring life and dynamism into the new space”.

On the main facade, which faces east, the team added corrugated and perforated steel screens in shades of blue and green. The panels can be manually moved as needed.

“The mobile, perforated sheeting filters direct morning sunlight when desired, improving the climatic performance of the classrooms positioned there,” the team said.

On the ground level, which dips ground level, the team demolished large slabs to form a three-storey atrium that doubles as a plaza.

A tree-like installation by artist Peu Mello rises up from one corner of the plaza, and hanging overhead is equipment used for circus classes.

The plaza is lined with bleacher-style seating that accommodates presentations and cultural activities.

The ground level also has a cafeteria and an outdoor garden sporting a mural – by artists Raul Zito and Clarisse Romeiro – that depicts Indigenous people in a boat.

On the upper levels, a library is fitted with sliding glass doors that open onto a slender balcony.

A series of classrooms were framed with drywall partitions, which allowed for “a light construction without demanding too much from the existing structure”, the studio said. 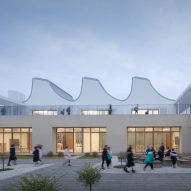 Atop the building is a new athletic court enclosed by tall fencing and a mesh canopy.

The school’s different levels are reached by a staircase made of steel and laminated medium-density fibreboard panels. The team also revamped the building’s car elevator, adding glazed walls that offer a “cinematic view” of the school.

The project has a number of sustainable elements, including solar panels and a rainwater harvesting system. GOAA said the project marks a milestone moment for an area with an abundance of cars.

“Transforming a car dealership into a school is very symbolic,” said co-founder Guido Otero. “It marks a new paradigm of the city we want to build.”

Other educational facilities in São Paulo include the whimsy-filled Red House School designed by Studio Dlux, which is housed within a pair of old warehouses.

The photography is by Manuel Sá and GOAA.