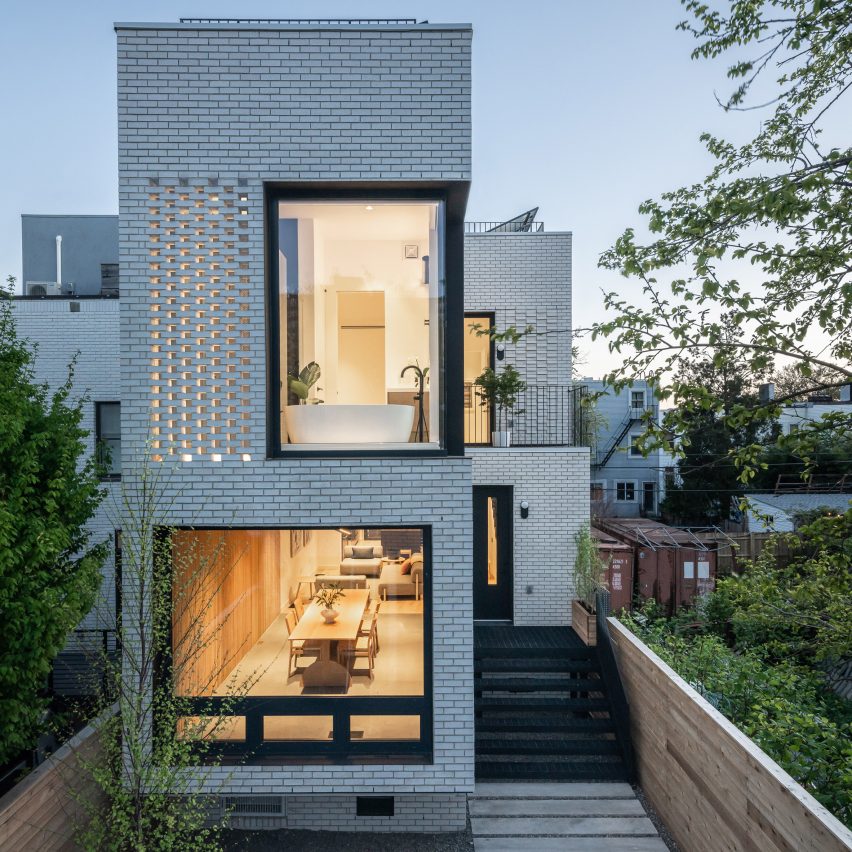 Gradient Architecture has used a planning rule from the aftermath of Hurricane Sandy to help revitalise an unused lot in New York City’s Red Hook neighbourhood, which was severely affected by the 2012 storm.

This white brick house in Red Hook in Brooklyn is located on a compact lot that could not accommodate a single-family home according to the standard zoning rules applicable in the area.

Gradient Architecture PLLC, a local studio, was approached by the property’s owner, developer Phillip Sulke, to evaluate whether a single-family residence could be built on the vacant lot.

“After mulling it over for a few days I recalled reading in the post-hurricane Sandy building guidelines for substantially flood damaged areas that there were some provisions for ‘redeveloping’ homes that were ‘substantially damaged’,” Krone told Dezeen.

Upon further research, Krone discovered that there had previously been a building on the vacant lot, which the city had demolished in the aftermath of the Hurricane. This information meant that they could develop a property to match the previous building’s footprint, in addition to an extension to meet current planning guidelines.

“The design process from this point was about how to work around the home’s existing footprint but to expand it with added 10-foot-wide sections that zoning would allow,” Krone explained.

The new residence is comprised of a single-storey garage at the front of the lot, near the street, and a two-storey townhouse beyond. A small courtyard separates the two structures.

The garage is furnished as an elegant study, with a thick carpet, a desk and a comfortable armchair that open out onto the central courtyard via two sets of doors.

A few steps lead up to the main residence, which occupies almost the full width of the lot. The 10-foot (3-metre) extension that was added to the home contains the resident’s dining room on the main level and the primary suite’s bathroom upstairs.

“There are a few residential programs that would fit in a 10-foot-wide space,” said Krone. “All of the material choices and architectural expression are about highlighting this unique townhouse condition,” he added.

To highlight this compact space, the walls and ceilings are lined with tightly spaced wooden battens.

At the back of the home is an open-concept kitchen, which has a dining island and opens out onto a large rear deck. The living room is in between these two areas, anchoring the centre of the floor plan.

A wooden staircase runs up along one of the exterior walls of the house, which was painted in a dramatic black hue and is lit by ornamental sconces. Upstairs, there are three bedrooms: two overlooking the rear yard, with the primary suite facing the garage and courtyard.

A bathroom off the landing is shared by the two smaller bedrooms and is illuminated by a skylight. Krone used simple white tiles that help the room feel spacious and bright. 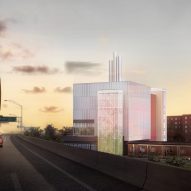 The primary suite enjoys a small balcony above the front courtyard. An ensuite bathroom is located within the new extension to the home and features a glass-walled shower and a soaking tub placed in front of a large window at the front of the home.

According to the architect, this choice of brick complements a “handsome” house nearby.

“I wanted the houses to play off one another rather than try and compete,” he explained.

The extension features a pattern that highlights the form, while the main part of the property is built with a more regular pattern.

Other townhouses that have been completed in New York City’s most populous borough include a residence in Carroll Gardens that was built around a magnolia tree and Amity Street Residence, a “minimal but warm” renovation by design studios Selma Akkari and Rawan Muqaddas.

The photography is by David Heald.